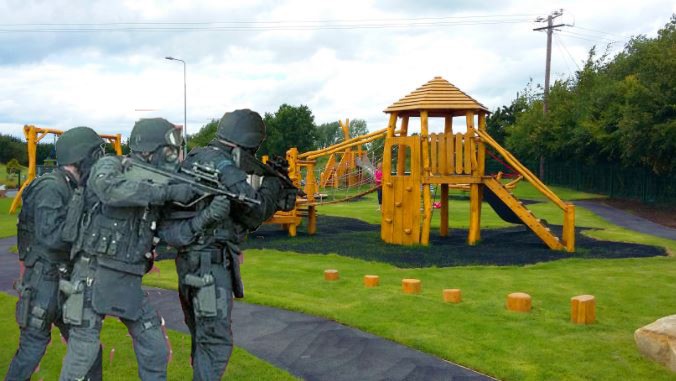 The officers will be equipped with M4’s, riot gear, tear gas canisters and have a direct line to air support, in the case of mothers’ groups refusing to leave.

Patton was quick to praise the preparedness and training of the unit and that demoralising the rank-and-file Police with totalitarian duties the last 18 months, was not a waste of time and money at all.

“These guys have had months of experience since March 2020 kicking the shit out of bankrupt small business owners, arresting pregnant mothers and a lot more,” Patton told a packed press conference.

“Make no mistake, if you’re letting the kids enjoy their childhood, getting fresh air and putting them on the swing set then you will be arrested and charged and Victoria Police makes no apologies for that.”

The unit will deploy live this week and be on patrol at swings and slides at parks across the Melbourne metro area.

Kids are dirty little spreaders, so this is welcome.

for the first few weeks, the cops should have beanbag rounds or rubber bullets, so as not to make a mess. If the kids don’t get the message by then, it’s on their own heads.

Kids should be confiscated and given to the locals in Alice Springs where they can grow up as real Australians and not little EZFKA units ….

Names are changed to protect innocents
Reply to  Peachy

Kids are dirty little spreaders, so this is welcome.

welcome to HK. they did this shit 18 month ago…

So, somebody school me on vaccines and stuff, please… (sorry, long post).

i have read this:

message seems to be:

can someone comment about whether I have understood that mostly right?

also I have a question about element #2: assuming in Australia everyone gets jabbed and they do manage to eliminate the virus completely here through extreme lockdowns.

does this act as a circuit breaker & prevent #4, #5 & #6 – because by preventing the virus from circulating (super lockdowns) we also prevent it from evolving into a nasty mutant?

or does this not help – because the mutant virus will still evolve somewhere else (say Indonesia) and once we import it, it’ll kill us all?

Here’s some schooling, get a vaccine ya fucktard

Go punch a woman in the street tough guy 🥊

That’s all you’ve got? Lololololol

does this act as a circuit breaker & prevent #4, #5 & #6 – because by preventing the virus from circulating (super lockdowns) we also prevent it from evolving into a nasty mutant?

Not an expert on medical stuff, but
neither the original wuflu or any of the variants originated in australia…
other than that probably.

Yes that is my understanding too, essentially if you have non sterilising vaccines then mass vaccination of the populace will only give the virus more hosts / odds that a mutation that is vaccine resistant in this case it has already, the lambda and delta+ variants.

There is a scenario where this lockdown might have been at the perfect time as lambda / delta+ takes hold in the US and EU, we are going to have a chance to avoid it getting here and if …. big if, we actually manage to get proper quarantine we could be the lucky ones that avoid the lambda and then I am sure lambda+ and so on and things end up like my prediction where there will be 50% of the world population left in 5 years time. But we manage to hold them out till a proper sterilising vaccine is found.

Note that there are a lot of people that, due to the weaker of the population breeding are going to be wiped out if the virus continues to virus the way that it has.

Have a read of this article, it will help to explain, the main scary part being how the virus already has the ability to evade your immune system due to it having attributes of HIV / HEP

In short, if you are not already, get healthy, get your immune system in tip top shape, get out in the sun and enjoy life as much as possible because that is going to be your best chance to get through this.

That article also explains why it is likely Delta emerged in India:

“The virus’s speedy entry using TMPRSS2 explains why the malaria drug chloroquine didn’t work in clinical trials as a COVID-19 treatment, despite early promising studies in the lab10. Those turned out to have used cells that rely exclusively on cathepsins for endosomal entry. “When the virus transmits and replicates in the human airway, it doesn’t use endosomes, so chloroquine, which is an endosomal disrupting drug, is not effective in real life,” says Barclay.”

Taken as a prophylaxis Chloroquine would have the same effect as a ‘leaky’ vaccine, meaning it drove the virus evolution by acting as a filter in India, where Chloroquine use was widespread.

My bet is that we even get our own special variant, with Delta infecting those with a single dose of vaccines the chances of a local vaccine resistant variant increases greatly, perhaps we don’t have the number of hosts needed, but I am sure that once it gets into US / Africa and EU then all bets are off on what might mutate, at the end of the day the virus is gonna virus, especially given the “uniqueness” of this one where it has attributes never seen in a coronavirus before.

Note: Reading that article makes me realise that there was no way in hell that this was zoonotic, this was engineered in a lab for sure.

Note: Reading that article makes me realise that there was no way in hell that this was zoonotic, this was engineered in a lab for sure.

For sure, back when I was posting at MB I was even mocked by DLS for suggesting it was.

An early rumour in relation to the virus at the time it emerged was that the Chinese were doing experiments trying to come up with a virally delivered vaccine for HIV using a cold virus as a delivery mechanism. This would explain the presence of several segments of viral DNA that agree with AIDS, some of the binding mechanisms, and the syncytia that are found with this virus and no other.

I find this theory/story to be more plausible than the possibility it was developed as a bioweapon, but I take zero degrees of comfort from that either – because the law of unintended consequences can be just as great as deliberate destruction.

Agreed I would be a lot more positive were it to have been zoonotic, the problem with experimental viruses is that they will not behave as expected, this could mean that it ends us, or it could die out in the next few months, odds are greater on the ending us unfortunately.

That is one of the worse case scenario, but it is very plausible and has prior examples of it occurring e.g. Markek’s disease.

It is pretty much the case that Covid is endemic and we have to learn to live with it, so I am ignoring the zero Covid noise and the four steps out and started pondering about it. After the election the mass immigration will be in full swing, so we will have thousands vaccinated with partially effective vaccines. Most will be in the densely populated parts of Melbourne and Sydney. So cases and hospitalisations will be non trivial. Will Melbourne and Sydney enjoy yearly lockdowns over winter? Where is the expansions of the hospitals to deal with this? The hospitals are overcrowded at the best of times unless you go private.

yeah, if this line of reasoning is to be believed/if it is right, then the BBs will still be susceptible.

and all that they will have achieved in this 18-36month pantomime is to have made sure that they will drag a whole bunch of younger people (who would have been OK with the original virus) down with them.

TBH I think that actually getting the virus gives you better protection than the targeted spike protein protection that comes with the vaccine, so had we let it rip in a controlled manner in the first round we could be better off in the long run.

had we let it rip in a controlled manner in the first round we could be better off in the long run.

Short term pain for long term gain is something that very few societies/nations are prepared to do these days.

I suppose it doesn’t help that many entities that are nominally “nations” or “societies” are not really those things and are mere economic zones…. 😯

Also pollies with a spine, while not perfect Sweden has done the best out of this, but then they have a actual health system with capacity rather than 10 years behind population growth like we are here.

The budget and the 1% of this economic zone depend on immigration. It will happen. They will find ways of bypassing quarantine like letting universities manage it themselves for vaccinated international students.

The budget and the 1% of this economic zone depend on immigration. It will happen.

but, on the other hand, the very lives of the 1% would seem to depend on zero-Covid.

if that’s right, creating a situation of “accidental” quarantine escape is not in their interest. But let’s think this through – what policies WOULD keep the 1% safe while resuming mass human imports?

The 1% live in large houses well away from the people they import. As long as they are immunised and away from the danger, wholesale importation can proceed.

This is what I’ve been saying also. It’s become apparent for ages the health system will need more investment but here we are doing nothing because the vaccines will save us

doing nothing because the vaccines will save us

and if they don’t, they just declare “whocouldanode?!?!”

Except this virus targets baby boomers so isn’t this an example of sheer ineptitude even by the cashed up boomers than run this joint?

ThTs what lockdowns are for – a further line of boomer protection.

Apparently pulling kids off playgrounds is a step too far and the cops have said that they didn’t sign up for this.

Where is this being reported?

Herald Sun (not a subscriber) and also ABC News

Have you been submitting articles to Pox on the side Timbo?

I guess Kindergarden Cop was due for a remake…

lol…. I hope people ignore this police state rule and simply just take their kids out to play. It doesn’t stand up in court

It would certainly make for some dramatic footage, a squad of cops dispersing a playground full of kids and mums.

would go absolutely nuts on teh YouTube and the social media. I reckon it could be a bit of a money spinner:

would go absolutely nuts on teh YouTube and the social media. I

nah, the YT algo suppresses this stuff to prevent it from going viral. there’s a vid of NSW police pepper spraying a 12 yr old girl and it only got like 5000 views.