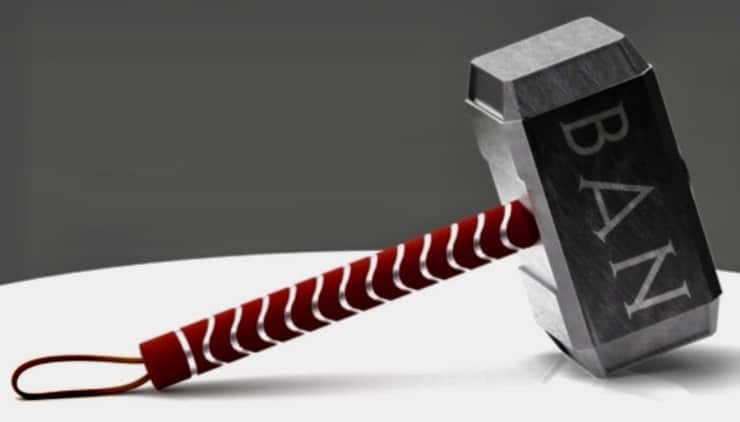 The comments section of Macrobusiness was temporarily shutdown tonight, after a comment supporting Scott Morrison’s temporary travel ban from India managed to get past the censors.

The comment from irregular user ‘Johnno1223’ stated that ‘the ban was only temporary and should be used to protect the citizens of EZFKA. Plus it has the added benefit of continually shutting down the migration ponzi, why are MB fans so angry about this?’

This triggered off a shitstorm in the comments section, bringing many MB subscribers and non-subscribers alike out from under their beds to pile on the anti-LNP heresy.

This was ended when the moderator formerly known as Gunnamatta aka Ritualised Forms acted swiftly to bar Johnno forever and temporary disable comments.

“That could have really got out of hand. DLS, myself and Becker had done everything we could to ban dissenting opinion,s but obviously we weren’t being vigilant enough,’ Gunna said.

“I thought people had already had enough of my 3000-word whinging about not being able to get my family home for the last 12 months, I was wrong.”

MB’s actions drew praise, with poster skippy commenting “well, where are all the COVID deniers now? Chortle.” Johnno said he would respond, but stated on another forum that he and everyone else had been banned and the skippy’s retort was ‘the usual patronising LARP.”

no really though that place is swallowing itself alive, its suffering the same death all sites that over moderate themselves and cant tolerate different opinions eventually do

half of its stock poster base are now here

I thought I was the only one sick of gunna’s sermons in the comments section.

You are not alone, I got sick of reading them too.

Most of the quality posters left long before this place got going.

Spat my coffee out.

Way too accurate. We need a MB bingo card or something.

That would be worth subscribing for.

“well, where are all the COVID deniers now? Chortle.”

That would qualify as skippy’s most coherent comment ever, if it was actually his…

Imagine having your life savings actively managed by DLS and Becker.

the fund is managed mostly by damien klassen i believe, whos not a bad guy.

I think they’ve done okay – I’ve been looking after my mum’s investments for years and over that time I’ve made several calls to pull the plug and run for cover as trouble was brewing, both times our advisor prevaricated and we ended up losing a chunk of money. Part of what I want in an investment fund is someone whose willing to pull the plug, which is what they did last year.

Sure with the benefit of hindsight, they could have definitely gotten back into the market earlier and think there is probably some valid criticism there, but I tell you those gains wouldn’t have made up for the sting of the losses, and the fear and sleepless nights as the market collapsed last March.

IMHO DLS’s over-arching investment thesis is only really blighted by is optimism that we are still living in a market based economy where system failure alla the Great Depression is something that our elites would allow. The cynicism which I and many others have in regards to our perception of the world allows us the freedom to believe that nothing will be allowed to fail, as breaking our debt bondage and the slavery that goes with it will never be allowed.

To have such a view you can only be a true pessimist, which I maintain DLS is not. Bank on EZFKA – it won’t be allowed to fail, our continued enslavement depends upon it.

IMHO DLS’s over-arching investment thesis is only really blighted by is optimism that we are still living in a market based economy where system failure alla the Great Depression is something that our elites would allow.

so it’s only a complete misunderstanding of the environment bloke finds himself in.

There’s practically zero fund managers who view the world with the pessimism that our fundamental outlook requires, certainly none in Australia. Many might be right for the wrong reasons, that they believe that the Govt and CB will always save the system, but they will never address the implications of what that means; “re-forging our rusting chains, and repairing the crumbling walls to our prison“.

IMHO having the foresight to sell ahead of the market, excuses the timidity at re-entering. But that is just me an in regards to having to look after someone else’s money, which is honestly a peculiarly stressful responsibility. My own approach to risk is entirely different, I actually favour the bar-bell approach in complete life asset allocation. Lots of low risk, lots of high risk and virtually nothing in between.

Nevertheless they predicted it and moved when others didn’t. They finished selling up by the time the msm started hyperventilating about the racism of it being called WuFlu.

a broken clock is supposed to be right twice a day

wtf is the use of “predicting” if they cant capitalise on it?

those who didn’t predict shit and just sat there in asset markets have done better than those who “predicted” the crash than failed to buy soon enough to ride the bounce.

Fuckin get over the MB stuff. It’s one thing for it in the comments (bound to happen seeing as nearly all here are ex-MB), but posting fake and absolutely boring as shit satire is ridiculous.

Well, I’m facile enough to enjoy these pieces. And to pen some in that vein as well 😀

Anyhow, if you’d prefer different content, I repeat the invitation for you to write some.

id actually like to see a piece from you. And from Coming as well – need some of that anger and sneering to counteract the bubbly positivity of the rest of the EZFKA crew.

Last edited 1 year ago by Peachy
3

I’d love to write a comprehensive breakdown of Covid, pandemics, lockdowns and vaccines

Just refer to your bountiful collected work of past comments – I’m sure it would be easy to harvest enough for at least one article!
🧐

Why don’t you write a short introduction… a “part 1”.

then you can add sequels to it, it can be like an unfolding adventure!

A fly in your ointment
Reply to  robert2013

…it is based on a true rumour.

Niko
Reply to  A fly in your ointment

I actually am against the ban as we have to look after all Australians that want to come back. The reason why they are not allowed back is because Scott and friends don’t want to build proper quarantine facilities in the outback but want to constantly put us at risk by using hotels in all major cities. The new Indian variant obviously scared the shit out of them so they placed a ban and technically abandoned all Australians that are currently in India.

Every time there a quarantine breach in any city is Libs fault. Don’t blame some poorly paid and trained security guard who wanted to score on the night.

But for MB to ban the comment from that guy was just laughable. I’ve seen some outright racist comments and some outright far right comments there that should have been banned but still stand to this day and then they go after this? lol

Anyway, yesterday I saw an article there UE finally blaming Scott for all city quarantine outbreaks as he failed to implement safe quarantine measures. I was surprised it wasn’t Dan’s fault.

there is no loyalty running in either direction and certainly no obligations owed to the people. People are only required/wanted to the extent that they benefit the wealth of the economic zone, certainly not for their own sake.