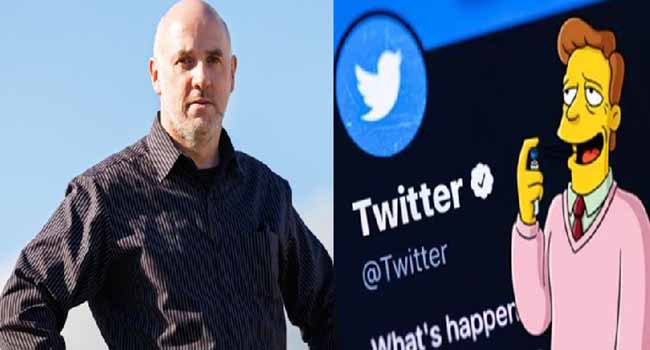 An Australian conservative has expressed his satisfiaction that dedicating undue amounts of time to unmasking a mediocre Twitter account, is exactly the political priority and most important fight in Australia’s history.

Dave Kennedy, from Sydney, donated large amounts of money to grifter of the year Avi Yemeni in his court battle to unmask PRguy17. Kennedy believes the mounting numbers of crises including energy, hospital, inflation and supply change need to take a back seat for a while.

“Look mate, Australia’s in a death spiral but the best way to fight back against lefties is to give undue attention to some Israeli grifter using the opportunity as a trojan horse to end internet anonymity. This certainly won’t ever be weaponised against us,” Dave said.

“The Online Trolling Bill that Scomo introduced is basically an internet censorship bill, so the best way to protect internet freedom and freedom of speech on the internet is to support doxxing and witch hunts against anonymous Twitter accounts – this is what we need to win.”

After months of also simping for Elon Musk, Kennedy said he’ll be focusing his political activisim to support both this and the Austraian version of the Johnny Depp-Amber Heard distraction, the Lisa Wilkinson and Brittany Higgins saga.

It won’t stop his next grift… won’t be surprised when he asks for funds to expose the real PRGuy. 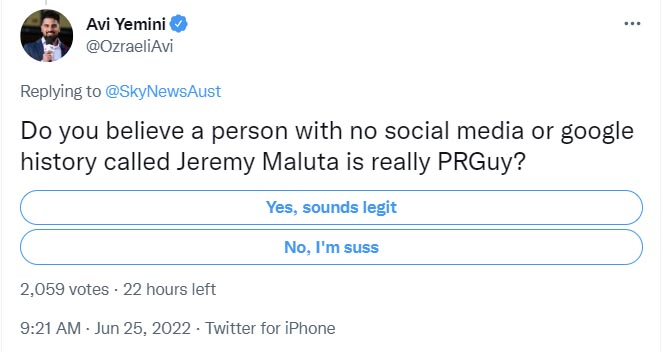 But seriously, the guy is an idiot. If he genuinely believed that PRGuy was part of the state government he should have just put in a FOI request. Then the response (or lack of response) could be used to fuel more conspiracies and generate content. It certainly wouldn’t be as expensive as legal action, but then that probably goes against the grift playbook.

A fly in your ointment
Reply to  Gouda

guys like Yem Eni are 2D players. cannot fathom the 3rd dimension existence outside their show

Didn’t he recently fly to Davos? There is no end to the grift.

They have to justify getting people to continually donate shekels to their ‘legal fund’ somehow.

“Look mate, Australia’s in a death spiral but the best way to fight back against lefties is to give undue attention to some Israeli grifter using the opportunity as a trojan horse to end internet anonymity. This certainly won’t ever be weaponised against us,” Dave said.

actually the most shocking and depressing result possible

that anyone would spend their own time to shill for chairman dan , with no financial reward

at least Jordan shanks gets paid for being an ALP shill

That’s true but I’m leaning towards it being an associate told to take the fall for Dan’s staffer.

At the end of the day who gives a fuck if he was on dans payroll or not. Its an insignificant Twitter account and Dan hasn’t gone down despite all the crooked shit of the last 8 years and two appearances before IBAC. WOFTAM.

The reveal video is pretty funny.

Tom Tanuki’s video on how Rebel News sources donations also not bad either in understanding Avi’s grift tactics, although I have no idea what he means by “lag.”

i dont like avi but ive always wondered why people think domestic abuse/violence is somehow the worst category of crime that exist, and those who have committed it at some stage are irredeemable monsters. the reality of it is most of it is bi-directional with both partners hitting each other up, usually though its the guy who gets charged. i have no idea whether thats the case with avi but a lot of it really just comes down to two pieces of shit who cant conflict resolve properly, with both sides acting like absolute garbage to each other.

the depp case he referenced at the start of the video very much fit into this mould too.

I don’t think it’s about DV being the worst form of crime (murder, paedophilia would rank higher to most), but it parallels PRGuy’s approach to use the media’s own tactics and hyperbole against them.

Some would argue that historically the left side of politics is too nice and avoids smearing and personal attacks, so labelling Avi with whatever fits – short, Jewish, DV abuser etc is now fair game. Having a water marks also gives the finger to any news outlet who wants to use the photo without acknowledging Avi’s past crimes.

The point is that a neutral observer is unlikely to rate the credibility of a convicted DV abuser highly, just as someone who believes there’s a larger Zionist agenda may be prone to dismissing him too.

It doesn’t just apply to Avi.

Don’t forget, Steve Keen will forever be that guy who lost a bet on house prices and walked up Mount Kosciuszko – those who rely on the mainstream media for their news will never take him seriously.

As Avi is finding out, smears stick.

i dont have any disagreement with that

his vids are lazy clickbait, though they’re somewhat less lazy than jordies bc at least he goes out onto the street and interviews ppl etc

in a way the covid era was a boon for these kinds of grifters (not jordies – who assiduously avoided talking about all of it bc it was unflattering to his alp bosses) and now it has all come to an end, i dont know how they will be able to continue producing content

Total Psy-op in my view to further drive acceptance of Digital ID and ending internet anonymity. Back to the ‘Chopping Board’ Avi…… Grifter of the highest order.

Hey Peachy – remember that conversation from the other day that was triggered by Coming’s Post?

Congress just passed a bill that would give the Fed a 3rd mandate: use monetary policy to discriminate on basis of race until they achieve equality of outcome.

What goes down in the Biden regime soon follows suite in its client states, maybe a milder dose for us at first, but it will come hard and fast soon enough:

Treasurer Jim Chalmers has indicated that the size and composition of the RBA’s board are among the issues that will be considered. He also says the government wants the board to be comprised of people representing all parts of Australia and all parts of the economy.

It starts with diversity but always ends up with the pursuit of “Equity”…. usually native born residents’ equity.

Can anyone see the rest of the article? On the one hand it superficially sounds like a good idea to me IF the diversity they add is on the basis of class, but all too often the only diversity they are after is ethnic diversity.

I would much prefer to have a Plumber of Ermo’s ilk sitting on the RBA Board than a literal Brahman Indian immigrant University, lecturer representing Australia’s Brahman class of intellectuals.

LOL’s at Levo for actually writing an article on RBA board representation without apparently mentioning one word on proposed changes to the Fed in the pursuit of diversity.

FFS one of the biggest drivers of the GFC in 2008 was Clinton and the Democrat’s policy to expand home owner equity and ownership that directly lowered the credit criteria for lending back at the end of the 90s. It triggered a gigantic bubble…. hell you don’t even have to be an economics nerd to know that fact, all you have to be is a big enough movie buff to have watched the Big Short.

This policy change by the Fed will be just as big a fuck up, only it will be based around race, which is why imho when the next bubble bursts and the race based lending institutes that will subsequently proliferate that will needing bailing out, they will get to keep their homes, in order to avoid accusations of racism and of course “equity”.

Once again EZFKA unearths a economic/political news factoid that more mainstream sites trip over themselves to avoid, no matter how relevant, because they’ve been mindfucked into believing that noticing the manner extreme leftist progressive ideology is infiltrating our Institutions & Corporations, i.e. Woke Capital, is some sort of impolite, socially unacceptable far-right crime against decency.

Last edited 1 month ago by Stewie
1