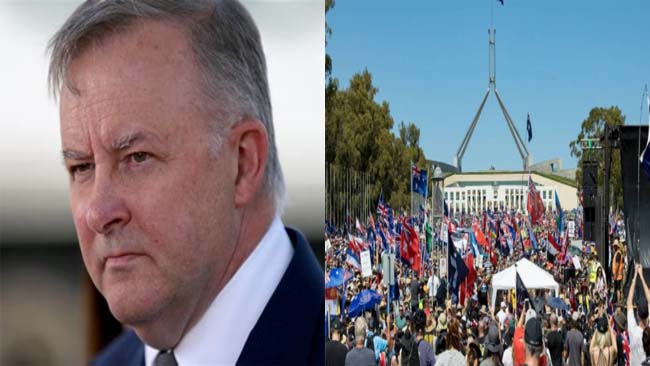 EZFKA opposition leader Anthony Albanese has vowed to fight for the EZFKA working class by telling them stop protesting over vaccine mandates.

After a record crowd descended on Canberra at the weekend to protest the federal government’s vaccine mandates, Albo took the opportunity to tell them to fuck off home and stop whinging about their jobs and bodily autonomy.

“We are the party of the working class and we will fight for the little guy,” Albo said.

“Now fuck off and get out of Canberra. You working class bogans aren’t welcome here.”

An Albanese staffer is reported to have attempted to run over ‘Queanbeyan bogans’ on his exit out of Canberra, but this remains unconfirmed.

Let’s be honest, the party represents its member and its most active and most vocal members are inner city so called progressives. Ermo has little influence on the party, it is more influenced by your DLS’s, Fitzsimmons, etc.

Take last election, the lefties on Twitter were celebrating that the less educated, the Christians, the lower paid abandoned Labor. These people are the working class and Labor has no interest in them.

The sooner the major parties are annihilated the better. I would much rather locals who want better roads, schools etc. in the area than a career globalist politician.

Albo is negatively gearing four properties. Another two-faced cunt making money from the young Australians he pretends to represent.

What was it that Trotsky wrote about democracy?

This new apparatus of power should embody the dictatorship of the proletariat (and in some places also of the rural semi-proletariat, the village poor), that is, it should be the instrument for the systematic suppression of the exploiting classes and their expropriation. Not false bourgeois democracy – that hypocritical form of the rule of the financial oligarchy – with its completely formal equality, but proletarian democracy which gives the working masses the opportunity to make a reality of their freedom; not parliamentarism, but self-government of these masses by their elected organs; not capitalist bureaucracy but organs of administration formed by the masses themselves, with the masses really participating in the government of the country and in socialist construction – this should be the model of the proletarian state. Its concrete form is provided in the system of the Soviets or of similar organs.

none of these issues are new, see.

also this… reads a lot like all the recent stuff about WEF and NWO and great reset and stronger cities and whatever, no?

In other words: Is all toiling mankind to become the bond slaves of victorious world cliques who, under the firm name of the League of Nations and aided by an “international” army and an “international” navy, will here plunder and strangle some people and there cast crumbs to others, while everywhere and always shackling the proletariat—with the sole object of maintaining their own rule?

democracy is what the ancient Greeks had, and it worked fine

Opposition Leader Anthony Albanese had a simple message for the protesters: “Go home.”

“If you think that’s a way that you win support for your view in Australia, then I think you’re very wrong.”

He encouraged the protesters to consider “the facts that are out there”, “and the facts are that you are far more likely to avoid getting COVID if you’re fully vaccinated”.

Mr Albanese said the protesters were ignoring the pressure health systems were under and the hard work of healthcare workers over the previous months.

“Have some respect for the people who have been working beyond any reasonable criteria … working extended hours, under extraordinary pressure to keep their fellow Australians safe and to look after them,” he said.

Prime Minister Scott Morrison has weighed in on the protests across the nation’s capital.

“My message to them [demonstrators] today is Australia is a free country and they have a right to protest, and I would ask them to do that in a peaceful way and a respectful way,” he said.

Mr Morrison reminded protesters that state governments were largely responsible for vaccine mandates, and it was not a Commonwealth issue.

“I’m going to be very clear when it comes to the issue of vaccine mandates: [The] Commonwealth government has only ever supported mandates that relate to aged care workers, disability workers and those who are working in high-risk situations in the health system,” he said at a press conference.

Which one sounds like he’s more in touch with community sentiment?

I think Albo might have just had his “Indian grandma visa” moment for this upcoming election.

As the protest theme song goes….”Just another….prick in the wall”

Abo has been given shit advice here. The cunning/neutral scomo wins this one.

Labor in Australia is the same as it is in NZ and Britain. It is controlled by career political parasites that take orders from the donors, media and other powerful interests, and never the members. Although what few members are left in the parties are largely just participating in branch staking activities and don’t care in advancing policies that would benefit the citizens of the country anyway.

However, there was an exception to this recently where in the UK Jeremy Corbyn, a genuine socialist not aligned with corporate or elite interests, was elected by the members against the wishes of all of the media and nearly all of the entrenched parasites in his own party. This led to some of the most unhinged attacks on a politician by the media in living memory. With coordination across the entire corporate media spectrum, putting paid to the fallacy that their is any diversity in the media.
On the other hand the media and elite is doing all it can to protect Sir Keir Starmer, who is just the reincarnation of Tony Blair without the charisma and some additional highly questionable ideas around child protection. Additionally Starmer was the main reason that Labour did so badly in the 2019 election as it was him that pushed for a second referendum to be included in their policies.

I agree the only solution is a new political party. However, that party also needs to be focussed on changing the governance processes in the country to give citizens a greater say over developing and voting directly on the policies and laws they want implemented rather than leaving it to the corrupt puppets otherwise known as politicians to do it.

Albo is going to wish his mum never banged that Italian deckhand once Scomo is done with him in May.

The joys of a cashless society.

I despise this Trudeau fucker. What is it with all these leaders: Trudeau, Macron, McGowan, Ardern, Biden etc? It’s like they are competing for the who’s the biggest cunt award.

I wonder what they have been promised to sell out their countries.

Seems pretty cheap for the destruction of their country’s. I reckon they will first against the wall once their usefulness ends.

If Australian politicians are anything to go buy, they are pretty cheap to buy off.

It seems to be a common theme amongst them. Completely lacking in substance. Nothing to offer only cheap, empty platitudes.

To keep their positions.

In counties where politicians can climb up the ladder only proportionally to their career encumbrance, the leverage required is minimal.

“He encouraged the protesters to consider “the facts that are out there”, “and the facts are that you are far more likely to avoid getting COVID if you’re fully vaccinated”.”

NSW had ten of thousands of cases per day, nearly all of them were vaccinated. This isn’t faulty logic, sloppy presentation or poor memory. This is gaslighting.

Indeed.
Wasn’t the claimed effectiveness of “full vaccination” without booster 4% over in WA land. Maybe the science is different over there….

Yes and the Pfizer CEO even said that the current vaccines give little if any protection from Omicron and by little I assume that he meant 4% as that seems to be the “popular” number to spout.

Just shows the lies, lies and more lies from the government and health department.

the beatings will continue until moral improves

He comes across as a sleazy fucker. The Canadian people deserve a lot better than this gimp. At this stage he is practically begging for a bullet and I hope he gets it.

That’s a quote from Albo, not Trudeau.

Ok cool. Thought it was Trudeau. It doesn’t surprise me that Albo would say that. He’s another gimp. We are in a lot of trouble if he wins the next election.

It will be a repeat of Biden if Albo gets in.

I think so too. A big woke wankathon, all trying to outwoke each other. And while we are distracted with that we will be completely fleeced by the banks, taxes and inflation.
I think most of us are aware that they are aiming for cashless society and digital currency. Anyone have a prediction on when they make that move?

You mean actions have consequences

Well that one took longer than 12mths 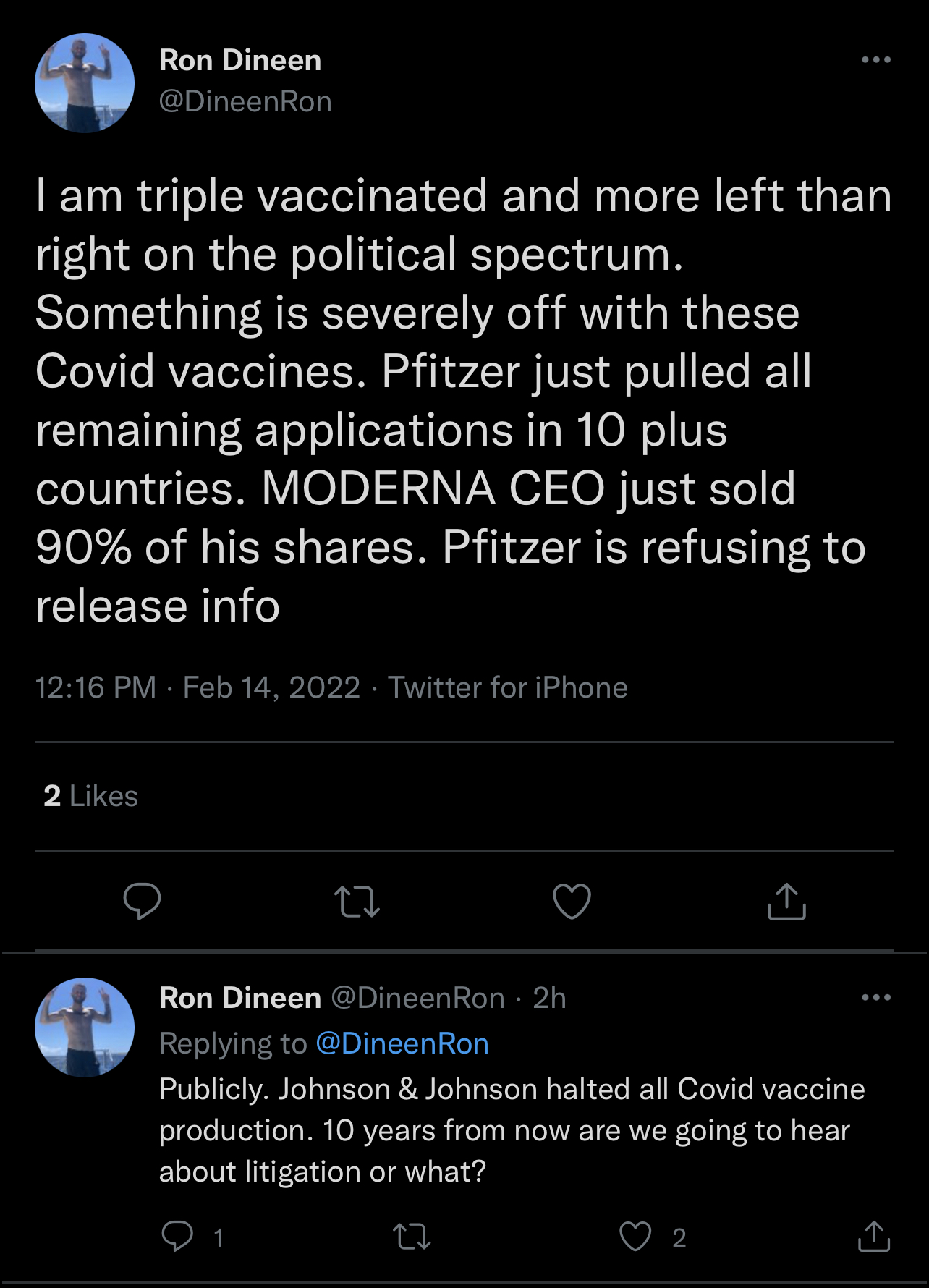 I think we need to be a bit careful about this sort of breathless revelation.

A bit of googling reveals only two Pfizer withdrawals….one from the FDA for use on children under 5…..based on insufficient data submitted on a three-dose regimen…..the other from India, based on the Indian regulator requiring trial data based on an Indian trial population to reassure them about any genetic differences peculiar to that population.

Both of these withdrawals were extensively publicised at the time of occurrence.

Regards the J & J production pause……there appear to be fairly logical commercial and logistic reasons for what J & J say is a temporary pause.

I think we are going to see more of this sort of repositioning in the vaccine market, as more and more vaccine brands emerge, reducing individual market share and profitability, and more people world-wide become “fully vaccinated”, thus reducing demand.

Of course, there could always be ulterior motives for such decisions….but that is something that only time (or a whistleblower) will reveal.

Last edited 11 months ago by plaguerat
2

Right out of the EZFK? Play book

What goes around comes around. But is there any point. In the current climate in 10 years it will be privatised like it’s commonwealth bank predecessor.

It’s a good idea (or was in it’s day)……but nowadays it would be brushed off as creeping socialism.

And even if it did get off the ground, as you say, it would very quickly become another bloated corpse on which the venture capitalists could gorge themselves.

Or even better, it could be sold back to the people who actually owned it in the first place…just like CBA, Qantas, Telstra, CSL,…etc. ad infinitum.

The Ryanair twatter…
If an airline flew everywhere but not to Cuba, is it still an airline or is it an anti-airline? Should passengers choose when, where and if they fly or should there be a mandatory flights to a destination preselect by the airline?

Like arguing with an infant. It boils down to this for them. If you are not 100% with us you are 100% against us. So much for compromise. For a disease like Ryanair to try enter into this argument and lecture others is laughable.

Remember, you can only say “I told you so” once a day and it must be to different person every time.

Vindication, like revenge, is a dish best served cold 🙂

And while that’s happening, we are still getting this sort of selective crap from “our” ABC: