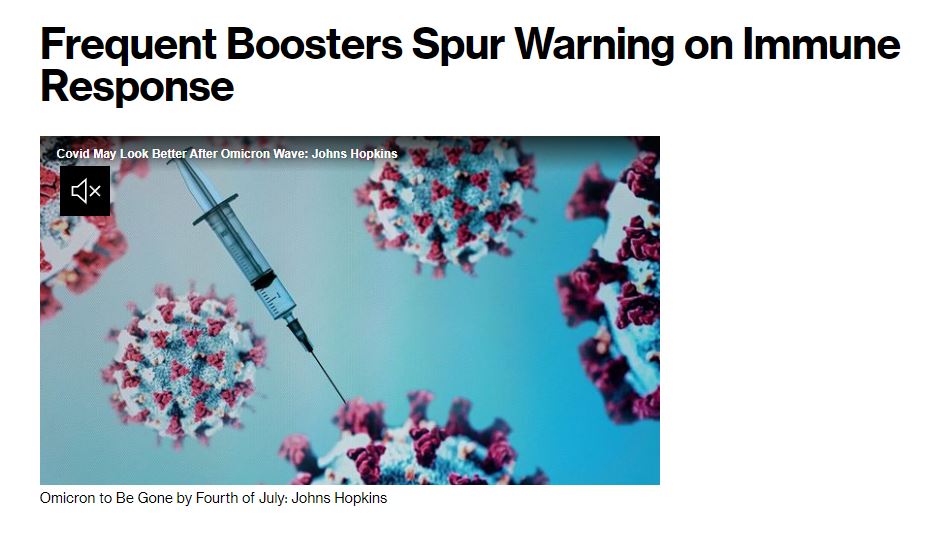 But I wonder why they could be running with the above story now?

Could it be because of this?

“This hospitalisation was necessary because of a serious complication due to a dysfunction of the immune system,” the statement said. “As a result, all official activities of the President of the European Parliament have been cancelled.”

Sadly this story doesn’t have a happy ending…

But back the original Bloomberg article, there were two things that I thought were very interesting about it.

Firstly it came out the day after the President of the European Parliament died, and secondly, as far as I can tell or have noticed, this is the first msm news article to actually seriously raise the possibility of a link between the vaccines and immune disease, other than in a condescending manner and either directly or implicitly framing the suggestions as a ‘conspiracy theory’.

In my honest opinion this is the start of the msm walking back the narrative around booster shots. True the article suggests that it is only a matter of frequency. As far as repudiations go it was pretty mild, suggesting that a booster every four months is too much and six would be ‘safer’…. but imho it is only the start.

Just like the claims of vaccines providing immunity and preventing transmissibility, this is how they will walk back the narrative. Soon the msm will be saying that 6 months is too frequent and it should be yearly boosters. Two years from now they’ll be publicly scratching their heads pondering the collective hysteria that was behind this insanity, but will of course look everywhere and point to everyone but themselves.

I could be wrong, but I reckon it is something to keep an eye on.

you could be reading too much into it

my interpretation of the Bloomberg article is that people will get “tired” of getting jabbed and it’s impractical to do it so often , so reduce the frequency to coincide with waves and target protection temporally

not that they are admitting that the jabs cause immune dysfunction

…apart from the title of the article “Frequent Boosters spurn warning on immune response”.

I’ll admit I could be reading too much into it and concluded as much with my proviso – but it will be interesting to watch this space and see how and/if the narrative changes.

PS: I never went away, I’ve commented occasionally but not diligently, so the odd comment I’ve made is usually several days late to the conversation. Been distracted with summer.

You’re right the headline and the article are completely disconnected

In fact here it is from the horses mouth

Fuck, the geniuses have worked out that “boosters” every 4 months is not a good idea… and very hard to sell as as a solution.

possibly, they worked it out in the reverse order, but still…

Twitter and other big tech has lost all credibility, to the point where if big tech censors it in anyway then I know for sure that it is the truth.

There will be UnAdmission of nuttin.
Narrative changed in the lead up to Christmas, suddenly the baba-yaga was exposed to be a mannequin of Cherry Kunt (not sure how to spell her name) waking up economic units of ezfka in the middle of the night telling them to get jabbed or else…
My take it was a preparation for a paradigm shift in the wake of the new variant peddling (Peachy’s Principle applies here).
I hoped mandate may slowly go but overlooked that the cleanest and healthiest group remained Un’ed.
No news from Novavax either, we only got Novax.
Hence my current view that this is the beginning of the tidy-up and a wrap up. Mind you, the mandate will stay. It will be simply overlooked and at some stage it will be whomever received 2+ jabs can leave the prison, the rest will be cast out.

You all need to stop with the conspiracy theories and follow the science! Jabs and boosters protect you from this deadly disease! That’s exactly why the lepers unvaccinated must be excluded from the society (emphasis mine)!

“Life will become very difficult for the unvaccinated from January 31,” Premier Mark McGowan said.
“These will be the broadest proof of vaccination requirements in the nation, and they will not be removed any time soon.
“We know that those in hospitals around the country are mainly unvaccinated people, so I urge you if you aren’t vaccinated – do it now.
“If you don’t get vaccinated, the message is clear – we will not let you put others at risk.”

“We have seen the disaster in New South Wales when they removed proof of vaccination requirements in mid-December. We have learned from their mistakes and are determined not to repeat them.”

I cannot comprehend how he continues to believe (apparently) that it is the unvaccinated who are responsonsible for transmitting COVID across the east coast.

It has all been foretold…. 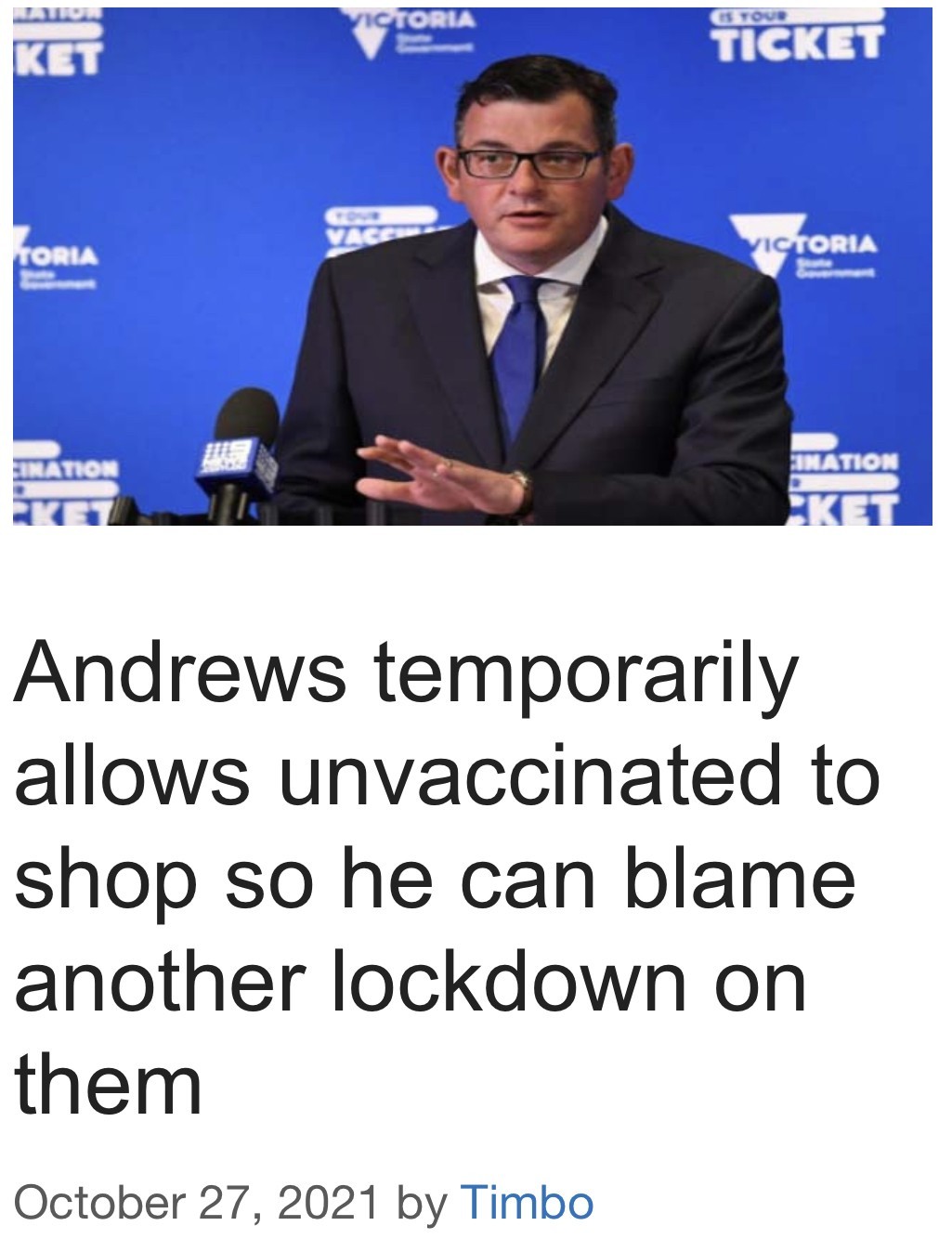 I cannot comprehend how he continues to believe (apparently)

What they say and what they believe may not have anything to do with each other. I find it harder to believe no one in the media is calling his bs.

If just one reporter would ask why if the CEO of Pfizer has come out and said that the vaccines give very little if any protection against Omicron then why are we continuing on this path of trying to get everyone vaccinated.

Journalism is dead in the country ….

he said 2 shots and was pushing boosters…

Booster were only a slight improvement, he was pushing the new Omicron booster / shot

However if you look at the bigger picture, the jabs cost $1 to make and are sold for $20-$30, however the new Pfizermectin (not sure what it’s real name is) would only cost about 20c per tablet and sells for $700 for course, so two tablets a day for 2 weeks for example means around $50 per tablet. So I would expect that to be pushed more than the jabs soon anyway.

the new Pfizermectin (not sure what it’s real name is) would only cost about 20c per tablet and sells for $700 for course, so two tablets a day for 2 weeks for example means around $50 per tablet. So I would expect that to be pushed more than the jabs soon

You are a smart man.

the jabs are definitely waning in terms of popularity, and so the time is drawing near for some new medical “miracle” product.

pfizermectin is going to be great:

the sales pitch writes itself! Governments are going to lap that shit right up!

and Pfizer is going to make more profits out of fewer doses. to help the other product along, they’ll probably release a study confirming that pfizermextin is more effective in people who have previously had the jab, too…. No doubt.

And they can string that shit out in perpetuity too, if they keep inventing/manufacturing/releasing new strains.

its pretty goofy tbh. the guy who made it comes across as mental to me (topher field).

I didn’t mind it bit yeh wasn’t that great.

Tophers a grifter. As soon as Avi Yemeni was in it I was like, yeh this is likely going to be mediocre.

I don’t disagree with you.
I just found his video to be casting the lights on sequence of/and events many most will turn the blind eye to it. Or simply will not want to connect dots.
To sum it up, there is no better video as yet that squarely paints the Tirana and fashionista dickdan is and what Australia have descended to. Pure Vaccinazism

DictatorDavid
Reply to  A fly in your ointment

Yep thats my take and why i posted it. To be fair it was put together and released super fast, so not of the best quality. I think because he wanted it out before elections.

avi, rukshan, cossack, monica schmit etc are all grifters, just on the other side of the fence

On a whole very average, but there were 2 things that stood out to me.

1. DL. We have to get this bloke into the Federal Senate.

2. How Dan and others spoke at press conference…hopefully they hang around Dan and Co for the rest of their lives

Good catch on the EU president. Perhaps those non-natural nucleotides got him. That might also explain why the EU approved novavax well before the USA, UK or Australia (which still haven’t).

Blink and you would have missed it.

In other news, it looks like Omicron could have been another lab leak …

Good to hear from you Stewie. I hope you’re doing well.

It’s quite strategic to get the Omicron Pfizer vaccine out there starting March because cases will have peaked and will keep falling all the way into the northern summer and stay suppressed until October with or without vaccines. Pfizer and governments can attribute the drop into cases into the booster vaccine and it will show he importance of getting boosted to not only protect yourself but your vulnerable family members too.

Yet in the middle of summer, the conditions in our cities probably the least conducive right now to airborne respiratory illnesses of almost any major cities on Earth, yet COVID completely out of control by any measure.

I could not have predicted just how little protection the vaccines give.

Multiple sources suggest negative protection against catching it. God knows what it does to catching other things…

They want to kick Djokovic out because he sets a bad example to those who refuse to get vaccinated. I would have though the vaccines themselves are doing a good job of that with 150k cases with 90+% vaccinated during the height of summer.

Interesting anecdote, all my unvaccinated friends who have had whuflu had nothing more than cold like symptoms, all the vaccinated ones were down for a week or more.

A bad flu is my experience so far. A 6 or 7 on a scale to 10. 5 days and counting of symptoms but symptoms subduing as we speak. Likely infected last Friday or weekend.

My daughter had 3 days of symptoms 1.5 days of high temp, a bit of sore throat and nuttin more

Glance the news dotcomdotau, the Der Angriff of local vaccinazi parties and the paradigm of narrative is progressing in the shift.
They now regularly publish information which supports a moderate anti-jabba-dabba viewpoints.
Is it a sinking ship they abandon?
Is this a planned phase?

Is this a planned phase?

The planning is never more than a week into the future, as witnessed by constant backflipping and change of messaging…

The planning is never more than a week into the future, as witnessed by constant backflipping and change of messaging…

Luckily they are dealing with idiots, so there is never a problem with this.

that’s on one view. On the other view, they are deliberately doing what looks like back flipping. But in reality, they are just getting both alternative messages out there. So they can’t be wrong. And training up the EZFKA units in the crucial skill of doublethink.

A very good observation, so far the best explanation.
Tnx.

Is this a beginning of a trend?
Julia Robers is apparently the next in the line