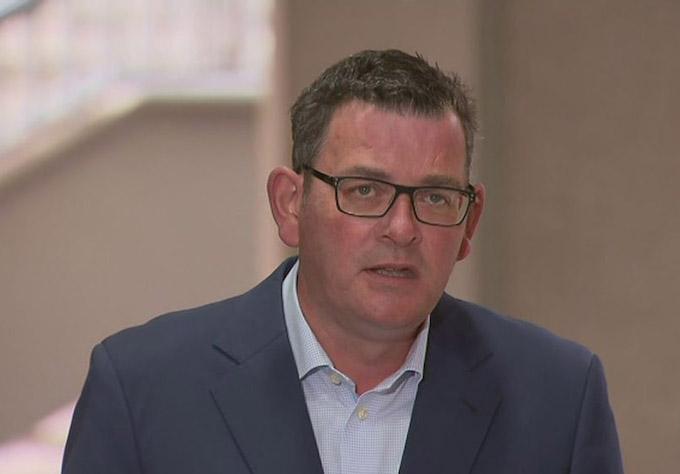 Victorian Premier Daniel Andrews has said that Victorians will get their freedoms bac,k as soon as they give up the few remaining ones they have.

The Premier gave a terse press conference where he said that he may have to implement measures such as total bans on bodily movement, drinking water and ‘inhalation of any kind’ to ease lockdowns.

“The only path out of this is total and utter submission. I’m still amazed at the overwhelming capitulation of Victorians in such a short period of time and I thank them for making my job easier,” Andrews said.

“Make no mistake, I will stand here and make veiled threats and women and emasculated men who lacked strong father figures early in life who have replaced me with their absent father, will obey my commands.”

Andrews further encouraged dob-ins to the COVID snitch line until the “camps were built” and said he may just turn the PCR test cycles up if there “aren’t enough cases by Wednesday.”

FFS, they’re talking about another curfew for Victoria.

Have they published the study demonstrating the effectiveness of the previous one?

I reckon you are about 6-8 weeks behind NSW down there.
It will slowly creep out of control.

A fly in your ointment
Reply to  bjw678

how much a lockdown is effective is subject ot unforeseen forces, e.g. designed malicious activities.
Hypothetically speaking, all it takes is one person with “special rights” travelling across the region to cancel the effects of padlocking the mind and the body

The90kwbeast
Reply to  A fly in your ointment

Per my ongoing theory, there are way less dodgy students in essential jobs in Brisbane than the immigration ground zeros of Western Sydney and West/North Melbourne. Maybe they’ll be fine.

how much a lockdown is effective is subject ot unforeseen forces,

I’d say random chance is as much or more an influence than malicious activity.

this is absolutely hilarious

can you imagine if this party was muslims instead?

‘They are good people who have clearly made a ridiculously poor decision,’ he told 3AW.
‘I suspect that they thought this couldn’t happen to them, so the wanton disregard for the law was done not out of malice but out of ignorance.

can you imagine if this party was muslims instead?

technically, the difference is a statistical error

‘Does this count as exercise?’ Amorous couple have sex on Bondi cliff https://www.dailymail.co.uk/news/article-9896529/Covid-19-Australia-Amorous-couple-caught-having-sex-Bondi-cliff-Sydneys-lockdown.html?ito=native_share_channel-home-preview

let us be frank, the man (The Daniel) has an “ear” fro the problem.

Not everyone has sacrificed all their freedoms. Hi-vis has not had to sacrifice as much as others.

Sounds so much better than:

I find this captures the vibe more, if not quite so much the pop sensibility:

This time the bullet cold rocked ya
A yellow ribbon instead of a swastika
Nothin’ proper about ya propaganda
Fools follow rules when the set commands ya
Said it was blue
When ya blood was read
That’s how ya got a bullet blasted through ya head
Blasted through ya head
Blasted through ya head
I give a shout out to the living dead
Who stood and watched as the feds cold centralized
So serene on the screen
You were mesmerized
Cellular phones soundin’ a death tone
Corporations cold
Turn ya to stone before ya realize
They load the clip in omnicolour
Said they pack the nine, they fire it at prime time
Sleeping gas, every home was like Alcatraz
And mutha fuckas lost their minds
Just victims of the in-house drive-by
They say jump, you say how high

Interesting to read the comments today on the embee article

90% of them (including members and LVO himself) are over it

real moral high ground . all the usual suspects that you remember and love

Aren’t you a paying member? Weird that they’d take your money and not let you have your 2c. Then again, perhaps they are more EZFKA then we give them credit for!

Quite a few paying members have gone mysteriously silent over there.
I don’t think it’s as uncommon as you think.

What does this Luke idiot think will happen? Metro Melbourne has a cop shortage given they are manning the border. Vigilante Luke is going to find out what will happen when you get on the wrong side of civil disobedience.

Well they probably don’t have a shortage, but they are assigned to other tasks like lockdowns, going to check on compliance, so I wouldn’t assume they would come to your help instantaneously.

Dont worry about Luke’s particular position – it’s not really meaningful one way or the other.

this is the beauty of it – the divisiveness of all this COVID stuff.

this will fragment the hell out of the population and allow them to be controlled & led anywhere.

I’d consider myself a fairly calm sort, but definitely feel that I’m starting to lose my shit.

Last night nearly ran over a jogger wearing all black. FCKN Victorians and their love of black clothes!

Today got a call that I have do some cleaning up at the old rental property. Garden overgrown or some BS. It’s been over 10 years, and they’ve never mentioned the garden once on any inspection.
I ask them if it’s ok if I kill everything? If they want it back to how it was, I have the old photos where the shrubs were tiny, it was basically just dirt and I’ve got plenty of weedkiller.

Drove over as they told me the back gate was unlocked. Of course it wasn’t. Drove to the office, and guess what they didn’t have the keys.

By this point my rage meter was overflowing, and I just tell them they’re idiots and I’ll come back next week.

On the way home I thought it would be cathartic to order a hedge trimmer and really go to town.

They never bothered to get green bins, so I was thinking about filling them up taking a photo and reporting it to the local council.

Also open to suggestions for any parting “gifts” I can leave.

Prawn heads carefully hidden in strategic locations…in downpipes and drains for example… make a place real attractive a week or so later.

Paint a big cock n balls (or your choice) on the lawn in weedkiller.

Turn off the water at the mains, and then fill the pit with a bag of rapid set concrete.

Araldite in the door locks.

Call the Scientologists claiming to be your landlord, and ask them to come sign you up.

I could go on and on…

Sprinkle carrot seeds across their lawn – apparently the tap root of the carrot makes them extremely difficult to eradicate.

Was chatting with a nurse this evening who told me that she once took a dump and left it outside her real estate agent’s office. I know she’s nuts, but I think I’m in love!

Small handful of craven ALP astroturfers? Mate, they are most of the commenters when I looked before.

it seems the closure of parks was the final straw.

no one seems to recognize the slippery slope that Australian state governments got on last year.

Closing the parks is a great idea.

In 6 months, they can flog them to developers, given nobody’s using them.

Friends and colleagues are furious about the closure of parks.

Luke is a house troll.
Not a shill because the shill has to be another person. Unless we take internet alter ego as another personality

hahahaha look at the phags in the macro thread about vic lockdown today, swampy chimajim and now even footsore have taken up the role of the nightstick wielding ghetto police, keeping the peasants who are starting to question the whole fuckin operation in line. absolute shit show this is:

haha i rocked up in the comments to post a few choice statements, i bet they’ll be deleted so i saved them

first time ive posted in over a year i think

yeah i can still see your comments

Can you give me a shoutout there, and tell everyone that I got banned

Last edited 1 year ago by stagmal
1

If he hasn’t worked it out himself by now, I don’t think he ever will…

rofl I don’t think the caps helped you, but it would have been deleted in any case.

very rational sounding doctor describing how she is gagged by AHPRA

drsmithyMEMBER
August 16, 2021 at 4:45 pm
Another point is that childcare centres are (I assume, ours certainly was last year, but kids are in school now) preventing sick children from attending and know who all their attendees are.
I’m actually a bit surprised people were using playgrounds in largen numbers at all. They were one of the the first places we stopped going during the initial restrictions last year, along with most of the neighbourhood, precisely because they’re such an obvious vector.
REPLY

Judging from timing of your post, you saw it around the same time I did. I rarely post there, but that comment stood out by far and is a classic example of Agent47’s chart from the other day.

Judging by the comment, it may have kids. They will be some screwed up kids.

Work colleagues and friends are absolutely furious about the playground rule. Many are seeing it as a vindictive rule given what happened over the weekend.

We have made houses so small that people need playgrounds for their kids.