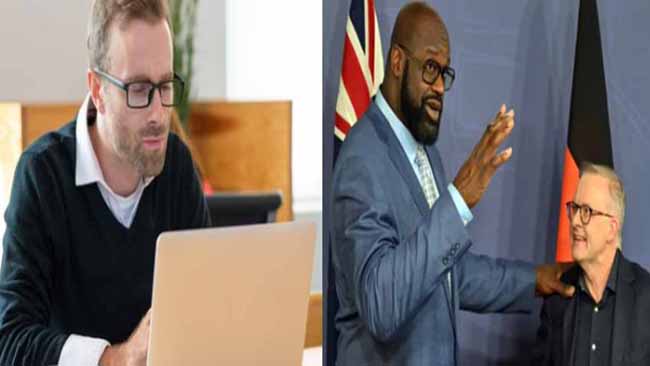 An Australian man has unleashed on basketball star Shaquille O’Neal this week, after his appearance with PM Anthony Albanese in support of the voice to parliament trojan horse.

Newtown man Tim, took a break from his usual online bashing of the United States’ domestic policies on abortion, guns, healthcare and industrial relations to tell Shaq that he had no business interfering in Australian internal affairs.

“What the fuck has a yank basketball player got to do with Indigenous issues? Stay out of it, you bloody yank,” Tim commented with venom on the Age.

“Fix your bloody issues with abortion, healthcare, freedumb and guns mate. You could learn a bloody thing or two from Australia, in fact, we should write the legislation. Americans have no idea, I’m so lucky I live in Australia.”

Tim then spent the next two hours tweeting about the NRA and the recent Supreme Court decision to overturn Roe vs Wade.

Shaq to reform our constitution

Amateur hour there in Canberra.

I can see it now:

”Tristram…we really need to spice up the discussion about this stupid Indigenous Voice thought-bubble that Albo has, can we take it away from any serious discussion or talk of us fucking with the Constitution, what have you got?”

”Dunno Tim? You were Campaign Director for the Yes vote in the Gay Marriage Referendum. You are Albo’s Chief of Staff, you must know how to put lipstick on a pig!”

”Fark moi Tristram. Do I have to do everything? All the half smart Aboriginal’s oppose it. How about we get a big dumb friendly one to endorse it? Any rugby league players?”

”Nope. They’re all on Domestic Violence charges, or refusing to dance on the Mardi Gras float we built for them”

Tim spies a photo of Shaq appearing for Sportsbet in a classy ahindig at the weekend and points, “here’s one, big black fella! Call his agent!”

Shaq’s promoter meanwhile reads today’s Cash for Comments request list, ‘The Voice’? I thought that show had finished? Oh well, it’s probably 5 minutes, smile for photos with Delta Goodrem then off to the airport. Dunno why the Australian Government’s paying the bill, but $20k is $20k.

the whole thing is a clownworld virtue signal bullshit facade that will effectively do nothing, so with that in mind what’s the big deal with something silly/ridiculous like shaq being involved in it

should have roped in o.j simpson and dennis rodman as well

Last edited 5 months ago by stagmal
1

the whole thing is a clownworld virtue signal bullshit facade that will effectively do nothing, so with that in mind what’s the big deal with something silly/ridiculous like shaq being involved in it

If that was all it was shaq could fuck off and albo could do it tomorrow.

The fact they want a referendum means they want to make a serious change that parliament does not have the power to do(or they are even dumber than I thought).
The gay marriage thingo was a plebiscite not a referendum because they could change it any time they wanted to.

so what exactly is it going to do? what the fuck is it? any reasonable perspectives on it? i don’t understand it at all it’s a mystery black box.

No yank should exist outside of it’s borders.

Voice is a trojan horse for the biggest power and land grab ever, using indigenous as a battering ram.

As soon as I saw Mark Leibler shilling for it I knew what was happening.

It is a year to the day since the US military killed 10 innocent civilians in Kabul, claiming they had hit an ISIS terrorist “facilitator” in a “righteous strike.” It quickly became clear that they actually killed an employee of a US food charity and half a dozen neighborhood children. The Pentagon investigated itself and found no one had done anything wrong. The survivors were offered blood money and US visas. The Globalist American Empire in a nutshell.

if only the war would be as an adventure as depicted in this Radio “Free” Europe report from the front lines…
A nice example where story telling technique and narrative support overtakes and swamps the hard facts to contrary.

Watching these videos on UA advance in retaking its territories reminds me of EmBee where a real life even accidentally coincides with their narrative – they claim it as a direct consequence of their action.

Huge plot twist. Who knew Shaq cared so much about Straya? Certainly not I. Seriously, whoever the staffer was who made this a reality must have fallen out of a time machine straight out of 1999.

There’s any number of reasons why this is a big deal and deserves more shit pile on than the MSM will give.

It is part of a big push now to get our Constitution changed, if approved Albanese’s thought bubble will create massive problems for the courts and parliament, years of grift and billions in wasted taxpayers money. If you think we have enough overpaid fuckwits think what happens when we double it.

Even the Minister for Indigenous Affairs doesn’t know what The Voice actually is, or how it works, or whether it will replace Parliament, or sit above the High Court, or just be a meaningless waste of our money pandering to the “Australians are all racist” bandwagon. It matters for lots of reasons to everyone.

Starting with the lie, from Albo that Shaq “reached out to him because he wanted to know more about what the debate was about”. Yep, that happened. Sure he did.

Next Albo’s minders and agenda setters will start pushing out more Indigenous footy stars and celebrities to gain public support for The Voice.

Yet another example of how stupid this PR stunt was, here’s a funny snippet of Shaq which clearly the media never asked about:

According to the Los Angeles Times, O’Neal did not believe he was being racist when he said, “Tell Yao Ming, ‘Ching-chong-yang-wah-ah-soh,’” but the remarks came under immense public scrutiny. He issued a public apology

I attended an Aboriginal Engagement workshop today. To say is was eye-opening is an understatement.

The expectations set forth are mind boggling. There is an issue of unemployment, yes, but to overcome it the industry is expected not only to provide jobs, but to guide the applicants through the process, because, and I quote: “if the applicants are expected to fill out a form, it becomes too hard, and they give up”. Then we discussed culture, and I quote: “men business and women business are separate, sorry girls (we had about 50% split in worksop participants), the blacks don’t care, there is no equality”. And then was the revelation that the cultural norms are known to the aboriginals, but are not written, as these are an implied thing, but whites are not allowed to learn these.

What the actual F? How does an industry deal with “cultural principles” if they are deliberately held secret? Where is the incentive to provide opportunities if a mere task of filling out a form is too hard? How does the industry react to a culture that relies on a spoken word that can easily be changed to fit a narrative?

What the actual F? How does an industry deal with “cultural principles” if they are deliberately held secret? Where is the incentive to provide opportunities if a mere task of filling out a form is too hard? How does the industry react to a culture that relies on a spoken word that can easily be changed to fit a narrative?

Peachy, I get quotas. Have been exposed to a similar thing in the USA – affirmative action, minority/women owned businesses, etc. But the owners of those businesses, and the individuals who were gaming the system still had to hustle. Show initiative in order to achieve.

But in our system, or the system that is being promoted to the industry, it is industry’s responsibility to take on the initiative on the behalf of aboriginals who say they want a job but are not willing to step out of the comfort zone to fill out a form. As an employer, is this what one would want to see from a potential employee?

I don’t even know what the Shaq thing is. Can’t be fucked even googling it.

A few weeks back I was listening to a podcast about the worst video games ever made. Shaq Fu was one of those games mentioned, and they talked about how when they pitched the concept to Shaq, he got quite excited and wanted to get more involved.

The result was a terrible fighting game that basically destroyed the reputation of the developers who went bust a few years later. Therefore, having Shaq invite himself onto this Indigenous Voice thing? Bound to fail. I’ll give it 18 months as per the usual embee predictions.