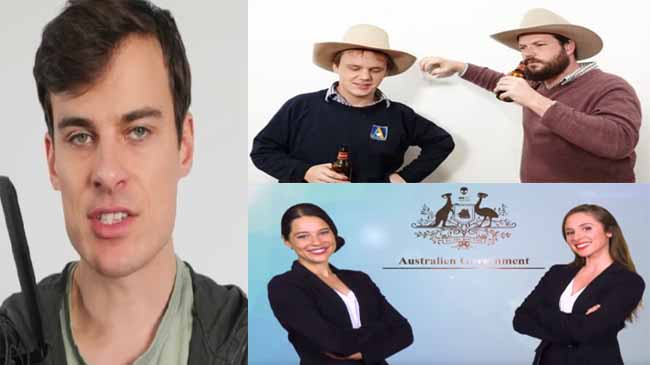 A swathe of left-wing Aussie ‘satirists’ have announced their immediate retirement, just days after Anthony Albanese was elected Prime Minister.

Friendlyjordies, The Betoota Advocate, The Chaser and The Juice Media have all announced they’re calling it quits just days after their beloved team red was elected.

“We got great mileage out of using the same ‘ScottyFromMarketing” joke for the last 3 years but now that party is over. Our target audience of inner city, progressive midwit dickheads aren’t interested anymore,” Betoota’s Errol Parker said.

The Chaser echoed their sentiments and cited some de ja vu.

‘It’s been a long nine years of ALP cheerleading, but we haven’t been funny since 2007 when essentially the same thing happened. The ALP got into office and we became irrelevant fast, you’d think we would have learned. We only hope people have forgotten about the mid-2010’s reboot because women aren’t funny,” Charles Firth said.

Melbourne’s the Juice Medi disputed claims of partisan bias but would be hanging it up anyway.

‘Using the exact same formula of progressive snark and sarcasm that goes for far too long with some censored swearing added in because we’re such edgy cunts, has gotten us this far. People are sick of that Honest Government Ad shit which I admit has never actually been funny outside of Collingwood and Northcote or if your IQ is north of 100,” founder Giordani Nanni said.

“I’ve asked the girls if they wanted to continue and actually get their tits out in each video because it’s the only way we would retain viewership, but they’ve said they’d make more money doing Only Fans.”

Friendlyjordies has yet to make a full announcement, but later said he may consider increasing his filler content of inane, 45-minute takedowns of Vice journalists and low-hanging cultural fruit of MAFS mockery to keep his lifestyle funded by the Youtube algorithm after realising ‘I have no actual skills.’

Don’t worry if Peter Dutton becomes Opposition Leader they will have plenty of material to work with.

Humor is subjective and all that, but they could have had an absolute field day with the ALP/Greens the last few years and they haven’t. Lidia Thorpe, Maureen Faruqi, Keneally, trannies, etc. Nope, won’t touch it.

They want to be politically partisan then fine, but you need to actually be funny as well. Progressive snark isn’t funny and that’s all most of them sell imo.

Honestly – it Mr Potato head had rolled Scomo in February imho the Coalition would still be in power today.

Scomo was that fucking toxic he single handedly lost the entire election.

Yep. It was the election to lose as they say.

Labor will fuck everything so badly in 3 years, Australians will install anyone but Labor.

Labor have turned back a boat, with Marles adding something like…”making sure they didn’t have any claim to asylum”….

Not a single question by MSM about what this idiot just said.

The next boat will be full of people with asylum credentials and it’s all over.

Guarantee a boat arrives before the end of next month, then a few every week for 3 years.

Labor are going to be the cluster fuck everyone feared, and more.

I don’t give a fuck about the small numbers that come on a leaky boat every month. It’s all a distraction from the huge number that comes on a plane… Crush loading cities and putting more stress on already failing infrastructure. Greenies/Left wingers will say you need to bring them in and then build it. Meanwhile everyone else suffers a declining quality of life.

Last edited 1 month ago by DictatorDavid
3

I understand they’re a fraction of the numbers, but it is still a major concern.

It is disorderly, it displaces genuine refugees on the list/program. A genuine refugee can’t afford anything like $8k. Are they going to settle in Kooyong?

It has turned Labor into a woke party, workers reject. i.e. It’s changed the support base of Labor, from workers and environment to woke. It has made discussion about population impossible.

Nothing good comes from it. It is at the core of everything that’s gone wrong for Australia.

A genuine refugee wouldn’t be coming to australia full stop. they would be seeking refuge at the first available country that was suitable, so unless they are coming from NZ or papua how is that australia?
Anyone filling out the paperwork and waiting 6 months or more for approval is clearly no more a refugee than someone coming by boat.

My understanding of it, is they are in protection where they are (most often close to where they lived), and have applied to Australia (and probably other places too) for asylum.

It was day 1, Labor made this huge mistake, so I cringe with what’s coming, across all policy.

It’s hard to forget 12 of Rudd’s fucking idiots are still there. It’s frightening.

A fly in your ointment
Reply to  bjw678

A genuine refugee wouldn’t be coming to australia full stop.

So what is the bar for being a refugee? The weather’s a bit bad where you live and you’d like to live somewhere else?
People choosing to come to australia are economic migrants not refugees. People having their homes blown up in ukraine and fleeing for their lives are genuine refugees and have neither the 8k for people smugglers or their sights set on australia.
But I’m quite happy to hear some sort of actual contradictory argument beyond “it begs sarcasm”…

I think that the highest ever number coming by boat was only around 10-20,000 maximum. I seem to recall the average was somewhere around 8000. Compare that with people coming in via plane which was somewhere around 350k a year pre-covid if I’m not mistaken… and that doesn’t take into account the massive influx of international students (who get PR) either.

Pointing at boat people is just a distraction from the real issue. I hadn’t heard about boats coming since pre-covid but on election day they were banging on about a single boat they turned back. Funny that coincidence..

Yes, this is true. The boat thing is a sideshow which happens to be dramatic (on the high seas, and all that).

Service NSW already has some of that functionality

What’s the probability that the locals deliver a loud “fuck off” the the Westernfuhrer’s “digital identity attempt?

I hope so but a lot of people in WA love this shit. They see absolutely no danger from it whatsoever.

NSW has a heap of it already. Until it is made compulsory I see no problem.

Well, I guess that there are at least 2 different rollout models:

Maybe they are, but even so you are trying to shut the barn door after the horse has bolted, gotten lost and starved to death.
All this will be is a digitized version of official ID that you already have to carry and is already computerised on the back end. eg drivwers licence, mediscare card etc.

optiion 2 also offers a peer pressure… you know the type that is law abiding citizenry and will take whatever they’re told.

Spot on. None of these people are funny. You can add ABC-era Shawn Micallef and Charlie Piclering to that list. The pendulum will swing back like it has with the Babylon Bee in the US though.

It took all of 4 days for DLS to realise that the democracy he so supposedly believes we live in has simply returned us to the status quo of the pre-Trump era.

Did DLS really think it was going to be any different with Australia’s mini-me version of Biden?

“In short, why are we offering the least important concession for a relationship reboot that has only one goal in mind from Beijing’s point of view? To make it easier to execute the Pacific Axis and the 14 conditions.

Moreover, that is what Albo just signaled to Beijing that Australia is happy with. Restore the bribe and you can take what you want!”

Honestly it is all so tiresome. When Democrats stole the last election I said, “You watch, within 4 years Russia will once again be the enemy and China will be our friend. We have always been at war with Eurasia.”

And here we are, not yet at the mid-terms and the media are already softening up the public for the inevitable repoint back to China:

“But rather than try to court China…U.S. President Joe Biden is in East Asia meeting with allies to send Beijing a message about U.S. leadership and renewed engagement in the region”

Where is the Biden Boom that was going to result from taxing corporates, forgiving student debt and all the policies that limp wristed soy-boys were cheering on in their over active imagination?

What did we get? War with Russia, enormous corporate largess and enormous Govt spending accompanied with renewed mass migration to ensure real wages keep getting crushed and the Govt spending doesn’t spill over into real wage inflation.

Whose world view was more accurate when Biden was elected?

Likewise with LAB – we’ll be back in China’s pocket before the next election, there will be a huge distraction with Labor pursuing the Uluru statement and the bullshit creation of an anti-democratic ‘Indigenous 3rd Chamber’.

The great reformation of Australian politics under Labor will be nothing more than a divisive exercise in identity politics, and is unlikely to accomplish anything beyond a federal ICAC (and honestly I have my doubts that it will even accomplish that).

Of course DLS will do his usual pivot, but he’ll never spend a moment considering why my prediction was more accurate than his – because it will mean my model, based around hostile elites and the pantomime of democracy, is a closer representation of the world and the ‘truth’ than his model based around post-modern democracy and the so called rational enlightenment.

Last edited 1 month ago by Stewie
2

saw your twatter riposte.
waiting for the blocking from dls now.

Won’t be long jelmech. The only reason it hasn’t occurred already is because their twatter account has even less interactions than their comments section… I doubt they even monitor any activity their twats generate.

True though, what I said here:

“You watch, within 4 years Russia will once again be the enemy and China will be our friend. We have always been at war with Eurasia.”

Sadly, it will be exactly the same with Albo and Labor:

“The great reformation of Australian politics under Labor will be nothing more than a divisive exercise in identity politics, and is unlikely to accomplish anything beyond a federal ICAC (and honestly I have my doubts that it will even accomplish that).”

DLS has no response for it, because it means his model sucks and mine is closer to reality.

Nah, he will double down. I mean his model is perfectly correct in the exact wrong way. Everything he predicts, the exact opposite happens.

I do agree with you that Albo is a Biden mini me. I am expecting wokeness on steroids, China to be besties and token climate change stuff be year end.