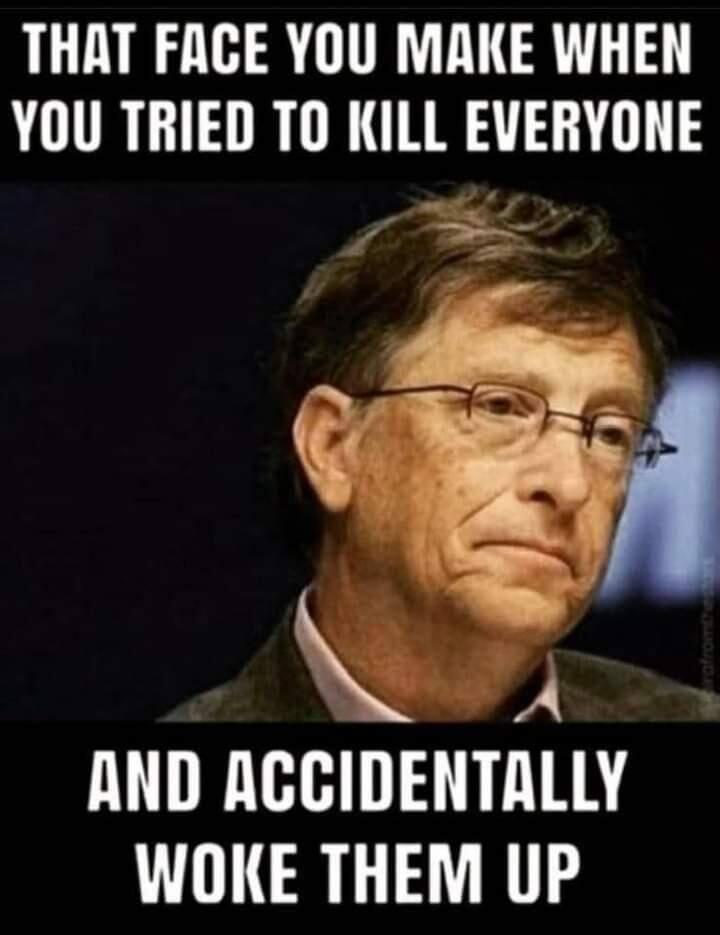 Good news all around. Globo Homo is getting crushed. Why? Did they not just win the election down under.

Well yes, and you can assume Globo Homo will do everything it can to screw us, but the good news is they are falling apart. How do we know this?

First, lets have a look at Klaus Schwab, and what he had to say at the WEF.

Interesting, here is the money quote, “We have the means to improve the state of the world, but two conditions are necessary: The first one, is that we act all as stakeholders of larger communities, so that we serve not only our self-interests but we serve the community. That’s what we call ‘stakeholder responsibility.”

That is quite a statement. He is calling for unity in the face of ever growing disaster. Excellent.

But Why Is He Calling For Unity?

The long and short is, ‘The West’ has just lost the war against Russia in a comprehensive fashion. Their Ukrainian proxies are getting killed on the battlefield. Apparently the Uki’s are losing 500-800 men per day in Donbass, and from the narrative shift, the entire battle is about to be lost as the Donbass line starts to crumble.

Which the folks at Davos know well, and are busy preparing the populations of the West for hunger and soaring inflation.

So, when you’re gas bills rise, and food becomes scarce, remember the ‘incredible transition’. Your living standards will fall massively over the next year.

And Is It Working?

Lol. Hungary just declared a state of emergency. Probably because Poland and the west of Ukraine (Galicia and Lvov basically) are going to become part of the same country.

European unity and NATO are crumbling, and we may well see Hungary and Poland go to war in the next few weeks. Link: Hungary’s pro-Putin leader Viktor Orban announces new State of Emergency due to Ukraine concerns | Daily Mail Online – this happened a few hours ago.

As this plays out, dollar ruble is at 55 and rising, and the gossip is the Russians are selling ruble to stop the speed at which Ruble is appreciating. Chart inverted in context.

Lol. All this practically means, ‘The West’ has also lost the information war, especially to everyone not involved.

Trifecta – globo homo is losing the military, economic and information wars. Yes – I find this funny.

And as far as the sanctimonious elites of Europe are concerned, I am very happy to see them burn. This is going to be very very amusing.

In case anyone is still wondering why, this crazy American was appointed by the Minister of Communications, Paul Fletcher, who is a liberal by the way.

Ex Twitter and Microsoft, safety policy team. So you know she hates anyone not part of the leftist hive mind.

it will be sobering and eye-opening for many still under the propaganda trance when russian forces inevitably squash the ukrainian army in the donbass and reach the dnieper river, which i think may take another two months or so. so many are still under the globohomo spell that ukraine is about to kick them out of the country despite the reality that the UKR armies are being encircled at an increasingly rapid pace. my only hope is that those brave ukrainian men surrender to the russians where they will inevitably be treated with dignity and respect (as they deserve) as opposed to throwing their lives away as cannon fodder for globohomo and nato.

Dignity and respect from the Russians? Good luck with that

Whoa jeez….Julie Inman Grant has Sanpaku Eyes. She looks like a dangerous nutter.

bollocks.
look at these titles of the last 2 days from fakenews dotcomau 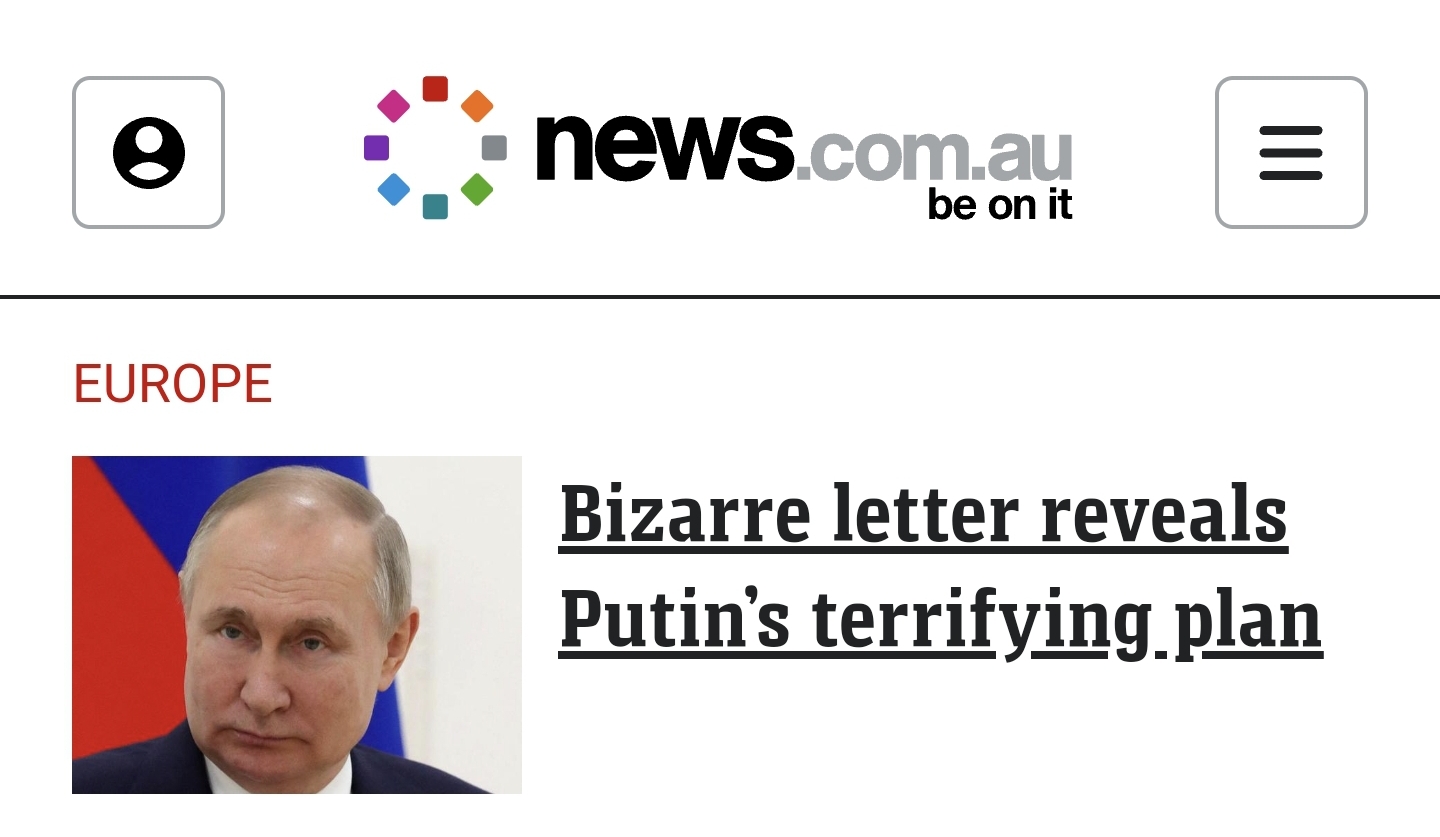 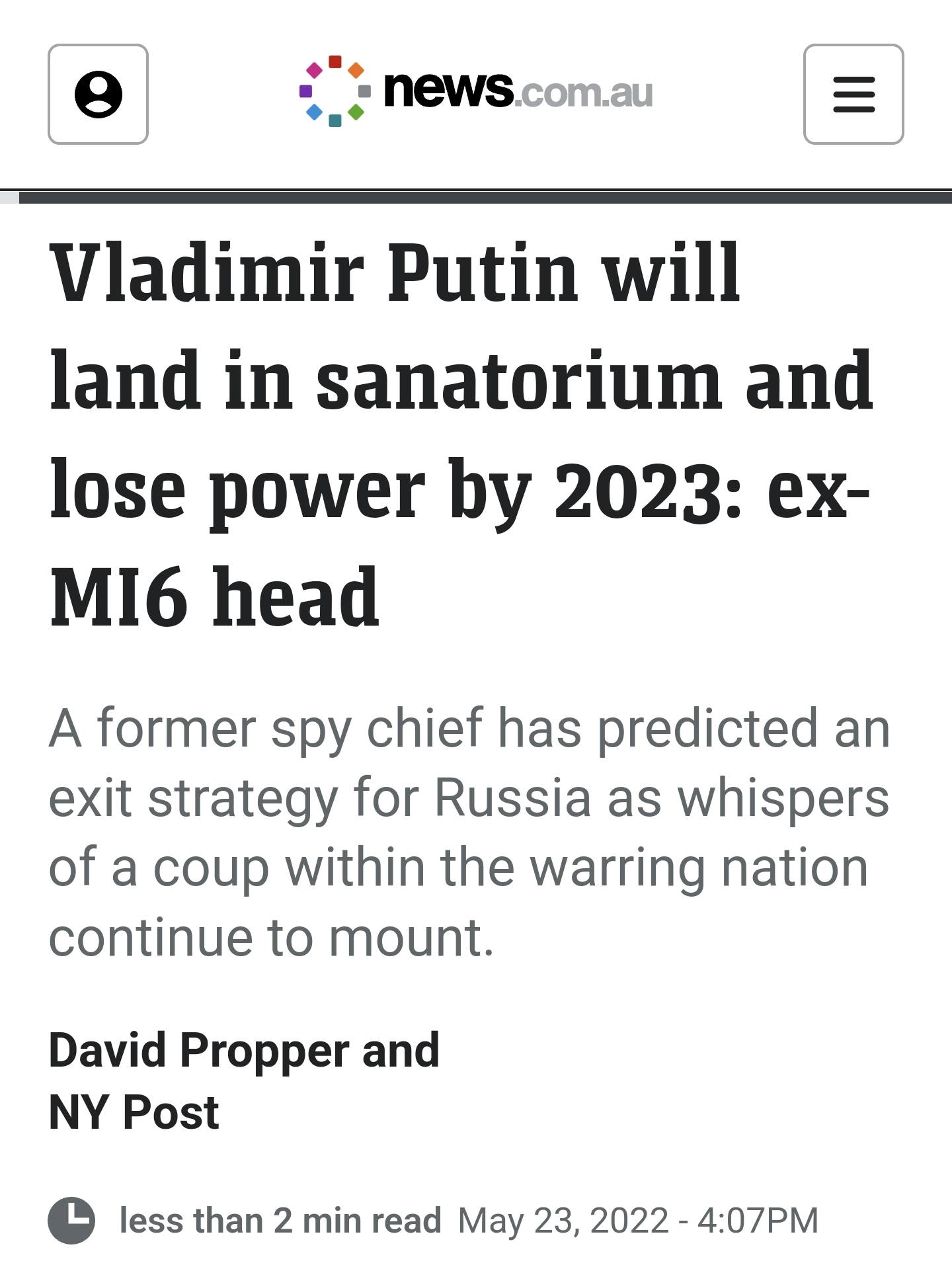 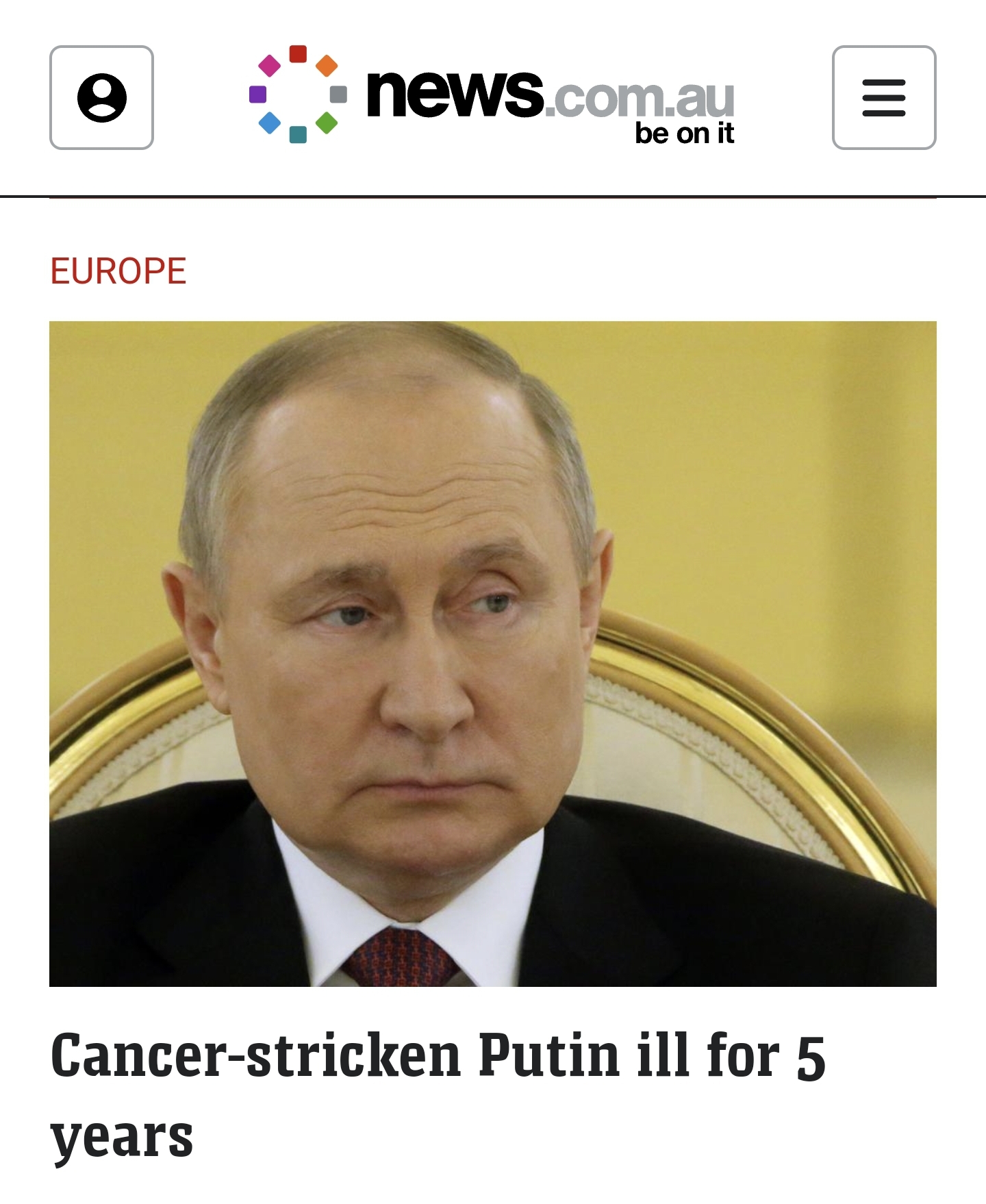 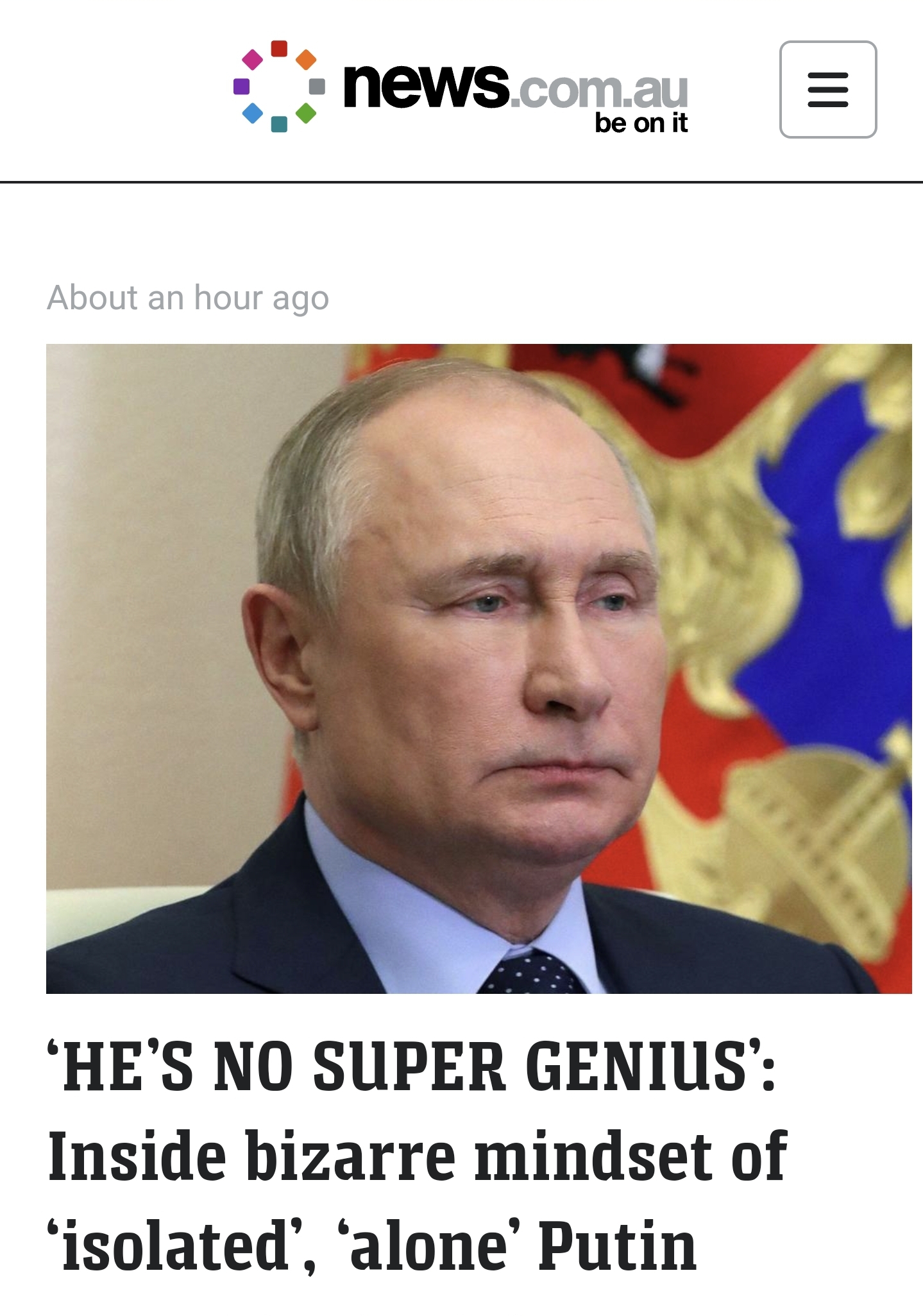 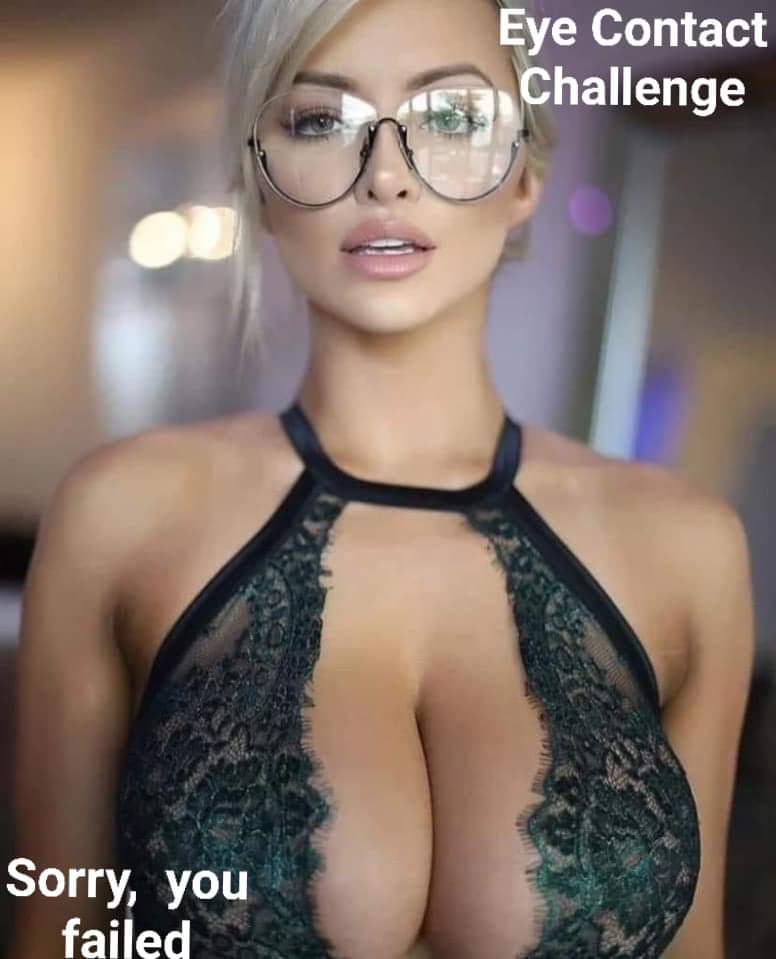 I demand a re-test!

I am failing this test repeatedly.

you forgot that in newsmaiking the image is “purely for illustrative purposes”. Includes places like Bucha, Rachak, Markale, Alepo to name a few.

T
Author
Reply to  A fly in your ointment

My argument is not that news.com.au are smart journos. Let’s be honest monkeys throwing poo are smarter and more coordinated.

Have a look at what Kissinger said at Davos yesterday. Sure he is a murderer, but he’s a pretty smart one.

nah, Ruskies are losing on every front and Ukros are weeks if not days grom victory. 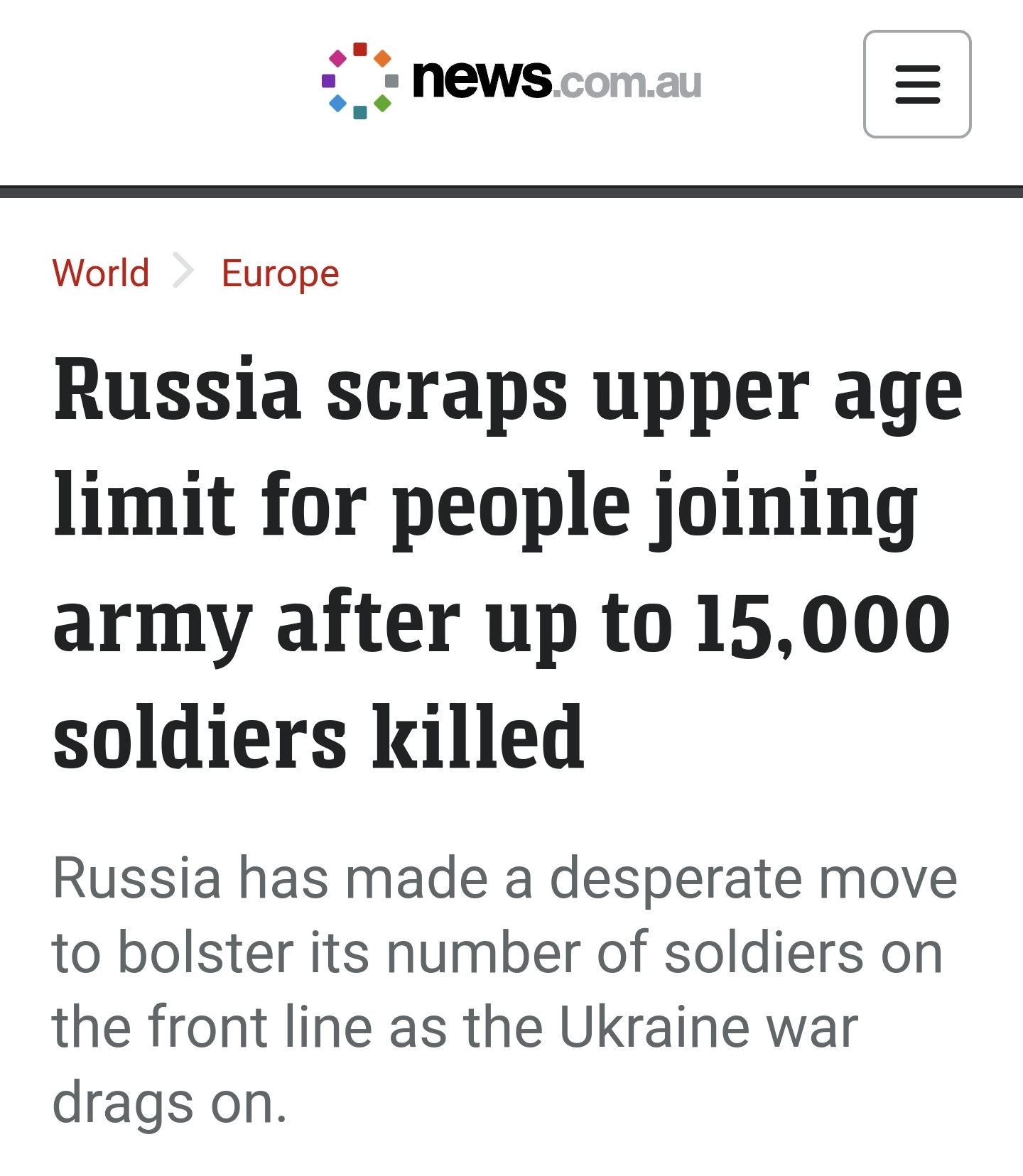 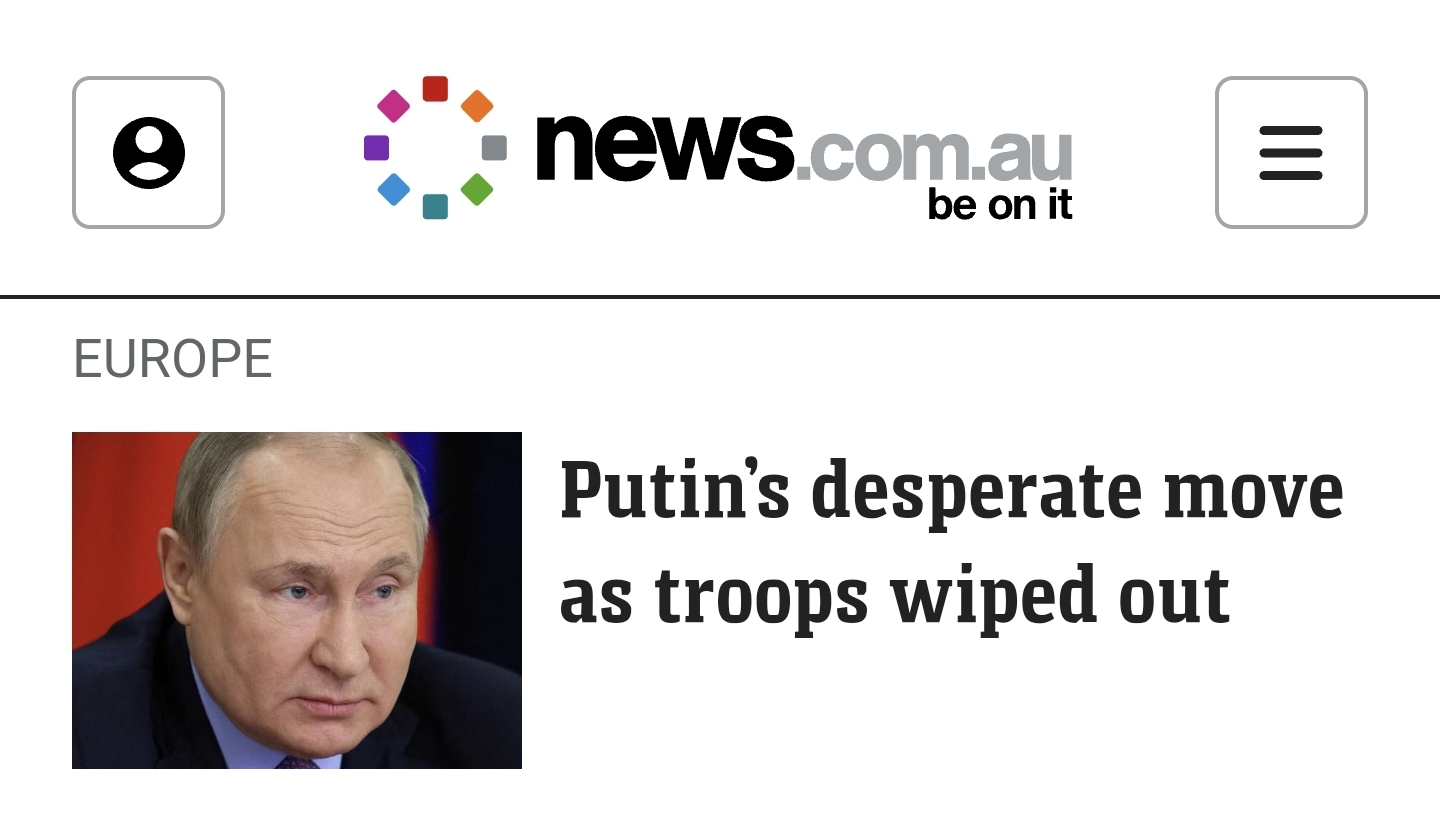 pity the individuals sacrificed on the altar of putins paranoia, though.

No1
Reply to  Peachy

It would probably take a full-blown NATO intervention e.g., WW3 to cause Russia to lose at this point.

The trained Ukrainian Army is long gone, now it’s just a bunch of reservists who are crumbling. It’s over.

A fly in your ointment
Reply to  No1

There are no means for Russia not to win this war.
the stakes are so high the only possible acceptable outcome is a win. it seems to me their objective is to win the war outside the military ways and so far they seem to succeed

my biggest regret is that Ukrainians fell into the trap which worked well in breakup of Yugoslavia.
I may be seen here that I support one side, actually I regret every life lost by Ukrainians equally the same. The hatred is a recent painting and the paint is barely dry, underneath the paint, these people see each other as sisters and brothers.

No1
Reply to  A fly in your ointment

I agree, this is a fake war, ever since the coup in 2014 Ukraine has been dominated by a minority of Ukrainian ultranationalists and US puppets, and unfortunately Zelenskyy is the ultimate US puppet. Despite the fact that he was elected on the exact opposite platform to what he now follows. But that’s nothing new to any of us here.

The policies that Ukraine has pursued since 2014 make no sense at all for a country with a 40% Russian-speaking population, which used to be effectively a part of Russia. Realist thinkers like Mearsheimer and Kissinger have said for years what the outcome would be and now it has eventuated. Fact is, just like the pandemic, Ukraine was just a tool to make money for interested corporations. It’s just sad that enough people were naive enough to let it happen.

Probably because Poland and the west of Ukraine (Galicia and Lvov basically) are going to become part of the same country.

That window closes by minute and it was very limited to begin with.
Should Poland invade Ukraina, it is unlieklly any NATO country will participate directly, more likely it will be a stand alone action or at best a proxy invasion. Now it is one thing bombing helpless countries like Iraq, Yugoslavia, Syria, Afghans, Libya and shirtfronting one of the most powerful military force in their front yard green patch.
For comparison, bombing the Yugoslavia turned from a failure to a success (not a victory) only after Romania and Bulgaria allowed NATO planes to fly over their turf. And that was only to fly-out. Up to that moment, the “butchers” downed the invisible F117 and a score of A10’s, grounded estimated up to 100 planes (i.e. hull and structure compromised from bullets). In return for the services rendered, both Rom and Bul were pronto admitted to EU.
Applied to western Ukraina, concerned Belarus could intervene and “allow” Ruskies to back them up effectively controling the skies from 2/3 of the attach angles. Should they invade, I can see those polish soldiers becoming charred by the US style scorched earth onslaught.
This is the main difference, fighting somewhere else overseas is not the same as in your own yard or next door. \

Another factor, Lvov is claimed by Hun-gars too, remanants of the Austria-Hungary empire wet dreams… should Polish invade, Hungars may decide they want their piece of the cake and may confront the Poles. It will be an interesting but bloody game to see who’s fingers will be burnt by touching the western Uke. SH 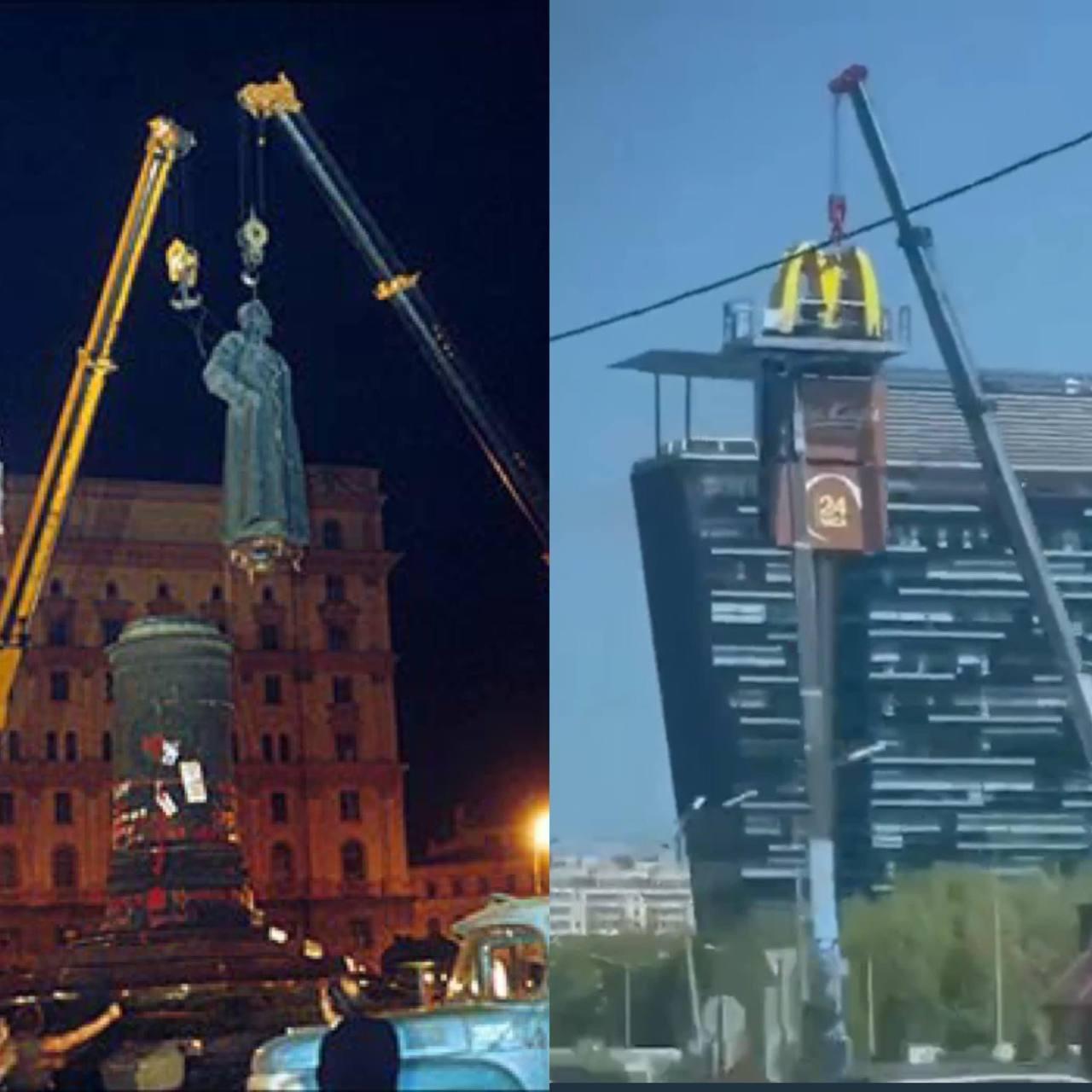 Last edited 6 months ago by T
1

I don’t believe it is falling apart whilst the elite are 100% behind this. WEF is sponsored by the 1000 biggest companies and media are on board. Whilst there are plenty of YouTube clips about the evils of the WEF by both left leaning and right leaning, the MSM is posting glowing endorsements.

The EZFKA election proved that people will happily give up freedom for comfort and security. Digital ID, UBI, digital currency will all be welcomed here if it meant that house prices continue their march upwards.

I know the post is optimistic, but I don’t hold the view. The WEF knows this is frog boiling and the masses will go along with global communism as long as their life is comfortable.

I agree. I don’t think they’ll be successful but neither will we.

I find the whole thing pretty confusing – how could the powers-that-be be surprised that Russia is winning the war? Russia hasn’t lost a war since Putin came in. They couldn’t have failed to predict this level of inflation from the sanctions, which if they actually worked would probably cause even more inflation. However, they may be surprised that countries like India and South American nations have largely failed to ostricise Russia.

I agree that this whole thing has been an epic own-goal from any conventional perspective. But that must have been planned because the probability of this outcome was definitely at least 50%.

A fly in your ointment
Reply to  No1

in reality outside the anglo/US sphere the world is united in thinking that own interests should precede those of foreign powers and that the war in Ukraina is actually prepared, set and caused by the cry wolf.
Countries backing the Empire of Lies are only a handful outside usual sycophants circles. literally, the world did nit stop trading with Ruskies, they just went ways not to be seen disobeying the bully’s demands.

in my view the Empire of Lies was stunned by the developments in Uke as they went full hysteria and cranked their “information” campaign on 12 on all levels and all planes. Tjey literally have no further means to crank this side of warefare short of direct participation. They were also stunned that there was no reaction from Ruskies on the media side and that all the usual Bellingcat/Whitehelmets methods produced SFA as it got to be debunked within hours if not minutes. I believe Ruskies are focusing their media towards Ukraina as they prepare the citizenry for the “Slava Ukraini vo Rosiyskoi Ferderatsiyi”. They want to win the Ukrainian hearts and given that pre putsch times there was a substantial feeling of unity, they have a chance to succeed.
In simple, Ruskies do it care what goes on outside Ukraina. An they can.

Gozalo Lira hints that the warfare us yet to escalate in another fashion totally unknown to the Empire of Lies.

The WW3 is in full swing, it is just not televised.
﻿