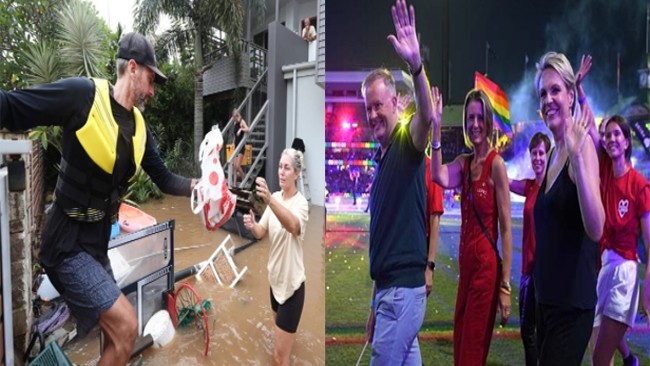 A Lismore man who lost his house and business in the NSW floods, has thanked opposition leader Anthony Albanese for sending well wishes from the Mardi Gras in Sydney.

John Sattler, from Lismore, lost his property and agriculture business after flooding destroyed everything. However, he said he really was given hope when Albo turned up at the Mardi Gras and sent thoughts and prayers.

“It’s great to see our future PM stand up for what matters in the greatest floods since 1974,” John said.

“Supporting the moral decay of Australia by attending a public degeneracy parade when flooding has wrecked two states and millions of lives, really gives me a positive glimpse into the future of an Albanese government.”

Albanese said he will be scheduling more photo ops in the coming weeks and vowed ‘if Scomo doesn’t hold a shovel then I sure as hell won’t be getting my boots muddy.’

“We’ve perfected the art of doing nothing in opposition for so long, so don’t expect that to change.”

People who take their kids to the festival of buttsex should get the rope.

This is basically a preview of Albo – wholeness on steroids.

Albo sent him thoughts and prayers. I guess it is better than getting a tirade from Adam Bandt about how climate change caused this and how working class like John needs to subsidise Teslas.

The foundation of gay culture is the right for men to suck penises and put them in other men’s anuses, so the culture must be defended, protected, promoted in a positive light at all times otherwise the whole movement falls apart at the seams when the foundation is so weak to begin with.

Most cultures are based on securing food, land, defending territory, procreation.

Gay culture is about the right to suck another mans penis.

John Sattler? one of the tenterfield Sattlers presumably?

I wanted to patent “the method and vessel to freight thoughts and prayers from various physical or legal entities to other various physical or legal entities” as well as “container for conveyance of emotions across space and time” for optional extras but I got stuck at the invention phase about 32 years ago. Perhaps I should return to finish inventions as the post truth phase of Westworld is in the full swing.

Not only that but if you display a preference for whose arse you want to fuck it’s racism. I guess if I was on a dating app and said I only wanted to meet women the gay brigade would be crying homophobia.

You shouldn’t read the abc. It’s too depressing.

In spite of WW3 on the horizon, that crap is worthy of an article. FMD those arse fuckers are going to suffer when the shit really hits the fan, I say bring on the CCP and Putin and let’s get some lead into the woke.

Could someone explain to me why the ruble is falling ?

sure the us and Europe might not import its oil , but oil can just go elsewhere like when China said it won’t import our iron ore

should we be taking a big bet on the ruble

Because panic.
Eventually it will consolidate but some losses will not regain. Smart money already sold everything denominated in Ruble, ready to buy the dip again. Silly me, I thought stock exchange was a mean to grow businesses, seems to me it is no different than a pig farm

Yes, I think there is opportunity in the ruble. Note also that it’s yielding 20%….

now, what exactly to buy?

Some sort of synthetic contract ? CFD?

I don’t know I’m not a finance guy
aren’t you the expertSome sort of synthetic contract ? CFD?

how does one go about that

Last edited 10 months ago by Coming
0

We need Freddy to help us.

I was also thinking some bonds. Short to medium term (6mo – 3yr), although subject to seeing how the pricing looks out across the yield curve

however, sanctions might mean that if you try to buy bonds, you can’t and you go on a list. Which means that you’d need some kind of derivative or indirect exposure.

Last edited 10 months ago by Peachy
0

I warn you though that the Ruble and Russian Stockmarket starting to price in a default. i.e. That Russia will default on all their bonds, either nationalise their entire stock market or tell all foreign owners to GAGF.

As some commentators have been saying for a while, this is the time to be concerned about “return of capital” rather than “return on capital”.

Last edited 10 months ago by Freddy
1

“pricing in a default”

isn’t that the time to buy

This is not a Greece-like scenario where all the vultures were buying up Greek assets at a bargain price. This is USA and allies trying to destroy Russia financially. Help can only come from Russia’s allies.

But in the west, assets are never “nationalised”

How can we get ahead of that trade?

A lot of the trades are already done. Look at the price of wheat for instance. Go and stock up on your imported wheat products like Italian Pasta before they disappear off the shelves toilet paper style.

I am expecting food prices to skyrocket. EZFKA capable of producing it’s own food but we know the cunts will send it all overseas to maximise profits. If this happens it probably means rates will stay the same or possibly even fall rather than rise. This goes back to my theory that genuine inflation comes from rising wages (increasing disposable income). High food prices means less disposable income available to service debt and we can’t have that in EZFKA.

I have a running thought that the famous MB crash predicted for Australia could actually for once be coming.

If the fed reserve jacks up rates 4-5x this year, and the RBA does nothing, that will tank the AUD surely to $0.60 or less, actually driving further inflation, which will force rates up afterwards anyway. If rates go up too much you pop the housing bubble.

If the RBA increases rates and tries to keep up with the Fed, let’s say a cash rate of even 1% (?), you risk popping the housing bubble.

If the fed reserve jacks up rates 4-5x this year

It’s also far from a certainty that this is true either as the sorts of rate increases I think you are talking about will take a lot more than 20% off the housing market and I don’t think the RBA has the ticker to do that intentionally.

nd the RBA does nothing, that will tank the AUD surely to $0.60 or less,

This also seems far more certain in the offshore funding world when rate of return on foreign money was a significant driver of exchange rates but in a world where the RBA just prints loans into existence internally does this still hold? I don’t know but it doesn’t seem a certainty.

If the US offers 1%+ on cash and we offer basically 0% what happens then though?

I agree if everyone is paying 0% your last point is correct but if we’re back to normalised interest rates, well at least anything above zero, aren’t we back to the good old days where respective interest rate differences matter?

If the RBA does nothing basically this year and the Fed does how can the $AUD not crash making inflation, then forcing them to jack rates?

if commodity and grain prices stay this high , Australia’s current account surplus is going to be huge

Should be interesting to see how it plays out, and to what extent these opposing forces will play on the AUD and inflation here

We won’t get sustained price inflation without wage rises. Unions are no longer going to cause chaos demanding wages rise to counter prices rises. In EZFKA we now do the opposite and kick workers in the nuts by opening up the immigration floodgates.

I expect house prices to fall modestly. RBA would shit itself with anything more than modest. Commodity prices are supporting the AUD which takes some pressure off the RBA.

I have no data but my take is wages are barely keeping up for now but once the immigration gates are re opened in a few months this won’t hold and if inflation keeps up I don’t know how much wages will follow.

Agreed workers are kicked in the guts especially once this happens.

Also isn’t most of the inflation we have as a result of supply side shocks that keep on going? There isn’t a massive increase in spending power now driving it.

The RBA will look through inflation till it smacks them between the eyeballs, then they will blame anything else, and still do their best to keep house prices going up, at the end of the day house prices will never be allowed to crash while there is still a BB alive to hear it happen.

expect public private partnerships* in the initial stages of the new corporate residential landlord sector.
*to be spun out to mates later on

So something in the water or culture? 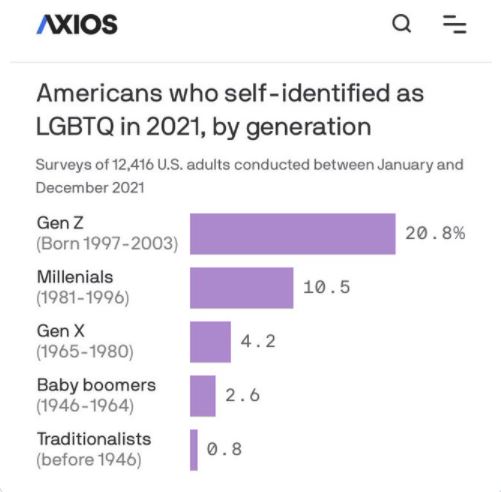 So the cycle goes on, you know where in the cycle we are now, staring down the barrel of hard times.

True, but it appears to be consistent with other data:

To make a blunt example a survey of 12,000,000 australian males would indicate no one was a lesbian…or a woman.

Since the data for these things is now available to most such that you can’t juke the stats anymore, they mess with either the questions or the sample as you attest to above.

They could easily have just asked those that look like they are “alphabet” the question in the survey, I am sure that if you asked the same question of 12000 people in a texan midwest town you would get a very different result.

A failing culture in its last days.

Hard times ahead, not entirely a bad thing.