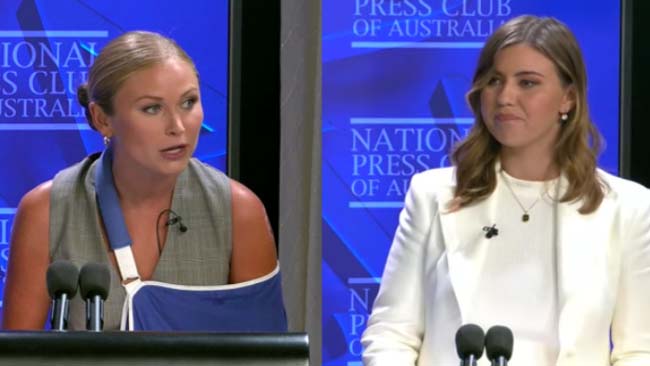 A new study undertaken has found that the EZFKA public don’t give a fuck about Grace Tame and Brittany Higgins, aside from a few journos on Twitter.

The research, conducted by the Who Gives A Fuck Institute, clearly showed that most of the EZFKA public couldn’t give a shit and that the National Press Club stunt was overwhelmingly deemed a ‘self-aggrandizing wank.’

‘The evidence certainly shows that while the country is imploding, no-one cares about this dog and pony show. It’s really just the usual bunch of mediocre, centre-left blue checkmarks trying to make it about themselves,” Dr Mark Gregson said.

“We also found that no-one, especially the ALP, wants to talk about the male staffers fired for wanking on a desk of a female MP, because they were a protected species (gay) and an actual act of misogyny by a group that actually hates women isn’t convenient. Tanya Plibersek or Katy Gallagher wouldn’t have any of that.”

The National Press Club Luncheon was temporarily interrupted by a male in a straight jacket screaming “Rape! Sleaze!” who had to be escorted out, and was later identified as David Llewyn-Smith.

“I’ve just watched the Grace Tame, Brittany Higgins double team at the press club and I don’t really know what to say. These two are extraordinary. The personal power, merciless truth and integrity is beyond my words to express.”

LOL. DLS needs to lay off the infotainment gadgets. What do they say? Garbage in, garbage out.

No-one gives a stuff about these two. Big Brit is going to (kangaroo) court and we’ll see what the defence has to say in court. We’ll find out how pissed she was, I’m sure CCTV will tell us if she was voluntarily in Parliament, whether she was lucid enough to pass through heavy security at 2am with a man who wasn’t her boyfriend, whether she got naked herself (she’s a big girl would be somewhat difficult to completely remove the clothes from a passed out body on a couch)

Autistic Grace seems to have allowed herself to be manipulated through her life, first the creep teacher when she was 15 years old, now creeps like Lisa Wilkinson, Labor, the Greens, etc. Still a 15 year old should know better wouldn’t almost all teenage girls be utterly repulsed and making fun of him with her friends? 15 used to be the age many started full time work.

At some point she has to get over it and move on in life instead of indulging in victimhood.

I think they’re both in it for the attention. Autistic Grace is an artist, married an actor in the US, been on the covers of glossy magazines dolled up. Now going after the PM, scowling at him in a photoshoot. She’s loving the attention.

Not sure Big Brit wants the attention as much as to save her career by crying rape otherwise she’s would have been known in Canberra as that heavyset staffer who got pissed and woke up stark naked in Parliament, which is bad for your career when you’re one of those ultra ambitious types like Brit seems to be.

tame is the absolute worst

definitely trying to endear himself to some prog cultists. that’s like next level simping.

Strong independent victims are moral robots with a holiday on moral agency in the current year society. Women can drink as much as they want and not be responsible for any outcomes whatsoever. Which is ironic because power without commensurate responsibility is corruption.

Much more concerned about the allegation Grace Tame made regarding receiving a threatening phone call and being warned not to embarrass the PM in public.

If true, this perfectly demonstrates our decline towards a Kafkian state, a la North Korea.

Not excusing that allegation of state intimidation but that largely sounds like bullshit and/or embellishment from Tame to me.

My 2 cents is that her and Higgins behaviour takes away from other abuse and rape survivors who we never hear about. It’s basically just a hate Scomo and the LNP platform now.

I find it hard to dismiss this as a one off or made up, as there have been other examples of Morrison’s office trying to silence dissent.

I hate to say it, but we are looking a lot like a Chinese authoritarian state.

Where have you been … LOL, you are 100% right though, Australia is not far from being a communist country where those in power dictate everything that we do.

I urge everyone to vote for anyone but the Lib/Lab/Greens at the election, it is the only way to send a message that the people are not happy, make sure you tell everyone you know to do the same.

Lol at that last paragraph. DLS really has become a frothing at the mouth stooge over this along with his merry band of simps looking for their pat on the head like trained dogs in the comments.

This. The simping from middle aged progressive ‘men’ in that comments section is absolute cringe.

Funniest of them all is that unhinged Dennis bloke. Wants 50k refugees a year – what countries do they come from Dennis and how do they treat women there?

Yep I thought dennis left after he spat the dummy a while back. But he must of been lurking and using multis. I’m pretty sure he was behind the Anders Anderson account as I knew the writing looked familiar. The funny thing is dennis thinks he is smart.

Dennis is deranged, a CCP astroturfer, or both.

i totally rattled the pearl clutchers of reddit by suggesting that tame came across as manipulative and had potential features of borderline perrsonality disorder, downvotes now at -50 lol

“imo tame could have borderline personality disorder, which often causes its suffers to be extremely vindictive/manipulative and attention seeking. she mentioned self-harming various times in her speech, which is one of the diagnostic criteria for the disorder. interestingly she has been diagnosed with autism spectrum disorder which is often diagnostically confused with borderline, though typically in men rather than women. very possible she is co-morbid both or has borderline rather than autism. she comes across as a media-savvy manipulator to me.”

she comes across as way too savvy imo, the omg resilient abuse survivor angle is an act

well she sucked some fkwits in…. AOTY? for outing a pedocunt?

they really strike me as grifters

Tame is apparently a “visual artist.”

Guided by that nasty POS Wilkinson.

Speaking of research, does anyone find it odd that they’ve analysed all this data in Denmark, found that fatality rates from omicron are way lower than from influenza, but now we’re supposed to #distrustthescience and keep persisting with lockdowns etc?

This theory that covid is now too big to fail business is gaining traction.

Can you share a link to the analysis of the Danish data?

but yeh, this nominally-Covid stuff has clearly become an end in itself for many people. Which is pretty insane. Unlike what they have in the Nordic countries, it is exactly the wrong kind of socialism.

Australia is a testing ground for the WEF so no wonder they keep pushing forward.

Note the author is David Heinemeier Hansson (aka “DHH”) who’s well known in tech circles as the creator of the web framework Ruby on Rails.

I am hoping that the people will start to wake up more now that other countries are lifting restrictions and word is getting out. I feel that narrative is collapsing and we shall soon be slightly free.

From the twitter of Tame;
‘Scott conducting an investigation into who made the phone call is THE VERY SAME embedded structural silencing culture that drove the call in the first place and misses the point entirely’.

Hang on a second. If Tame received a ‘threatening’ phone call and she wants abusers to be held to account, action to be taken and accusations to be taken seriously, wouldn’t she be fine with this. Also wouldn’t she name who made the call as if it were a ‘threatening’ call across a phone service then that is potentially breaking a law.
Interesting to find out Tame is getting paid (quite well) to give speeches to corporate events.
Who is AOTY 2022 again?

Government investigations are just a smokescreen. They let governments say they’re doing something, and gives politicians an out to refuse to answer questions on the basis of an ongoing investigation. That lets the heat go out of an issue until people forget – there have been dozens of inquiries into housing affordability and aged care.

They also set the terms of reference, with the Rachelle Miller one being a good example:

The shortcomings outlined by Mr Gordon about the inquiry include that it can’t look at “any conduct which may amount to a criminal offence”.

With the Higgins inquiry, the AFP was even saying it could compromise their own investigation.

But should Tame name the organisation and individuals involved? I think the public would like to know, but she has probably received legal advice not to.

Lel right on cue. The utter simping cringe from DLS this morning:
.
“First, Grace Tame should be made a special minister of state in the incoming government with instructions to deploy her plan for a uniform national regime against child abuse and rape”

But he’s a radical centrist lmao.

WTF is a radical centrist? Sounds like someone who literally gets off on fence sitting.

From DLS this morning ;
‘First, Grace Tame should be made a special minister of state in the incoming government with instructions to deploy her plan for a uniform national regime against child abuse and rape. Such a federal campaign can help bring healing to both state and people post-COVID. Whether Brittany Higgins wants to join in this undertaking is not so clear but she should also be offered a senior role in overseeing the execution of the Jenkins Review in its entirety.
…
If not, then the Australian people should take matters into their own hands and raze Canberra to the ground.’

Make Grace Tame a minister. DLS has taken an extra strong dosage of his meds this morning.
And is DLS going to move his pudgy exoskeleton out of his comfortable chair to go to Canberra and help the Australian people to raze it to the ground? Of course he won’t, besides his wife won’t let him.

As someone accurately commented on another post DLS suffers SDS (Scomo Derangement Syndrome).

I have no issue with Tame being a stakeholder, but special minister makes no sense. If Labor wants to do something then they need to be accountable for it and face the voters if it works or fails. A special minister does not have that accountability.

National Press Club PR manager when asked how it went yesterday, “I thought it went off like a sack full of ally cats”

In fairness, their acronym is NPC, so its not entirely unexpected.