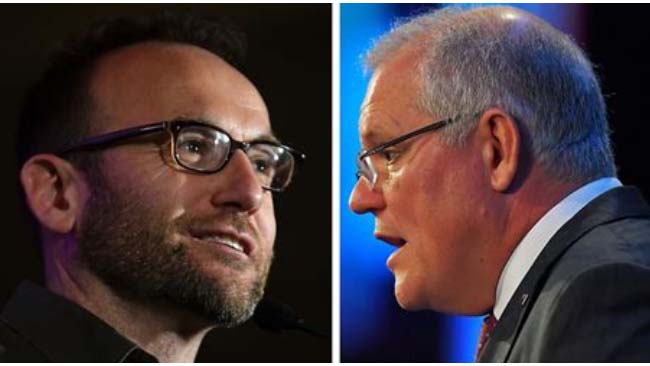 The two parties announced the merger at the climate conference in Glasgow this morning, right after the LNP and ALP merged last month. It is also believed “The New Liberals” will be joining the coalition after having indistinguishable policies.

Morrison said that his insane climate-zero policies is what won Bandt over.

“This is a historic moment in Australia politics and should make it clear that there was never any choice to begin with,” Morrison said.

“It’s great to see team blue, red, green and dark green combine to become some sort of greyish sludge that is typical of Canberra and most wastewater treatment plants.”

“We’ll get right to the business of economic suicide of a first world nation as soon as I return.”

Morrison and Bandt are both believed to be working on a ‘climate refugees’ policy, which will allow unlimited migration from China and India on the basis of climate change.

Nice one, had been toying with a similar idea for a piece.

The Greens are hypocrites. Case in point – Julian Burnside and his 20m property portfolio.

Do refugees live in any of them or does he advocate for them and expect them to live as far away as possible eg Dandenong?

Greens and Labor are in the way of political reform in Australia.

They both have to be wiped out for Australia to get any control back from LNP and their corporate masters.

We are rapidly heading to irreversible environmental, social and political disaster, and if we continue voting for these globalist FW’s Greens and Labor as an alternative, we’re doomed.

No one who is not independently wealthy can mount any sort of political career except possibly as part of the party machine for life and clawing your way up through the laberals.
Whether this is a bug or feature depends on your perspective.

This is a feature of a spoiled, wealthy dumb electorate, unable to comprehend what’s unfolding for their own kids.

This is all our collective fault. Nothing wrong with Australia’s democracy.

Ok sure.
Why aren”t you running against the mainstream parties to actually make the change away from labor and the greens that you call for?
Can’t invest the time because you have to work to survive? That is why most people can’t do it.

I’m not running for the reasons I’ve outlined. Australians are too fucking dumb to vote for what’s in their interests.

Plenty of people putting in the effort to take your vote away from LNP, Labor and Greens.

SA get about 2% of the vote despite 80% of Australians not wanting immigration and arguably 20 to 30% putting it as their #1 issue.

the voters ARE the democracy.

You’ve blamed our political system for five years that I know of, now you’re saying …”voters are the democracy”?

Completely agree. Agency theory sure does have it’s costs with representative democracy doesn’t it.

Unlike in any corporate entity, the pay of politicians isn’t even tied to any outcome that matters in society to mitigate the problem.

The real question is, what is the alternative? Direct democracy?

Agree. Am interested to see how TNL performs, as I like their Federal ICAC platform and stories about the political press gallery being threatened with being shut out if they gave them coverage also resonate to the wider sense of unfairness and corruption. While TNL they have somewhat of a presence on social media, it appears relatively small so whether this translates into votes is doubtful.

I suspect the wider voting population is disillusioned with politics on the whole, with most probably voting on the day to avoid a fine and believing each politician is no different from the current ones. As it’s compulsory, more probably see it as an inconvenience with grabbing a snag the main excitement rather than hoping for change or a better quality of life each election cycle.

Have always maintained that people aren’t hurting enough to take notice. Perhaps I am slightly sadistic, but if you vote for a party that is against your best interests and fail to be properly informed or research, then you probably deserve what’s coming. There are plenty out there who only want high house prices yet are the first to complain that their kids can’t afford it and need parental support.  I know unemployed people who continuously complain that they have jump through hoops for centrelink benefits, complain they can’t get on the disability pension or have been stung with robodebt. Did they ever make the connection that the current government who they proudly support had a role in this? I don’t see it as my role to point this out, and from a pragmatic standpoint my industry and livelihood thrives when people are unhappy and suffering.

On the flip side there are those who call for the end to negative gearing and the like, despite having benefited from those policies for years. Pulling up the ladder behind you without recognising this is quite common, but that speaks more to the transition from Australia to EZFKA and the loss of egalitarian ideals.

Over the years I’ve realised people are complacent and aren’t interested in change. A common refrain is that things would have been worse under the other side etc, with people being wedded to their political parties like fanatical football supporters. For those who have the insight to recognises this, there is a sense of pervasive hopelessness – a better government, should such a thing exist, is unlikely to break those kinds of pre-existing bonds leaving us with the current duopoly.

TNL are immigration lawyers and have stated there is NO LIMIT to the number of asylum seekers they’ll fly here. Present yourself to an embassy and Australia will fly you here (I asked them, and after much stalling they admitted… NO LIMIT).

“The very first thing we will do when in government is bring the offshore detainees to their new home here in Australia. The navy can stay where it is for the time being, for we will not be responsible for people dying at sea. But we will work with our northern neighbours to make sure those fleeing persecution, if at all possible, do so by air. We will instruct our embassies around the world not to deny visas to those whose lives are at risk”

More of a cluster fk than LNP, Labor and Greens combined.

Interesting – last I checked they had not fleshed out their policies. Not sure if worse than the Greens and the majors who want 2 million in to make up for Covid although in my mind are unlikely to gain too much traction due to lack of publicity and name similarities.

The bolded sections are an inconsistency to my mind, but also overly vague.

The American Century was built by the willing hands of those fleeing persecution. The Australian Century will be built the same way. There is no one keener to work hard and build a good life for themselves and their new nation, than those who have nearly had their lives taken away.

We reject the notion that more people will clog the cities. Even now farmers from some of the world’s poorest nations are revitalising country towns by bringing skills and population back to them. This is being arranged, with no government help, by caring individuals, here and there. We will legislate real incentives to make it work on a large scale, to the benefit of the country towns, the refugees and the economy.

Those who are forced to leave their homelands will find in Australia, if they care to trust us, a nation which will welcome them into the cog of our economy called ‘hard work’. And they will give us more than we can ever hope to give them.

For those who wish to come to Australia, but who are not refugees, we will adopt a policy based on what is in the best interests of Australia and Australians. Policy will be determined from time to time on what skills are really required and/or what resources the given immigrant can bring to the benefit of the nation. The number of immigrants will also vary from time to time depending on what is ‘appropriate’ given the resources the country has, the resources the immigrant can bring, the possibility of the immigrant taking up residence outside the major cities, the current investment levels, both private and public and on what the environment can sustain. We totally eschew the fruitless argument of Big Australia v Small Australia. These are meaningless terms which are only ever divisive, and take no account of the myriad possibilities a country, its societies and its economic policies will require from time to time in the future. Only a policy based on what is sensible and what is appropriate will suffice.

IMO, TNL are dangerous, and even I’d prefer the filth we’ve presently got running the place. At least I can carve out an existence.

Rich or poor migrants? I’m not sure which are worse.

Both rich and poor and the lives of our offspring are doomed.

I really can’t see them winning any seats, but if even the thought of a micro party threatens your existence, I suppose one question that should be considered was whether said existence was even viable to begin with? I mean, if they’re not doing anything different from Lib/Lab/Greens who are all promoting turbocharged immigration, then surely your quality of life is stuffed regardless of whoever is in power.

I mean you know we’re stuffed when 6 kidders on different ends of the political spectrum like Perrottet and Liz Allen are both championing stupid immigration levels.

Probably going to be demountables, like the ones the schools use, but smaller and shittier, pre-made and imported from a struggling Chinese developer.

If the greens could do maths a lot of their policies would fall apart. And they’d probably be in a bigger party that could command enough votes in parliament to achieve something.

I need a tag that includes the greens. #putglaberalslast?

Some great posts to a great post here. Very interesting, and amusing reading.