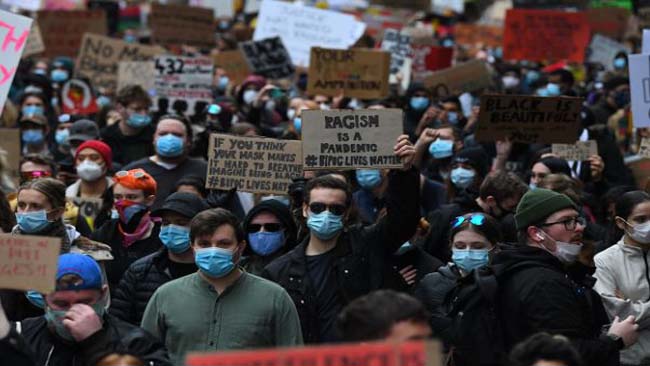 Thousands of missing persons reports have been filed for Victorians that protested Police brutality at the Black Lives Matter protests last year, that are nowhere to be seen at protests this year.

The Australian Federal Police say they have received thousands of reports of people missing that protested last year, as Police brutality in Melbourne gets out of control.

A spokesman for BLM says that protesting against Police wearing black shirts would be racist.

This is one of the best yet.

rukshan is live streaming again, but i think the police have so heavily engulfed the cbd that no protesters want to come out anymore

Its a combination of miserable drab concrete, trashy commercialism/advertising and absolutely squalid people and atmosphere

Just absolutely blows my mind that any white australian would choose to live there
Probably explains why they all support this insanity – the cognitive dissonance is built into them from the very beginning. Melbourne is the best place with the best coffee and you can’t convince them otherwise

and for half of the year the skies are a neverending soulsucking shade of gray, where it got its reputation as being this cool city is beyond me

Been trying to convince the Mrs to move, but she won’t. Melbourne was okay 20 years ago, but the population ponzi has made it into a horrible place. All the green has been replaced by beige. I drove past this drab apartment block yesterday that looked at home in the Soviet Union. There is nothing good anymore about Melbourne. I would rate Adelaide more liveable than Melbourne these days.

Its an absolute fucking disgrace

the vicpol appear to be the most aggressive, millitarised and thuggish police force in aus, andrews victoria is the left wing “woke” version of bjelkes qld

They’ve have been very reasonable by comparison

does anyone else find it ironic that a billion cops can gather in the city to prevent a gathering of non-cops?

Appear? they have had that reputation for years. I remember in the early 90s, the comedy show Full Frontal/Fast Forward mocking VicPol about how trigger happy they were.

do they even know it’s happening ?

PS is the Guardian covering these protests ? Are they mentioning police brutality

never go to either anymore but im not surprised mb is silent on it, theyre absolutely gutless

most of the commenters on MB would be happy the police are keeping them safe from the evil commies spreading the plague.
And if the playgrounds are open again…

Some of the commentariat want non members removed. They want their safe space under their bed reading EmBee.

i am a member and they banned me from commenting

why would anyone else pay in order to be silenced ?

I just read that people are paying the homeless and junkies to get the jab for them!
This is a disgrace! I hope this doesn’t become widespread.
#standwithDan #getVaKKKsed

Nope. But to be fair, they’ve been advertising this for about 12 months and each time it keeps getting pushed back.

Honestly though, they have a much better argument now.

Of course not. Those dog boxes aren’t going to buy themselves!

Vaccine mandate / targets were never about Australians and have always been about opening the borders, this was even stated in their press release earlier this year.

Of course. Must not forget this.

the protests were on btw, watch the feed, they changed the location!

looks like the riot cops got them pretty fast though, its getting almost impossible to pull this off

Huh, streamer got arrested at the end.