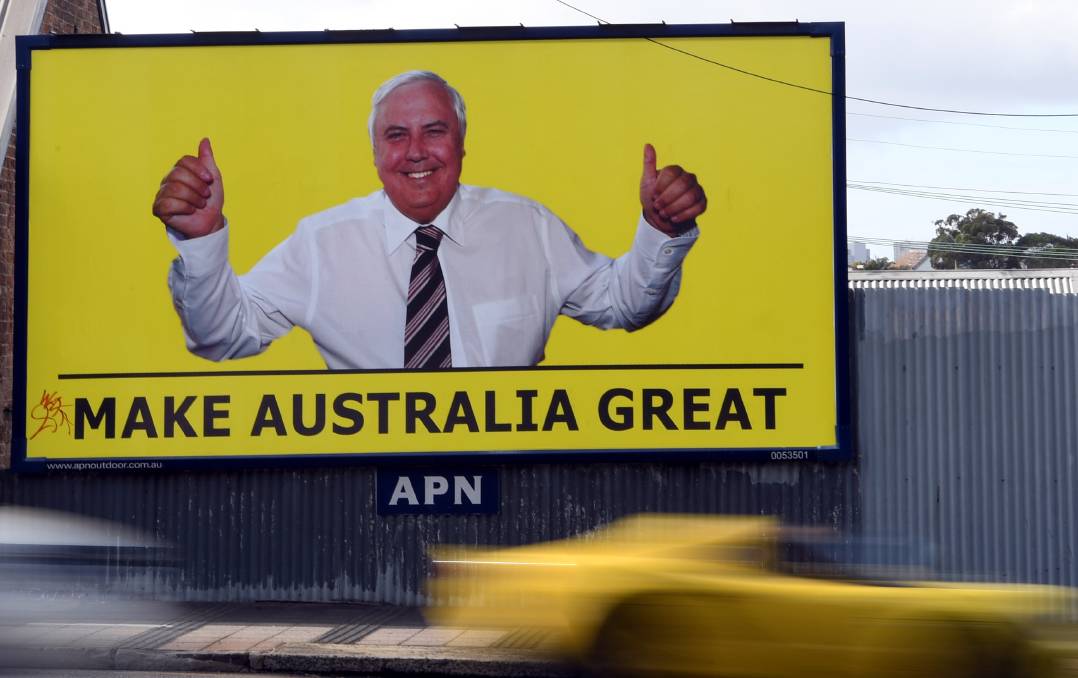 UAP have started a heavy advertising blitz to position themselves for the upcoming Federal election. Seconds into the add they indicate they are far more serious about this than any of the other minor parties with the statement they will run candidates for every seat in the House of reps, and the senate. Whether or not this turns out to be true only time will tell but if it is then they are at least electable into government in their own right. This puts them well above the other minor parties as a potential vector for change.

They seem to be selling themselves as an alternative to the status quo Trump style, pushing an end to lockdowns, freedom, protection of free speech and an end to the “coalition of Labor and Liberal”. This is a message that will achieve traction with a lot of people but the fundamental question is will they deliver on the promise or produce more of the same if they actually win power?

Would this be more likely to succeed without the baggage of Craig Kelly and Clive Palmer? Is it a cynical ploy to capture the voter drift away from the main parties and direct it back to the liberals? Could this be achieved by a party that would be true to the ideals presented without becoming beholden to a cheque writer like Palmer? I’m not sure but it raises some very interesting questions.

Not entirely sure tbh.

Palmer essentially ran interference for the LNP last election. At least he could have manned up and gone through with the High Court challenge.

Both majors will get a smashing but either it’s enough to make a difference is another story. Hopefully the cross bench in the Senate expands, that’s probably the best you can hope for.

A pointless party. Craig Kelly will lose his seat in House of Reps and disappear into oblivion. They might win a seat in the senate at the expense of LNP or PHON and will vote for the same policies as the person they replace.

It would also take a special kind of stupid voter to vote Federally for no lockdowns given that it is a state policy.

We can create thousands of jobs and turbo-charge our exports by processing our mineral resources in Australia, leading to enormous revenue injections and better schools and hospitals.

Australia is failing to maximise revenue from its prized mineral resources by continuing to send unprocessed ores overseas. The United Australia Party’s downstream processing policy will see more stages of the mining process happen on Australian soil rather than offshore, resulting in much higher returns, along with stimulants for both economic growth and job creation.

We can use Australia’s mineral resources to kick-start our economy by setting up downstream processing in the states such as South Australia and Victoria that aren’t resource-rich.

And it ain’t dumb. if you fuck off the bleatings of the fake-green nutters, it makes a lot of sense, dunnit? Of course, the most interesting thing is what is merely implied (and not said) – namely industry policy/tariffs to consciously direct the flow of goods and money, rather than letting it just run according to the globalist agenda….

by setting up downstream processing in the states such as South Australia and Victoria that aren’t resource-rich.

That’s a little dumb. If you were going to process it onshore you’d do it near the resources rather than ship them around for no benefit.
The rest is smart, but is it going to happen? The reason the processing has moved off shore is probably a combination of environmental and WHS laws increasing costs.
Newcastle used to be a city of steelworks fed by the coal in the hunter valley, but the steelworks are long gone and the coal is just exported directly now.

That’s a little dumb. If you were going to process it onshore you’d do it near the resources rather than ship them around for no benefit.

The rest is smart,

for sure, the processing in SA/VIC is not the most efficient, but politically it makes sense to create some benefits there.

besides “near the resources” is a bit of a phantom benefit. The coal & iron ore still have to be loaded onto trains at the mines and unloaded front brakes trains at the workS.

So the only difference is whether the train runs a long distance or a short distance. Don’t know the exact numbers, but it’s a few thousand dollars of diesel – probably a few cents per tonne of transported product.

plus the maintenance of the longer rail links… but on the other hand that means more jobs.

Victoria used to have two aluminium smelting plants, but the one at Pt Henry closed several years ago. I really doubt that anything like a mineral processing plant would ever be set up here in Victoria. Greens would be dead against it and it won’t happen. Yet, they seem to be happy with a large flammable battery. 🤡🌎

Aluminium smelting is much much dirtier than selling houses to each other, mate.

Victoria’s economy is house flipping, coffee sipping and ticket clipping. None of which is dirty 😉

It’s on the video under home loans. https://www.youtube.com/watch?v=XAhIU-VSed4

Craig Kelly will have pissed off plenty with his sms spam campaign. Think he went too early and should have waited until an election was called.

I think they may be recruiting party members as much as promoting for the election. To run a candidate in every seat requires a large membership.

Good point – just read something in the news today that suggested membership to UAP is free and this was the goal. Clearly the press is keeping a close eye on EZFKA :p

They seem to be selling themselves as an alternative to the status quo Trump style, pushing an end to lockdowns,

seems to me that the “end lockdowns” message is an opportunistic and cynical grab to exploit people’s fatigue.

but you’re right – it may work to capture a part of the vote. Hard to imagine that it will do so in a concentrated enough manner that will matter for lower house. Although, perhaps for the particular stigmatised LGAs it might.

another political machine…meet the new boss same as the old boss….
that said, they will be higher on my ballot than any legacy parties

That’s most probably going to be proven right.

it’s interesting that they’re trying to cast themselves as explicitly in opposition to the Laberal Parties, but chances are that this won’t survive the reality test.

I hope they get up, if only to be a painful thorn in the side of the LNP, given that LAB are little more than a bunch of progressive lap dogs.

Not relevant to this but in case you missed this

And they wonder why people don’t trust the CDC and the “science”
https://www.nakedcapitalism.com/2021/09/as-us-prepares-to-ban-ivermectin-for-covid-19-more-countries-in-asia-begin-using-it.html

fuck i cant believe this is published at nakedcapitalism

I need to know what skippy thinks about this

Pretty much useless running HoR candidates. The best bet is to run Senate candidates and run a good campaign. As much as I want to see the back of Labor, LNP, Greens and PHON, chances are quite slim as Kelly and Palmer are damaged goods. Personally I wouldn’t mind a few community focused independents, but they are rare. As we have seen with Trump, the whole politico complex is there for itself and outsiders are not welcome.

The only way to beat the system without overthrowing it is to win the house of reps. All the senate gets you is a veto over something not supported by the liblab coalition.
As you say it’s probably not realistic though.

I think it is the Senate we’re a minor party that gains some blocking power, has the ability to start defining itself as the real opposition by forcing the major parties to constantly and publicly work together in order to pass legislation.

From there it could eventually be possible to build a beach head to go for the house of Reps. The trouble is, whenever on of them is gets to the position where it is possible to do so eg PHON they get bribed into working with the Govt by the Govt appointing them to various sub committees, which is where politicians get their pay boosted.

We are yet to see a minor party that is determined to break the system, and prepared to risk sacrificing its political success by repeatedly blocking bills and risking double dissolution elections.

We are yet to see a minor party that is determined to break the system, and prepared to risk sacrificing its political success by repeatedly blocking bills and risking double dissolution elections.

Very few issues will get the current liblab opposition to want that double dissolution to happen.
You also end up with the issue that as your party builds to success it attracts politicians and your mission is replaced by petty politics. See the greens or the implosion of the democrats for the likely path your minor party would take.

by forcing the major parties to constantly and publicly work together in order to pass legislation.

How much does this happen currently and does the general population even know? only remember hearing about things that actually get blocked so don’t have both party support.
For instance this went through very quietly.

Yeah – at this stage I think there’s virtually no chance in altering the trajectory that we are currently headed. I think it is more important at this stage to start preparing for when it all fails.

more important at this stage to start preparing for when it all fails.

I’m not sure I’m young enough to care now, and I’m not that old.

If not for me then my kids.

I hope COVID takes out that fat f***.