The Economic Zone Formerly Known As Australia is facing a critical shortage of conspiracy theories, as more and more of them begin to come true.

As lockdowns, QR code surveillance, masks and mandatory but not mandatory vaccinations proliferate, the Morrison government was concerned that the gap between conspiracy theory and fact was now down to a few days.

“It’s frightening for us and the spin doctors. We still have overt martial law up our sleeves, that’s why I’ve got Lieutenant Frewin on the television as a veiled threat. But after that happens, fucked if I know what we can come up with,” Prime Minister Scott Morrison said.

‘Greg Hunt is out there doing his best massively inflating the vaccination numbers so we can trick people into taking the vaccine with some good old-fashioned FOMO. We all know the vaccine passport and social credit scores are what we’re after. However, if that doesn’t work we may also have to pull the aliens card.”

Despite the increased resistance to lockdowns and public sentiment turning against state premiers, Morrison remained confident they can deliver.

“We’re confident we can still hoodwink the population. Majority of them act like useless eaters with sub 90 IQ’s, so what do we care? We aren’t the world’s longest running penal colony for nothing!”

The title is a gem in itself.
As Spartan as something can be said.

Kudos for using the elite’s favourite term ‘useless eaters’ to denote us plebs.

“We still have overt martial law up our sleeves, that’s why I’ve got Lieutenant Frewin on the television as a veiled threat.” 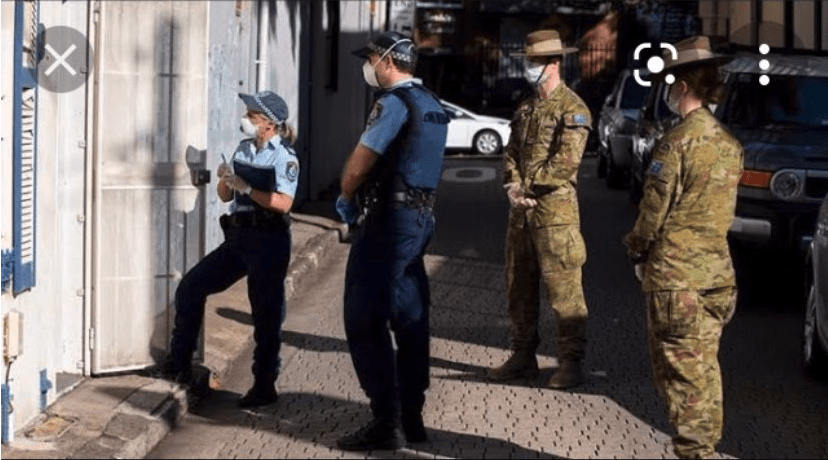 do you know what was going on there? just a routine check of a small business or something?

It was a screenshot I took from some Twitter feed but can’t remember where exactly.

Thinking about it now it could also be that the army was there to watch the police and make sure they wouldn’t brutalise the peasants too much.

ADF was in Victoria in September and it didn’t stop this: https://www.theage.com.au/national/victoria/senior-police-officer-in-epping-head-stomping-incident-suspended-20200915-p55vpl.html

Yeah, I remember that. Terrible conduct.
Lucky it was caught on video.

If you are self isolating and don’t pick up the phone they send the cops and army over for a visit.

Assisting is a stretch.
The military are with the police because the military don’t actually have any legal powers to do anything on their own, so not really sure what the point is. Except maybe conditioning as you say.

There is no need for them to be there if they don’t have legal powers.

Not even intimidation really, an unarmed soldier is less intimidating than armed police in my opinion.
It’s not like it’s elite combat troops that are being used.

conspiracy theorist is the new control the masses slur, its almost as meaningless as “racist” now

Aussies with the world’s softest cocks (sorry Peachy no disrespect to the fairer sex).

Aussies with the world’s softest cocks

Do you mean me? My sissification process is going well – I’ve been listening to my hypnosis tapes every night, going to sleep with my fingers on my nipples imaging them becoming engorged breasts…. I can’t even get an errection with my pin dick any more unless I can imagine Tyrone plowing me from behind.

Dued – I think you should just go through with it and get your meat and two vege completely shaved off, you could probably do it yourself at home with the razor you use to shave your legs.

what a weak kunt 😂

What isn’t in short supply is hypocrisy of the leaders. In Victoria, the Premier was wanting international arrivals cut by 80%, yet he was very happy to have 1000 tennis players. The Queensland Premier is happy to cut arrivals by 50%, but wants an exemption to leave the country.
Let’s not forget McGowan whose police have accessed the QR checkin data. Oh yeah, QLD cops have done that too. Victoria Police have tried three times and the government has basically said all is okay if you have a warrant. So much for checkin data is safe and only used for contact tracing.
If you posted 12 months ago about this, you would have been branded as a conspiracy theorist and yet here we are. The apathy of the population is something that I don’t understand.

I forgot to add that the Victorian government wanted to arrest people who they thought would disobey rules. Imagine the reception you would have got for that theory early last year?

I greatly suspect that the QR checkin thing is going to become a permanent feature of life, no matter what happens to the virus. It’s just too good a means of tracking and control for the vermin to give up. All for our own good of course.

If that eventuates, I think it’ll be when I start resisting.

A fly in your ointment
Reply to  LSWCHP

It is already voluntarily done by all mobile phone users

State governments are making it mandatory and fining businesses not complying.

I am totally with you on this, but how would you resist?

To get real change you will need a meaningful part of the whole population to resist.

The problem is that our overlords know how to play us psychologically. They will tell us, as you stated, that it is for our own good. And most people will believe this.

Most people will say they have nothing to hide so why complain about track and trace? I then alway say that you might think the government we have now is ok, but just imagine if some day the government turns into Stalin, Hitler, Pol Pot, anything you detest most, you wouldn’t even be able to resist. For instance through data collection (AI) they find out we have posted some content that is not favourable to the government. The next time you use your QR code ‘thought police’ will be notified and pick you up at the relevant site.

Most people will react in some form of: “Naaaah! That’ll never happen! That’s just crazy talk!”

Ok, maybe it’ll never happen but you still should never give a government so much power that they can abuse very easily and use it against the people.
As long as people don’t realise this there is no hope.

LSWCHP, when you resist on your own and you get carted off to a camp for ‘re-education’ the people will call you a “filthy anti-vaxxer that wants to kill granny and good riddance”. That’s how far the brainwashing has gone. It may sound cowardly but in my view it’s no good being a martyr, you’d only waste your own life for what, the people? Give me a break. Or only for yourself as in “Better to die a hero standing up, than a coward on his knees” I get that completely but not worth it in my view.

I already left my country because I didn’t like the trajectory it was on and feel very bad about that, even cowardly. But it is no use to stand in front of the herd when it’s stampeding, because you will get trampled.
I also realise I can’t keep running away from what I see is coming.

We are very close to the point where engaging in civil disobedience comes with the risk of being cut off from society.

What is the answer? I don’t know.
Maybe more people like us should get involved in politics?
Maybe more protesting? (Which is not allowed right at the time that they are pushing all this crap on us, funny that…)
Split the country in two and have one state for ‘us’ and one for ‘them’?

Maybe some here have ideas?

That would be the easiest way out but it doesn’t resolve anything in the end. The ways of the world catch up with you whether you want to or not and are forced upon you.

As I said can’t keep running away or living in denial, at some point you have to take a stand.
Just wondering what some think would be the best way to go about that.

Makes me admire the French. They go on strike or protest at the drop of a hat.

I was kinda serious dudes and dudettes.

Has anybody thought about this?

Maybe we need an independence movement like the US had getting away from their rulers. I don’t see why a peaceful break with our overlords shouldn’t be possible. Can’t we have a ‘free’ state?

If it can’t be done peacefully it is going to end up ugly I think.

Had to look that up.
Nice effort by Mr. Casley.

WA handled that in a way that I wouldn’t have expected.
The heavy hand of government wasn’t used from what I can tell.

“The Principality’s owned land will be sold off to settle the tax dispute.[14][34]

That’s usually how and why it ends.

Yeah, the tax man will eventually get ya!

Branch stack one of Ermo’s sacred Labor branches, then horrify the ALP, ABC and SBS, not to mention the Chamber of Commerce, Universities and Harry Trigguboff, by using it as a soapbox to rally ordinary Australians into opposing further mass migration and ending MultiCult, to the point where they either actually throw you out of the Labor party or you split it from top to tail – one side Australian workers, the other side sell out professional classes and academics.

Before you can build anything, you need to destroy what was there before.

“Before you can build anything, you need to destroy what was there before.”

Isn’t that the MO of the Cultural Marxists?
Won’t be much left over to destroy soon. *Chortle*

At least we will have the knowledge and ability to re-build.

While the purple haired brigade is still contemplating their pronounce for that day we will be doing our Bob the Builder stuff.

You may as well start your own party, because the labor heads and the media aren’t going to give you any publicity even if you manage to do this.

Only heard about these guys via the DFA podcast, but the New Liberals are making some right moves – Federal ICAC with powers to prosecute. Would be keen to see some politicians behind bars.

Nah – the media are captured. They’d rail hysterically over the nationalist or racist in the midst of Labor and give it enormous airtime. The Labor heads would try to quash it, but the Libs and media would keep it alive until it came to ahead.

Of course it would only stand a chance of success if they were elected to parliament before they actually revealed their true position on the subject, otherwise I would agree with you – if you tried running as a Labor candidate on that platform the media and labor heads would bury you.

Not many comments here regarding what people see as solutions.

Just what I was afraid of,
we’re well past political or good faith solutions.

We’ve gone from people literally dropping dead in the streets of China to a super strain where people over the age of 70 with co-morbidities need hospitalisation. What conspiracy?

A fly in your ointment
Reply to  canuckdownunder

I hear if you eat the children, you get immunity…

The only error was that the rich kids are now also going to be sterile …..