Not the BSV article I was going to post a week or so back (gotten lazy and haven’t finished it off). This is just a link to someone else’s work.

A couple weeks back I wrote ‘UTXO and Other Blockchains‘ and mainly expanded on the difference between UTXO and ‘State’ based blockchains, and touched on a couple more.

Basically all the blockchains in the world are either clones or forks of BitCoin, clones or forks of Ethereum or clones and forks of Monaro… or so I thought. One chain that I mentioned in the UTXO post was Solana, which among a few other observations I had this to say:

“There was lots of excitement about Solana just prior to the May crypto catastrophe, that prompted me to take a quick look at it. Firstly it is a ‘gossip database’ which although more effective than a simple state based machine like ETH, still requires centralised processors (that they refer to as towers) in order to maintain the network – which like most of these ponzi tokens is a simple POS model, meaning they are a security under the Howey Test.”

Anyhow, I came across ‘Zeme Gaoson’s’ blog post which illuminated a few aspects of Solana that had previously been a bit hazy. It shone enough light on the coin that I thought it worth sharing for those interested in types of crypto.

Basically the TLDR observations of the article are:

As I mentioned Solana is basically a gossip database, it ‘blockchains’ this database by introducing a chain called ‘proof of history’ which allows parallelization, like UTXO, however, unlike UTXO a Global State is NEVER achieved:

“The fact that Solana does not use UTXO has vastly important implications. First, it means that parallelization is not at the fundamental ‘asset’ level, but rather at a higher ‘transaction’ level. As a result, there is no intrinsic baseline truth in Solana as there is with Bitcoin blockchain. At a specific point of time…”

This has significant implications for the ability to execute smart contracts, as well as the inter-operability of different sectors of the Solana network, without expending significant effort on synchronizing the network, something that appears to have been behind the destablising crashed I noted previously in the UTXO story.

Anyhow if this is something that interests you enough to read beyond my TLDR summary (which in itself was probably TLDR), then without further delay here is the link

A bit off topic but not completely.
Re-post from weekend links.

Any views on Bitcoin anyone?
For now it seems to be stuck in some weird consolidation pattern.
Technically it should still go up to ~T45k region.
If it keeps going down from here without any major up move first would shatter confidence I think.

After topping in 2013 and 2017 it took more than a year to bottom out with massive percentage swings in between.

At the moment there still seems to be strong support at ~T30k: 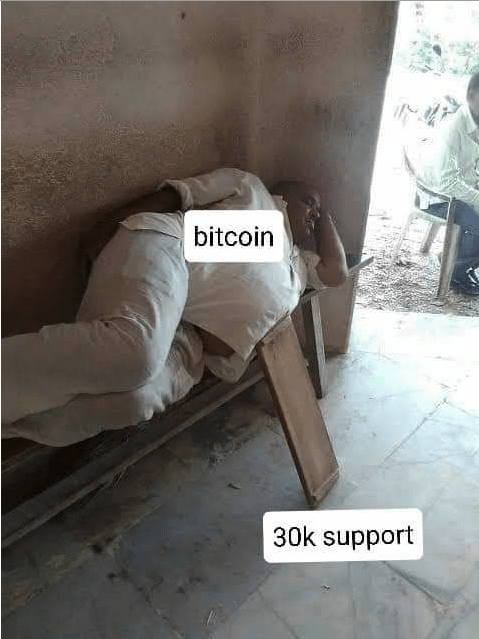 Michael Saylor’s MicroStrategy is up 70% since May.

TradingView has this to say about MSTR:
“MicroStrategy, Inc. engages in the provision of enterprise analytics and mobility software. The firm designs, develops, markets, and sells software platform through licensing arrangements and cloud-based subscriptions and related services.”
Does it still do any of this? At this point it’s more a leveraged YOLO Bitcoin fund.

Binance is in the cross hairs of regulators, how long can they keep running from country to country?

Binance is the largest cryptocurrency exchange in the world and ~4x larger by volume than number two.
Being scrutinised by regulators in:
-US
-UK
-Canada
-Japan
-Thailand
-Singapore
And not allowed to operate in Cayman Islands.
That’s big I think, if you can’t even set up there.
Red flags all over the place.

But nice to know that Binance founder Changpeng Zhao is good at making friends and will end up on his feet soon, or knees…: 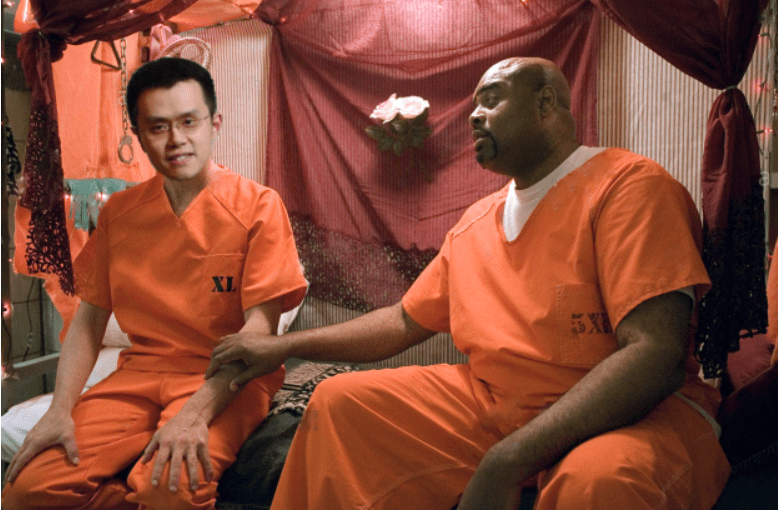 People should not underestimate the role Binance plays in maintaining the fiat to Tether link – it’s entire business model is built around it.

An old but informative link:

They were expecting a $500 million profit for 2018, not bad.
But maybe they should call it a 500 million Tether profit?

How would they turn their Tether profit into ‘real’ dollars though if they wanted or needed? They can’t use their own exchange. So they will have to turn Tether into Bitcoin and then sell that Bitcoin on a crypto-to-fiat exchange?

Maybe also a reason why they prefer to distribute profits in their own BSB crypto currency, and even: ‘offers employees to get paid in BSBs’. Pretty smart…

Also they have never been authorised to operate in Malta.

Why do these people seem to be caught up in so many lies?

There remains only one real game in town within the crypto space – how to remove your wealth from the system without causing the entire space to implode.

i) Constant mining drain of real liquidity from hashing, although with the fall in hash down from 50m per day to probably around 25m per day;
ii) Systemic issues with regards to stable coins ie Tether & USDC;
iii) Binance increasingly presenting as a significant risk;
iv) The Microstrategy bullseye at $26k; and
v) The continued advancement of KYC/AML and other regulations.

There are probably many other issues, but any of the above could easily cause the entire crypto space to blow up at any time.

I’m just surprised knowing Bitcoin’s volatility it seems to be suspended in this range for this long.

It’s waiting for something…

Or the jig is up: the big money can’t sell because not enough dollar liquidity and for some strange reason they don’t want Tether.
And nobody is buying because they want to find out what is happening with regs first.
In the meantime price is going nowhere.

If it does eventually move it could be a big one.

all of this is irrelevant

the only thing that matters , with regards to making money from a Ponzi scheme, is psychology

“the only thing that matters , with regards to making money from a Ponzi scheme, is psychology”

I will agree with you that there is truth to that statement in respect of people trading cryptos. I certainly would have done considerably better financially over what I have already done if I had chased and traded the ponzi.

What I waste my life on or what I find interesting is my own business.

It is one thing to knowingly trade a ponzi, it is another to believe your are investing and trading in seriously products or valid projects – most people in this space believe they are doing the later…. basically they have been ‘Fooled by Randomness’ and believe that they are geniuses or ahead of the curve, when the reality is they’re simply caught up in the madness of the crowds.

If my musings, interests or investigations help one person avoid disaster or opens their eyes to the risks they are incurring by trading in this ‘industry’ (an industry that I believe is 99% fraud or hot air) then it will have been worth it.

Who cares if people walk into a disaster as a result of their own greed ?

not very libertarian of you

One of the characteristics of a libertarian is their willingness to help those in their community. They believe in small Govt, not selfish societies.

I find the technology fascinating, especially in regards to micro-payments. That said, I also think that 99% of cryptos are fraud or hot air, and that Crypto exchanges are probably one step below FX CFD providers in terms of being a casino or Muppet slaughterhouse.

Libertarian? You’re more lesbian than libertarian with that T count of yours, ya cuck 😂

Nah – I was just espousing the philosophy behind Libertarianism, I wasn’t actually saying I was a Libertarian. I’m more aligned with National Socialists.

This was always the easiest way to do it, stop transfers to and from regular bank accounts to crypto exchanges. 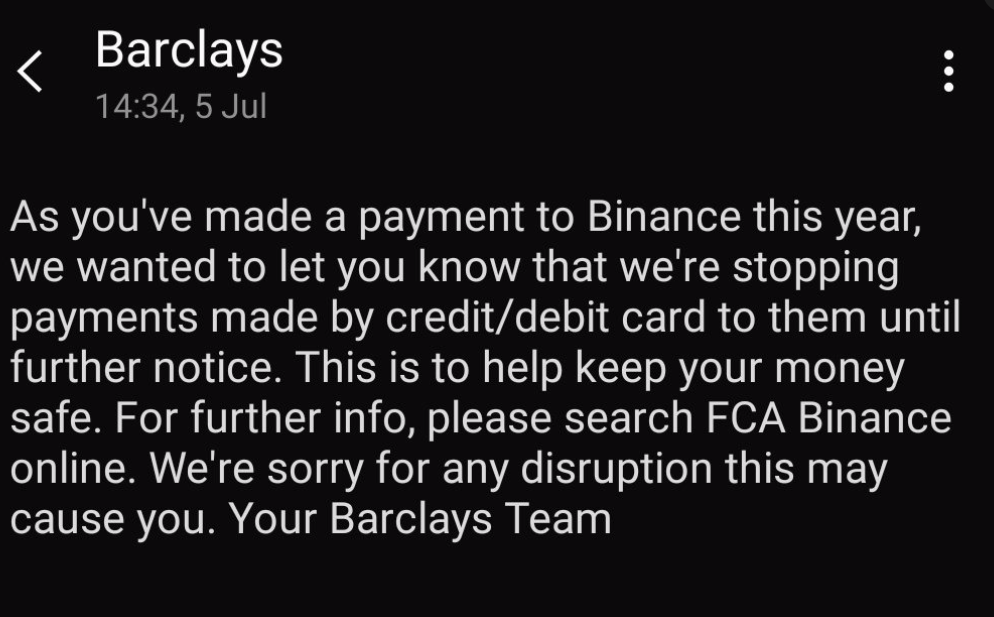