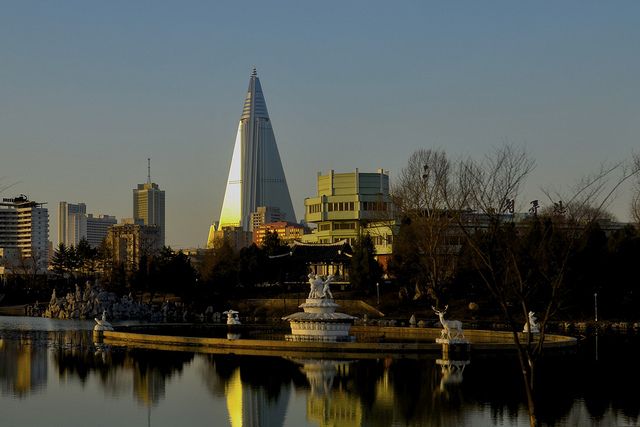 Residents of the EZFKA state of Victoria have started moving en masse to North Korea in a bid to escape continual lockdowns and arbitrary restrictions from COVID regulations.

Melbourne in particular has experienced a mass exodus of former residents heading for North Korea, who have stated that they are hoping to experience some freedom and less government interference in their lives.

Google also says it’s Australian search reports for real estate in Pyongyang have gone up 500% since the end of 2020.

“It’s a great time to buy an investment property in Pyongyang. Property only ever goes up mate! Get in quick! FOMO!” North Korean state housing minister Ban Yoon Park said.

Acting Premier James Merlino stated that this was a massive over reaction and he was not worried about the totalitarian Police state he was implementing.

“It’s a reversal of the mass immigration ponzi scheme we’ve seen into Victoria the last 15 years, but I think it’s a way overblown reaction from some of these people,” Merlino said.

Merlino re-affirmed Melbourne’s global city status was not under threat.

“Melbourne is still the world’s most liveable third world city and that just means we’ll have to lobby harder to get more third world migrants to replace those legacy citizens that have left.”

It’s not meant to end. They’re a demoralisation tactic to get you to submit.

Curfews and roving dog patrols in 5 4 3

It was a probable outcome.
You either let it rip, or you don’t, but don’t means don’t until it goes away, but a widely spread easily contagious disease like this is as likely to go away as the flu or common cold.
Imagine in another year or two or 5 when we are STILL locking down…

yeah agree it was a probable outcome. But it wasn’t sold like this. I remember it was sold as the “hammer and the dance”, but the dance wouldn’t have been quite so prolonged, or the lockdowns in the “dance” wouldn’t be so restrictive.

You need to remember you are being “managed” by the government, and they aren’t all that happy about the inconvenience.
And also, “Never believe the marketing”

Imagine going back to when this started over a year ago and telling young people that they’d be giving up their freedom, their jobs, their stable income and chunk of their retirement super. Only for house prices to be even dearer and boomers demanding they get a vaccine that causes them more harm than the virus so they can open the immigration floodgates once again…

Last edited 1 year ago by DictatorDavid
1

The young people don’t have a class consciousness.

this is one of EZFKA’s greatest assets.

I ask myself this question, and wonder whether the voters of EZFKA would have agreed to go down this route had they known what was in store. and then I find the answer: yes they would.

Given there haven’t been elections when they could do anything about it, it’s a moot point.

I guess I’m thinking about WA and QLD.

and it’s pretty obvious what Morrison is up to to get re-elected.

Last edited 1 year ago by ThePensum
0

The part about the vaccines is spot on. Magically there is availability for Pfizer vaccines today being spruiker in the press because apparently the Pfizer one is magically better than AZ because marketing.

This is how I read it, too. Vaccine rates probably too low for a quick return to reopening of the peopling strategy, so this happens to put the frighteners into the recalcitrant EZFKA units and push them into teh medical experiment facilities.

Pretty much explains the vaccine hesitancy. People know what will happen once we reach an acceptable level (probably a level slightly lower than herd immunity).

The joke is that Vic residents have been fleeing north for decades. Mostly to qld which as a result is 10% more Australian born.

I did the other way and now regret it. Brisbane is now more liveable than Melbourne

you’re quite the talent.

You are right about Melbourne being the most liveable third world city. Was nice two decades ago, but now wishing I moved to Queensland several years ago.

Danist is the new Sadist

100 per day this time next week? We’ve done this before Victoria, we can do it again.

Nice.
McClown of course put restrictions on incoming melbournites well before this lockdown was announced.

Anyway, this is what the voters of EZFKA want. Closed borders. No vaccines. More lockdowns.

That woudlnt be too bad, if it were an option.

Last edited 1 year ago by Ramjet
1

…and now get ready for quarantine escape in remaining states, the new and more dangerous strain, the Canadian one!!!

I think the difference between NSW and Victoria in terms of WuFlu outbreaks has finally, conclusively proven that Lebanese securities guards are more effective than Indian security guards. No one is more surprised than myself.

Maybe it’s just the stereotypes that have been conditioned in me, but it seems to me that

Little wonder if prisoners fall into line better when guarded by the Lebanese berserkers.

Stereotypes, although having been manipulated into the public consciousness as unfounded bias, are in most studies generally proven as being accurate and increasing effective personal decision making.