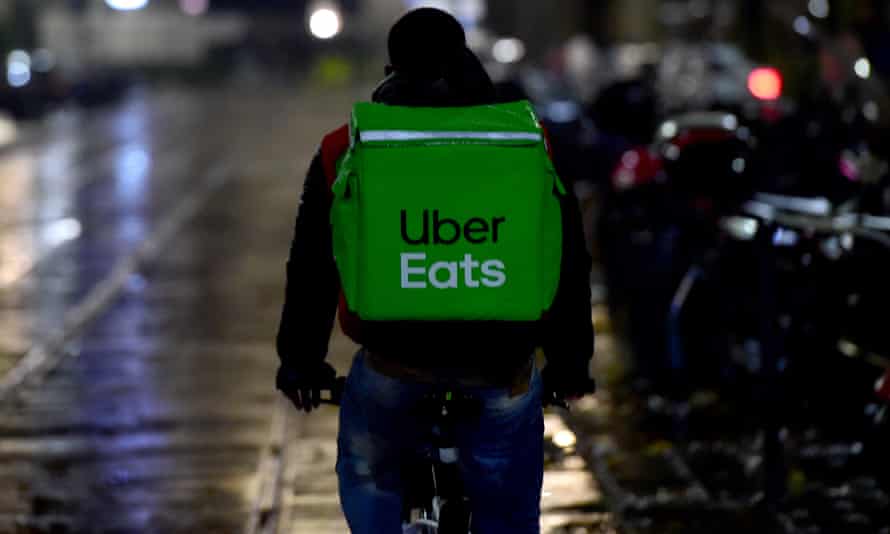 The EZFKA city of Melbourne is reeling tonight, after a multiple fatality accident in the CBD killed three citizens.

An Uber Eats rider has been taken into custody and charged with three counts of negligent driving causing death, after three pedestrians were killed after they were struck by a scooter on the footpath.

Speaking through an interpreter, international student Gurpreet Singh said he was not at fault when he was driving at 70kmh’s on the footpath and that the industry needed to do more to protect riders.

“Actually sir, I was just doing my job. Not going to class while working 120 hours a week on my student visa is very difficult. In India I can drive anywhere I want. Australia should kindly do the needful and respect my culture sir,” said Gurpreet.

Gurpreet, who bought his licence in India and has ridden on it ever since coming to Australia, said the cultural and language barrier made his dangerous job of undercutting Australian restaurants and putting road users at risk even harder.

“Not knowing where I am going and spending 95% of my journey looking at my phone is hard sir. Industry need to do more to protect rider sir.”

Melbourne Lord Mayor Sally Capp and Menulog CEO Leon Kamenev both said that the road rules in the CBD were clearly racist and would be looking at changing them in order to accommodate our “burgeoning wage theft economy.”

i can’t stand the proliferation of food delivery services, it’s the most annoying aspect of the modern economy

They need it couriered to avoid missing out on MasterChef

Blow me. I get maccas delivered at 2am and it’s only about 400m from me. Why should I go there much less make it myself?

What you’re really saying is that it sux the plebs get to have servants – albeit rented for short bursts – and only bankers do productive and that’s why they can afford personal chefs….

I presume that you are taking the piss, and not being a Progressive demanding a right to your own lesser paid servants.

Last edited 1 year ago by Freddy
2

Taken from the book of Triguboff:

“If I need a plumber at 2am in the morning, why should I care if he speaks English?”

There is no society in EZFKA, just consumer units and the meritocracy. Who cares who brings me my food or repairs my plumbing? Does it matter if the imported worker can speak English? Has no family to support or bills to pay? And the depressing effect it has on wages for the lower classes is their problem. So long as I am served that is all that matters.

Except Trig could afford several speaking mandalorian if he wanted. The reason he said it is it speaks to Joe schmoe who actually has that problem.

Solve the problem, don’t hate people for having their life made easier…

“Solve the problem, don’t hate people for having their life made easier…”

Imported servants working for a pittance solves the problem of whose going to change your diaper, but does nothing for improving the lot of our existing poor and under privileged, it just brings in more people for them to compete against.

But I suppose it gives some the opportunity of proclaiming their virtue, like the Pharisee’s of old, while carrying on like so many little lord Fauntleroys as imported slaves wait on them hand and foot.

“don’t hate people for having their life made easier…”

Life wasn’t made to be easy. Enslaving a society can be done in one of two ways, i) through violence, or ii) appealing to individuals selfishness and execution of their ‘rights’ over the cost those ‘rights’ imposed on society.

The essential characteristic of being a Juicey is demanding your rights be satisfied above your obligations to ensure that the needs of society are best met. Self over society didn’t start with the Boomers, they were just ground zero for the cultural takeover.

As you were Boomer Shlomo.

No – you will just undermine society by supporting the importation of workers to do things that would be too expensive for you to afford, if you had to pay locals already invested and integrated within our society to do it.

The problem is easily solved. Protection:

If that means you pay extra for food delivery then so be it.

The west has been enslaved by appealing to that selfishness.

Meanwhile every ‘saving’ that is delivered ends up being confiscated by land prices or more to the point, credit servicing, which all those imported servants also help provide the system back pressure to ensure it remains inflated.

Societies should be relatively closed economic systems, that is the fairest way to ensure the productive efforts of society are best shared among its participants.

It is an appeal to individual selfishness that has opened our societies up and destroyed the equilibrium that would have otherwise largely been achieved.

Nobody said importing slaves and most people understand that what you call imported slave, the slave calls a better standard of living with more freedom 🤷‍♂️

“Nobody said importing slaves and most people understand that what you call imported slave, the slave calls a better standard of living with more freedom”

How very Talmudic of you.

Pretending your laziness is virtue and you are making life better for everyone other than those you already despise… existing Australians who you regularly sneer and look down upon.

As you’ve regularly made clear, Australian people and society doesn’t exist for the likes of you, other than as an economy there to serve you.

The economy most certainly does not serve me, I have done far far more for Australian society than it has ever done for me – I worked at Alfred ICU for 7 years to get them off pen and paper and have never spent a day in hospital as a patient. But I do live in a small room in a small apartment shared by 3 people because house prices 👍

Boo-fucking-hoo. So you did a little volunteer work at a hospital and that gives you the moral authority to criticise ME as I object to MY society and culture being dissolved and my nation raped and pillaged by a bunch of Globalists? Yet you expect me to sympathise with you because you can’t afford a house, lol.

Your wokeness isn’t a sign of your moral superiority, it’s just your equivocation and justification over taking part in the dispossession of existing Australians of what is theirs, and the erasure and denigration of their identity. You’re no better than Triguboff…. nah worse, at least he’s not a fucking hypocrite.

You remind me of the very young academic version of Freddy back in the 90s. I tried explaining to all those complaining about high taxes and high interest rates that this is the best that life will get. I was often met with contempt and didn’t quite get to explain that aussies are idiots who would borrow as much money as they were allowed to borrow, and that the choices were one of:
1) Better public services, better retirement, higher savings rates, etc
2) Higher house prices

the only difference is who exactly benefits…. 😉

True. It is also very easy to convince the idiots that lower taxes and lower interest rates means more money in their pockets. We are all gunna be rich.

“aussies are idiots who would borrow as much money as they were allowed to borrow,”

The only additional insight I’ve gained over that statement is that the economy is now deliberately geared to ensure that Australians must borrow the most they possibly can in order to get access to one of the most fundamental necessities for society to perpetuate itself – shelter.

It is only the Sydney and Melbourne economies where this is true. You don’t have to compete nearly so hard elsewhere (unless you choose to).

Yup except people like will just find a technological way around that to lower cost. Having a rumba instead of a cleaner is fine by me….

I don’t see technology as a problem. We can still aim for full employment. If there is not enough work to go around then keep reducing the number of hours in the working week.

If there is not enough work to go around then keep reducing the number of hours in the working week.

Nice in theory. Doesn’t work in the real world so much. At least for most skilled jobs.
Just look at overtime stats, at least pre covid and maybe during. People are doing more than the working week.

It doesn’t work when workers fear losing their jobs and becoming homeless. It worked well when we were close to full employment and workers could quit their job and find a new job on the way home.

They were called Penalty Rates for a reason.

there are servants you could get for that too. Just call the PMO – they have a good list!

i’ve never used a delivery service in my life, i actually like going out in the rare event i actually want to spend a premium on food (cheapskate). sittinga t home in my apartment by myself chowing down on some delivery takeaway just makes me feel depressed. there is a weird trend for people in my generation and younger towards complete and absolute isolation and it weirds me out.

See, I knew it! You were just passing off your personal preferences as more admirable – I didn’t do that, as for the other douchebag comments I lived with uber delivery dudes and they get uber eats delivered.

I live with them, the very servants I referred to, because I hate landlords and will only pay the least possible….

The problem isn’t uber or cleaners or assistance/care – the problem is there’s no mobility for those that want it and “apply” themselves.

its not some kind of meritocratic system where the capable are incentivised so that their success might lift all of society.

It’s siege/positional warfare where everyone tries to secure and protect a patch. Then they try to capture/harness the capable ones, lock them in a position of subservience, in order to ride them for profit.

Were you one of the pro-lockdown pansies that let your delivery driver take all the virus risk on your behalf for less than minimum wage?

Never used one of these services, but I’ve had a number of free meals from their mistakes. Like the crappy couriers Australia Post uses who never knock on the door when making a delivery, Uber Eats clearly employs those with a similar attitude!

LOL – although satire, the framing is EXACTLY how the ABC or SBS would have run with the story.

I am glad it had the satire label on it. It is difficult to tell nowadays.

Plot twist, this is the bloke’s second high profile incident as he was the logistics specialist involved in this earlier news story:

Flood victim identified as a software engineering grad who started his “dream job” as a truck driver.

WTF did I just read? Cunt tried to drive through flood waters and drowned because he was a dumb shit?