looking at the results it’s not hard to glean:

labor moved a bit to the right and captured the median voter in response to their failure in 2019; they picked up LNP voters and lost greens supporters due to this.

lots of former liberal voters in rich-fag electorates don’t really like their perceived positions on climate change etc right or wrong, and that cost them some seats to independents.

covid is completely done outside of state mandates and in WA and its so embarrassing no party even wants to talk about it. they all just want people to forget the completely embarrassing debacle that was the last two years and for the most part, people already have. UAP was 8 months too late if the election had been in nov 2021 they might have won some seats. i don’t think labor is going to bring back lockdowns or mask mandates or anything, maybe they will here and there but it won’t be anything major. people are over it and politicians don’t want anybody thinking about it again because it makes them look so stupid.

ONP got some swing their way but it didn’t amount to jack shit. there is no appetite for these parties in Australia and there’s no ‘silent majority’ unfortunately, no one cares.

the main parties still saw their primary first preference vote continue to decline further, but i don’t really think the teal independents are truly any different and that accounted for a lot of this, so who cares.

Labor has inherited the poison chalice like Coming said. they are going to preside over a multi-year long economic cluster fuck and deteriorating global environment. this will probably be a one term government, at the very least the next election will be far more interesting.

Given the shitstorm coming this would have been the election to loose, probs why smug cunt was not that upset about it.

I am not mad, just disappointed that the minor parties did not get in to make it a minority government so there would be a clusterfuck going on trying to get anything done, but there is still hope they don’t make the 76

We have a whole bunch of rich wahmen working for a billionaire holding the balance of power. What could go wrong.

I’m sure Simon and his harem (including the comically named David Pocock) have our best interests at heart and all will be well.

It looks like it costs about $1m to buy a seat in the reps, and considerably less for a senate seat. Inflation is everywhere these days, not just petrol and food and gas.

Remember when we had Glenn Lazarus as a senator? Pocock will just be the same meathead shit.

I DGAF either way really, buying ammo while it’s still cheap and sharpening the hunting skills because things are going to get really testy before the year is out.

Unless you believe in the integrity of the election. It can’t happen here, right

Disappointed that DL didn’t get into the Senate.

I haven’t even looked at what’s happening in the Senate, that’s where we’ll have to judge the performance of the minors.

UAP are a weird one, Craig Kelly is a poisoned chalice and some of their policies are just bonkers, like under 3% mortgage rates. Ignoring the impossibility of enforcing this, this just supports the entrenched wealth of the boomers and I’m sure a lot of the voters upset with the majors would prefer to watch the whole thing burn. Although maybe UAP get the older protest vote?

It was the Labor party that needed destroying, instead the liberals imploded.

The destruction of the ALP begins now with the economic shitstorm. Problem is we all go down with them in the interim.

Apart of me thinks that the Libs used this election to clean house…..have a look at who lost their seats.

craig kelly lost his seat too

It will come. Liberals imploding is an acceptable start.

I’m pretty sure they will buy about a billion doses of monkey pox and legislate to kill the rest of us. 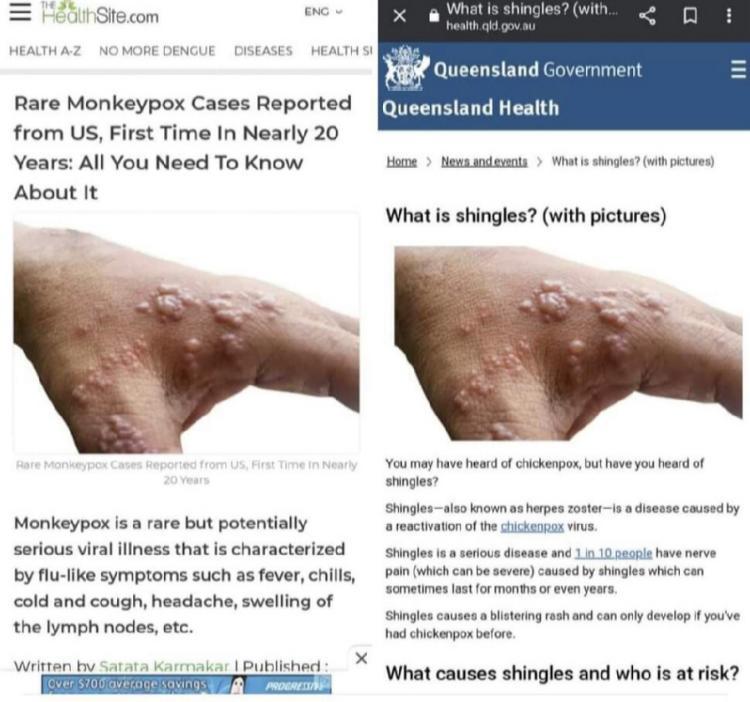 The pictures are the same but two different syndromes.
Maybe people with shingles are getting diagnosed as monkeyfuckers by mistake?
There’s also some chimp jizm in the recipe for one of the jabs – think it was arsetra zeneca.

Here it is. Made with chimp shit.
https://www.thehealthsite.com/news/did-you-know-that-covid-19-vaccine-used-in-india-is-made-from-chimpanzee-poop-806111/

Maybe the journalists at thehealthsite.com are an incompetent and lazy bunch of useless cunts that stole the first picture they found…

DGAF about elections really but for arguments sake if there was ever one election to lose in Australian history this was it. Interest rates or inflation, pick your suicide pill.

Albo won’t last it will be the asian child stealer or Plibersek in a few months time. More attackd on the family, more trannies etc.

MB will get this one wrong like they did with Jacinda Ardern. DLS will gloat for a few weeks and then the RBA raises again in June and he starts shitting bricks.

I said in the other thread the last 2.5 years has taken it out of the libs and now the hard part for the government is to come. The libs had the easy part of spending the stimulus.

They look like they are relieved that they’ve been put out of their misery.

Hopefully this is the last time I hear of Grace Tame. Off you go love. And go buy yourself some bras I’m sick of seeing your nipples. Probably pulled that same trick with the nipples on your maths teacher.

The biggest scam in history is making renewables the core of the environmental solutions.

There are no solutions unless population (and immigration into the West) are addressed.

The teals are a fraud.

Hopefully Labor get a majority and these horrible humans have no say in how Australia is run. I have nothing against cutting emissions, but viewed as THE solution is ludicrous. I’d love to find out what’s in it for Holmes a Court. Time will tell IMO. 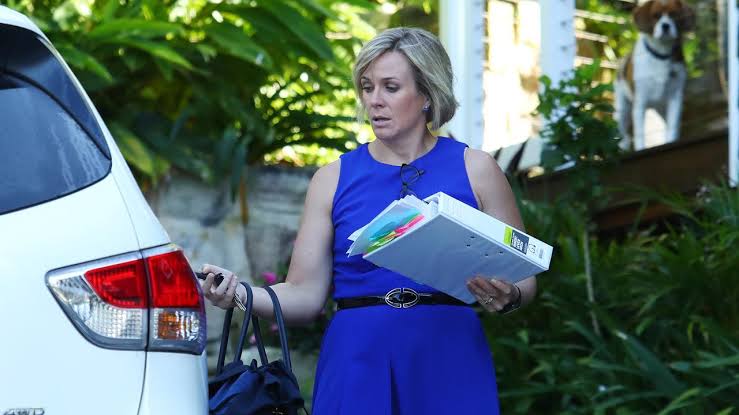 Last edited 1 month ago by Totes
0

Like the wealthy guy living in the next street to me. Owns a Tesla, but got the street trees cut down in front of his place. If he had a vagina, he would be a perfect teal candidate.

Holmes a Court has significant investments in renewables. Any reduction in consumption would be reduce the value of the investment. Yet, consumption reductions are what is needed.

yes no problem with addressing climate change we should do it i just don’t think therres FA aus can do globally at the end of the day, so its not that much of an issue.

The single biggest thing australia could do to stop co2 emissions is stop all exporting of fossil fuels.
Anything else will be a rounding error.
The question is does anyone really want to live with the consequences of that?

australia could do to stop co2 emissions is stop all exporting of fossil fuels.

The question is does anyone really want to live with the consequences of that? 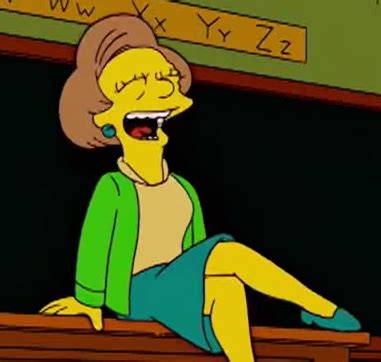 DLS, as usual, hasn’t got a clue what he’s talking about.

For Channel 9, this 6m clip is quite good.

…..”Labor got fewer votes than Shorten did last time”…

Last edited 1 month ago by Totes
0

From the numbers, Labor’s loss went to the Greens. LNP numbers dropped significantly.

The best thing about this election is rejection of both Labor and LNP. Hopefully great things come from this before we lose everything.

They will just merge. Not much difference between them anyway.

But support for Greens is a huge problem: Lydia Thorpe, Sarah Hanson Young and Mehree Faruqui said things that if they were in government would make them very dangerous people indeed. They despise Australia and think they are the ones who can save it. Teals not much better.

The Greens have gone harder to the left post Bob Brown. Maybe this will make the likes of Lydia Thorpe a liability, but seems the election said otherwise. She is an attention seeking nutter.

FWIW Somyurek is doing analysis on ALP in Victoria showing large swings away from Dan.

I noticed the same thing. Higgins and Chisholm had a sizeable swings to Labor. Many Victorian Labor held seats had swings against them and bucked the trend.

BTW, wasn’t Keneally losing Fowler the highlight of the night?

I’m glad she’s nowhere near the immigration portfolio or a job now but theyll just put some other open borders crazy there.

The interesting thing is, the multiculturalism the ALP love ended up turning on them as it inevitably does. Vietnamese voting along racial lines Good, white people doing the same equals bad you racist.

I reckon they will put Plibersek in charge of housing again. That contemptible wench know how to pump it.

Chalmers will be in charge of treasury and he is an unabashed “big Australia” fundamentalist.

I’m waiting for the Plibersek/Albo guide to increasing your portfolio during high interest rates bill.

Increasing the portfolio should be ok – it will be marginally cheaper to buy and those parliamentary salaries are pretty secure and can be leveraged right up!

It’s been pointed out his average calculation is wrong, pretty funny for a former ALP numbers man.

Looking more closely at the swings, it doesn’t look like the change in primary has affected the individual 2PP numbers. That suggests that much of the vote is flowing back to Labor probably via Greens preferences.