The narratives I’ve heard about the shortages say they are driven by:

Shortages then lead to price rises (inflation), which has also been fed by excessive government spending and central bank easing.

For mine, number 10 is the biggest worry because important decisions aren’t getting done while trivialities are getting more attention than they deserve.

I think (based on zero quantitative research) that the short term factors will have mostly faded by year end. The long term factors have been in play for a while. The ESG one is the scariest because oil investment has been too low for several years. Even if ESG stops being a thing in corporate boardrooms, renewed money flows will take time to have an impact.

Comparing the short term factors weights with the long, my hunch is that as the short term stuff expires, the economic data will begin to look better only to fall again when oil doesn’t get cheaper fast enough.

Oil and gas investment fell off a cliff at the end of 2014 and basicly stayed down for 5 years , it was just starting to recover when COVID hit, losing another year,

Oil and gas wells of course deplete over time and need cash spent to keep up the production thru varying means.

All of this was s before the Ukraine war.
Last time it took roughly 4 years to build out capacity enough to seriously bring oil prices down ( 2010-2014).
ESG wasnt a thing then, geopolitics were relatively stable. Russian supply was not a problem.
Oil and gas being priced in USD the relative strength or lack there of the AUD will have a large effect on inflation in AUS , the cost of energy flowing into everything downstream (i.e pretty much everything )

I personally don’t for one second believe the narrative about the shortages, if you look deeper into it, it really only boils down to one place and one thing that is causing most of the issues. China and their new container tax…..

This means that every empty container that returns to China costs the shipping company a whole load of cash, this means that most empty containers are clogging up shipping yards all around the world, preventing any new ones from being offloaded. This is exacerbated by the lockdowns in China and the lack of local manufacturing.

TBH I think that this is a intentional play by the CCP to fcuk the west economically seen as their virus did not succeed as well as expected.

Nah, the container tax is just an export tax. Exporters will be slugged with the price of the empty container returning and incorporate it into their export prices, which the importers will pay because the West no longer manufactures much more than bullshit, so they don’t have any choice.

My personal opinion is that China is going so hard with the lockdown for two reasons:

i) It has predominantly been punishing Shanghai, which is were a lot of Xie’s political enemies reside;

ii) More importantly, it is causing supply backlogs throughout Western Supply chains – this is important because it effects all supply chains. Even military supply chains are affected, because while components might be whole sourced locally, many of those firms that manufacture those components locally are still dependent on international supply chains.

Below is a good example:

The West is rapidly disposing of much of its military surplus in aid to the Ukraine – true much of it is obsolete, and the military industry is rubbing its hands together at the prospect of restocking…. but that will take time.

IMHO the COVID lockdowns are more about fucking with Western supply lines, as well as causing general economic disorder in the West, than eradicating COVID in China.

This would also mean that the West is less prepared for a confrontation against China should it go for Taiwan, as its surplus military supplies will have already been largely expended in the futile Russian conflict, while their supply lines remain in disarray and they are unable to restock. Will be interesting to see if there is an acceleration in this theater over the next 12 to 18 months.

Last edited 8 months ago by Stewie
2

Most people aren’t aware at how rapidly China is expanding its Blue Water navy:

They are building one nuclear aircraft carrier a year atm, and a huge amount of tonnage in other shipping:

It does seem like they are building up to take Taiwan. The economic zones formerly known collectively as ‘The West’ are too fractured to take sensible actions against it. It’s not unlike the situation pre WW2 where you had to be willfully blind to not have a strong hunch as to what Hitler was up to. Economic zones teetering on the edge of bankruptcy keep trying to kick the can down the road rather than make drastic changes for a future that can be plausibly denied, no matter how likely it appears.

you kept the sharp vision all the way to the second half of the last sentence:

Ah true that about the Fauci virus, I notice that the Biden’s seem to have a hand in that too, being that one of their companies financed EcoHealth Alliance who funded the Whuhan Institute of Virology.

Have you all noticed that 20c discount at the fuel pump has already slowly crept back to what we were originally paying 1-2months ago? Both Lib/Lab have said the cut is going after election so expect to be paying $2.50/Litre very soon… I’m still predicting a diesel shock, either severe shortages, leading to further constrained goods on shelves pushing up inflation or sharp price rise at the bowser.

I don’t disagree but think that in the medium term (around year end) prices will moderate back below $2. Then they will go up again. Longer term, the ESG crowd will need to capitulate but they won’t do so until a proper recession hits and crime rates go up as daily necessities get expensive. The 2024 US election will likely be the turning point. The next couple of years will be rough.

fuel is the biggest racket in this country, it always was

so the racket is much more developed in other places.

the cycling of fuel price is a game to extract higher profits with appearance of inexpensive fuel. a good one though.
most if the world locks prices to some extent and adjusts them weekly.

I saw petrol stations with $215.9 per litre last night. This is not far off the record highs. Pencil in a recession starting by year end.

important decisions aren’t getting done while trivialities are getting more attention than they deserve.

I would escalate this to
“important decisions aren’t getting done while trivialities are getting more attention than they require.”

in my view it is a way of distraction.
This compliments the usual dumbing down thrift
peoplewho do not think cannot rebel, they just roll up their sleeve and take the jab-de-jour

The one shortage that will be inflationary is fertiliser. China prohibited fertiliser exports last year and we are boycotting everything Russia. This will lead to inflation on the most essential item: food. Who cares about falling TV prices etc. when you can’t afford to feed yourself.

The higher energy prices almost always cause inflation and recessions. This time is no different. If energy prices stay high, we will get stagflation.

Also hydrocarbons are a key input to fertiliser making.

I’ve seen murmurs around the internet that (?Vic) government is making a new bill under agriculture legislation, to make it illegal to grow your own food. I haven’t looked into it further but absolutely fucked if true and just shows the real agenda at play here.

So team up with a neighbour and sell each other what you grow and you are now farmers, not growing your own food. 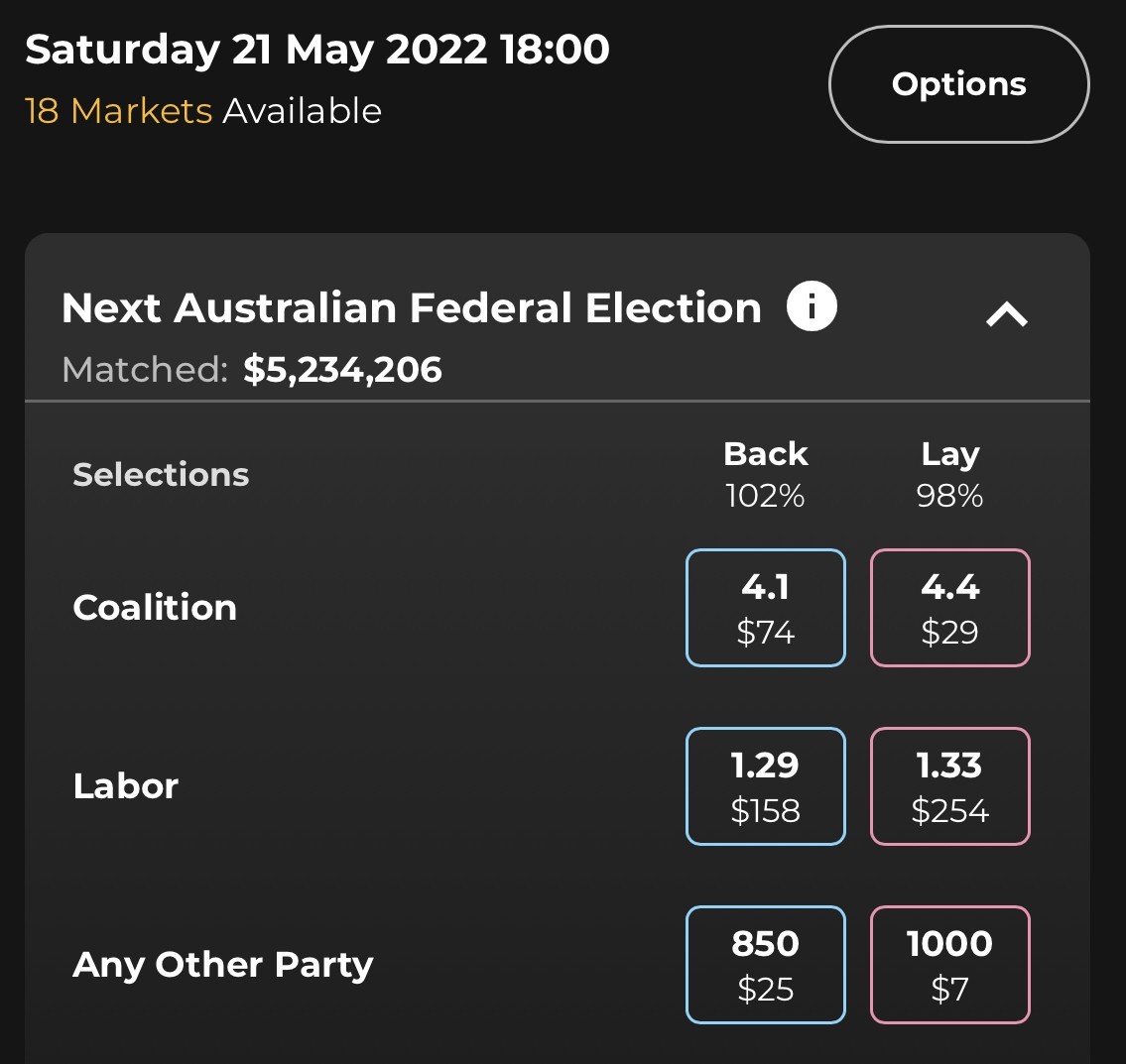 Weren’t the odds similar before the last federal election ?

and the bookies even paid out on alp bets

and we know what happened there

Presumably they set the target because they thought they could reach it. They can’t because of poor management. With prices this high, the money has to come pouring in and get this fixed ASAP. How long will it take? Dunno, but since we’re not talking about new wells or finds, it won’t be years.

Look at their actions and not their words. Saudi Arabia is trying to do a Dubai encouraging tourism, financial hub, etc. Do you think it would do this if their oil was not fast running out?

I don’t think it is easy to pump such a large increase in quantities as it used to be. Where you could are in more hostile nations and secondly, you need the investment which was pointed out by a commenter was in a five year hiatus from 2014.

Quite possibly years, Saudi was one of the very few places to keep up some investment in new fields/ stepouts since 2014, if they cant make up the short fall no one can.
The countries mentioned as not meeting there quotas are Nigeria and Angola,
I dont know what you know about Nigeria but the Oil producing regions are extremely volatile and nothing is fast or easy there.
Angola is more srable (by west african standards) however its mostly deep water, so expensive and long lead times. If there not pumping it they probably do require some new wells at least.