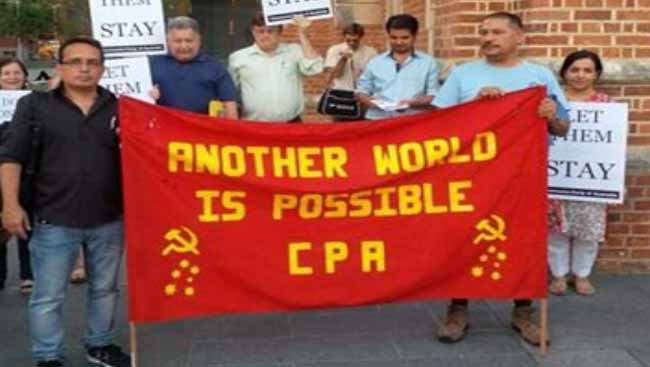 Communists throughout Melbourne have celebrated the introduction of legislation on public displays of the swastika throughout the state.

The Victorian Bolshevik Association hailed the move with tributes to Karl Marx, Leon Trotsky, Stalin and Mao at their headquarters in Caufield. Greens leader Adam Bandt was also in attendance.

“This is a real win for Victoria and a real acknowledgement of who are the undisputed champions of government sanctioned murder,” VBA President Ari Kolotevsky said.

“Those who control the past control the present and it’s a real step in the right direction of progress by banning an ancient Hindu symbol that was used in Europe for 12 years, because .38% of the Australian population claim they are offended.”

“We’re on the verge of another Holodomor and global communism anyway, so this is prescient legislation.”

The ABC and SBS will be airing special tributes to communist massacres worldwide this weekend in response.

This is not satire. This is RealNews ™!

The communists are right.

If you’ve actually read this legislative proposal, there are exemptions for Hindus and Buddhists. Despite the fact the swastika is thousands of years old and found across many European and white cultures.

Swastika’s are counterproductive to the right wing narrative. The mainstream population have been psy-oped into seeing it as worse than a Pentagram, just like they have accepted the 450,000, 1.2million, 3.5million, holy number of 6million (besides, no one is allowed to revise the number now, apart from all their earlier revisions!) But back to the Swastika – arguing for it is just wasted energy.

Frankly I see them as counterproductive, and usually suspect anyone I see carrying one to be a Fed.

Last edited 8 months ago by Stewie
0

I would say that it’s a bit delusional to point to Hindu and similar uses of the swastika symbol either to argue that it’s inoffensive altogether or to conclude that rules that ban it are anti-white.

the swastika is offensive in the west – regardless of what a billion Hindus think.
the German nazis were a bunch of terrible criminals and would such be even if they killed zero Jews. And, in modern consciousness, the recent nazi use of the swastika practically supersedes the previous historical uses.

Imagine you went around insisting on calling all service staff (in restaurants, hotels, taxis) “shitnigger”, on the basis that in your village in Western Scotland, centuries ago it was common to call the barman (and by extension, similar staff) chit-rigger, and over the years the pronounciation had drifted to shitnigger. That wouldn’t make it inoffensive.

now, I do have a concern with laws banning this kind of stuff on freedom of speech grounds, but that’s a rather different matter.

“German nazis were a bunch of terrible criminals and would such be even if they killed zero Jews.”

So the media and official historical narrative, written by the victors, tells us.

Hitler pulled Germany out of the Great Depression before any other nation, he achieved full employment and ended the Culture War in Germany that denigrated German culture as bourgeois decadence while promoting LGBT as an aspirational lifestyle as best represented by the Weimar Republic. He also had over 100,000 Jews fight for him and Germany in WW2 as actual frontline soldiers.

The media also like to say that he was an incurable racist, who for example when Jesse Owens won the 100m sprint, became incised and stormed out of the stadium…. in fact that never happened.

He both congratulated Owens (not at the stadium), provided Owens with an autographed medallion celebrating his victory AND shook hands with him congratulating him at a ceremony afterwards…. in fact the only leader who refused to congratulate Jesse Owens and shake his hand, was the US president Franklin D Roosevelt, who had all the US Olympic team winners, except the black sportsmen, to the White House to celebrate their Olympic triumph.

Hitler undoubtedly contributed greatly to the commencement of one of the bloodiest conflicts ever in human history, and his desire to deport Jews who refused to embrace the German identity over their Weimar Republic adoption of MultiCult (mainly virulently ethnocentric Ashkenazi Jews from Eastern Europe), was undoubtedly criminal by todays standards where you can’t deport any problematic immigrant group.

Everything else is imho shrouded in the fog of war and the posturing’s of the victors to justify their own crimes against humanity…. History is written by the victor.

But back to the swastika, it is a pointless, counterproductive waste of effort to die on a hill defending it.

Last edited 8 months ago by Stewie
0

there is no more communism per-se as an ideology, it us just a tool in the hands of the reset mob. in fact, it was always a tool.