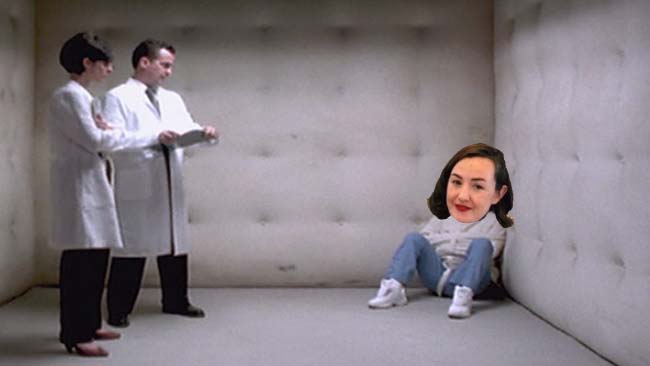 Daniel Andrews’ Chief of Staff Jessie McCrone has been committed for psychiatric assessment, after claiming thousands of protestors in Melbourne on Saturday was ‘a QAnon insurrectionist army.’

The Twitter account manager and generally patronising Andrews’ spin doctor checked into a clinic early on Sunday afternoon and will remain there for an unspecified time period. It is believed that a trending Twitter hashtag acted as a trigger which drove McCrone over the edge, after 48 hours claiming to see ‘far right QAnon extremists everywhere.’

‘I’d like to confirm that Miss McCrone is at this facility for an unspecified period of time and would like her privacy respected,” Dr Nick Quackson said.

“Miss McCrone was in the fetal position when we found her and was complaining QAnon members were ‘out to get her.’ We’ve sedated her and kept her away from Twitter and The Age.”

Daniel Andrews did not respond to requests for comment but is believed to contacting Raf Epstein as a permanent replacement.

is that really prguys identity?

it’s pretty amazing that Dan’s office feels the need to AstroTurf a fringe website like MB, but there are A LOT of Victorians on there
hardly any on here, I guess because Victorian’s are generally fucking dickhead losers

Sweeper needs his head kicked in. Although it’s probably some camp ALP staffer. Somyurek was right about that.

Doubt it. For one, Andrew’s current COS is Lissie Ratcliff and I can remember reading somewhere that the “Department of Premier” has over 1000 employees so it really could be anyone.

Then there was this from last year, where former Greens candidate and serial whinger Osman Faruqi claimed the PRGuy17 account was being run by an ex Andrews staffer at lobbying firm Hawker Britton. Of course, there was only one ex staffer – John Paul Blandthorn, who denied it.

Anyway, I don’t really get why this “PRGuy” account attracts so much attention as it just looks like a run of the mill troll account. Only has 38k followers, which is hardly going to be world changing especially given that many are likely to be fake or abandoned. You’d also think if the government wanted to spread propaganda they’d use official accounts like the premier or CHO which have nearly 400k and 150k followers respectively.

Most punchable person on earth

The pandemic legislation is a solution looking for a problem to solve. Victoria did far worse than other states in its Covid response, but no review has been done as to why. The only review thus far has been the Hotel Quarantine inquiry which was a farce and all it achieved was a disliked minister resigning and a senior public servant resigning. We are none the wiser about really went wrong. But some how it would all be much better with this legislation.

We are none the wiser about really went wrong.

what went “wrong” is that they continued to bring bods in. If they didn’t want the virus in, they should have just shut the door.

Small victory but it is good to see Dan’s PR team continue to get their arse handed to them.