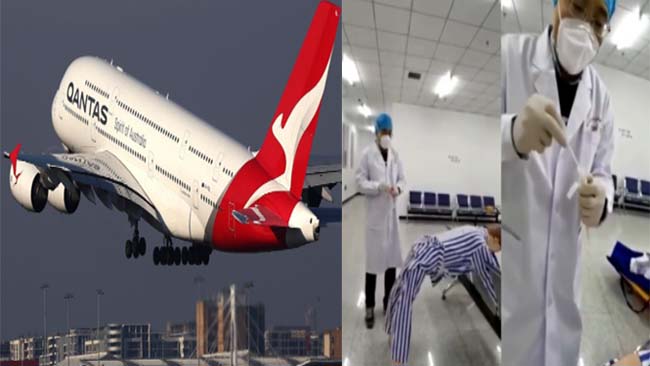 The move, instantly approved by Joyce, comes as the airline looks to commit economic suicide and become the next best shorting opportunity for savvy investors.

Joyce said flights to and from China will be the first to implement the move.

“This is all about keeping people safe in line with the Australian obsession with regulation. It’s not been an issue on the hundreds of flights we’ve made since the borders closed, but it now arbitrarily is all of a sudden,” Joyce said.

“We know we’ll always get a bailout so we don’t really give a fuck. This is EZFKA – I gave up on profitability years ago. This time it’s Qantas jamming it right up the taxpayer’s arse, literally.”

Maybe he thinks we like it because he does?

T, a link for you today. It would explain why employers are forcing vaccination of their staff.

So what happens when a vaxed person catches whuflu from another vaxed person, which is the most likely case as the vaxed numbers are so high and the un-vaxed are likely to be at home anyway if they are sick.

It is about the financial liability. Insurance companies would be charging a fortune or refusing to insure employers for workers compensation of unvaccinated staff. Can’t do much about vaccinated staff still getting sick.

Seems like negative cov test (for everyone) is the only way to prevent infections at work.

but all this is nonsense anyway – nobody ever got sued for flu or cold or fungal infection in the workplace. So just fad bullshit that will soon fade away.

the more real risk would seem to be liability for vaccine injuries – and that’s some very long-tail things you’re dealing with there, for workers in their 20s and 30s.

Vaccine injuries will be hidden and obfuscated till there is a class action, but then it will be the taxpayer picking up the tab seen as Pfizler etc. have no liability thanks for the governments smart negotiations.

Milking the system is the EZFKA way. I’d bet that the prospect of lifetime Worker’s compo would be enough to make a few Covid deniers suddenly turn into true believers.

The vaccine injury thing is going to be haunting our society for the lifetimes of those who got jabbed.

So the whole issue may have disappeared entirely, along with the victims, in 5 years or so, then. 😳

Actually, I think that’s unlikely, but I do think that long term health damage from the mRNA vaccines is very likely for a significant percentage of the population.

I wonder how the small hatters will cope, given their high Vax rates.

As a special offer, Joyce will be doing the swabbing himself for the elites.

Will they provide an Australian flag for him to wipe-off with after the procedure?

Why would you fly Cuntarse anyway, shit service fcuk all legroom, there are far better airlines anyway

The little Irish packer is insisting he individually inspects every bung hole. At least the ones that are clean and waxed.