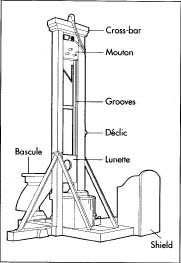 Recently EZFKA ditched a deal to buy imaginary French submarines in 2035 and instead opted to buy imaginary USA submarines in 2038. The deal has deeply hurt EZFKA-French relations and in the days since, the chagrined French have displayed much pouting. Tensions between the two countries are at their worst state since Russell Crowe sang in Les Misérables and now the French ambassador has taken his accordion and monkey home. At Sydney airport the enraged ambassador was heard yelling “I fart in your general direction. Your mother was a hamster, and your father smelt of elderberries.”

Hearing of the news, a group of Victorian small business owners have offered to buy guillotines from the French to repair international relations. A spokesperson for the small businesses said:

“Look, as we enter week 36 of short, sharp, lock-downs, many Victorian small businesses are doing it tough with some even unable to afford to buy bread. But despite this hardship, many small businesses have rallied to help the EZFKA government mend a growing problem with our French brethren. We’ve passed the hat around and have managed to raise one hundred thousand dollars. With this money we hope to buy a few guillotines and display them as pop-up art installations around the City of Melbourne.

Now we don’t want anyone to get the wrong idea about this – the guillotines are purely art and we’ll be disabling them by putting a bobby pin in the déclic or something like that. We’ll even make sure they’re covid-safe by having a basket of disinfectant wipes nearby to clean up any mess.”

Asked about the best locations for the guillotines the spokesperson said:

“Well, we’d really like to make sure they get a lot of media coverage so we’re thinking of putting one outside of Nine News in Docklands, one outside ABC Southbank and maybe one on Spring Street behind the daily press conference.

When told of the plan, Dan Andrews instantly dismissed the idea saying “That’s silly. International relations are the responsibility of the Federal Government, not some megalomaniac in Victoria. This is EZFKA not France, so we’re not renaming anything unless it’s to do with pronouns or history. Moreover, if small businesses can’t afford to buy bread then let them eat concrete!”

just check out all the videos here

after they deliberately boxed the protestors in

and not one recorded transmission from any protest so far

my blood is fucking boiling

took me a while to work out what the umbrellas are for, but finally one of the videos demonstrated how good it is at blocking the foamy pepper spray 🥰

anyway, they seem like right packs of bully bastards. They will undermine people’s faith in the police force for years or perhaps even a whole generation.

QLD cops will be happy that the spotlight will have shifted off them.

are the vicpol just the most thuggish and corrupt police force we have in aus rn? the nsw protests never get off the ground, its almost like the vicpol let these happen just so they can start shit and paint the protesters as bad.

NSWPOL are just as much Gestapo, they just prefer to strip search teenagers at train stations.

Hahaha they will get their vaccines because ultimately they are faggots.

i’d kill to see it

i’d pay to see it