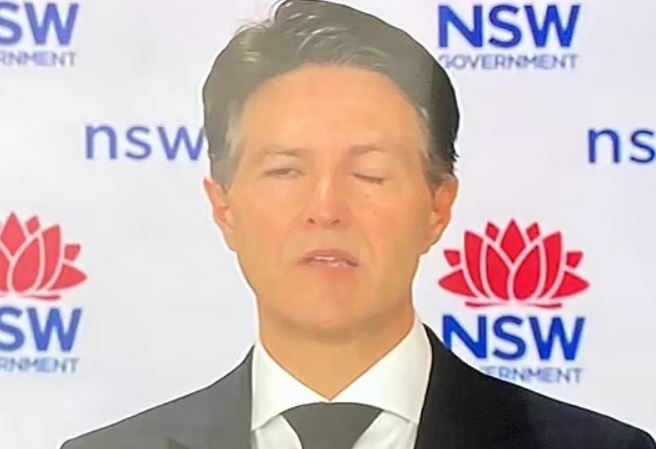 NSW MP Victor Dominello, who suffered Bells Palsy after receiving his COVID jab, will be the public face of a campaign encouraging teens to upload their adverse reactions to Tik Tok for a chance to win great prizes.

Following on from several videos being posted last week of Year 11 and Year 12 students having seizures from the jab, the NSW MP has leant his time to make compromising your health permanently ‘a bit of fun.’

“The best adverse reaction will win permanent access to the NDIS, something we usually don’t just give away,” Dominello said.

Dominello will personally greet students as they enter Qudos Bank Arena this week, with Richard Marles MP to join him later after also being diagnosed with Bell’s Palsy.

By the way Dominello says he’s only had one jab and he will have the second. Just leads me to believe that quote about some of them having Stockholm syndrome and wanting to drag others down for their poor choice, hence all the lashing out and vitriolic behavior.

who is the other MP? can you provide a link

I can’t find anything about it

Richard Marles MP. John Adams was tweeting about it.

Marles had a video up and he’s now taken it down about 2 hours after he posted it. All over telegram and Gab though.

I pointed out this coincidence to my partner, who’s just had the Pfizer jab against my best advice, and she didn’t seem impressed. Apparently everybody is having a touch of Bell’s palsy these days so it’s not worth mentioning.

Internet says trucking strike 31st onwards. Might not be a bad time to stock up on some pantry goods folks.

I want to see footage of the strike. Wonder if all the blokes will be whitie-bikie looking or “other”.

A lot of the Harpreet Singh’s won’t take the vaccine either so interesting either way.

who are the people saying this is going to happen? how many truckers are going to be involved? i’ve heard of it but haven’t seen much in the way of details and am unsure if its just a few overzealous types jumping the gun.

Couple of them came out today and said they won’t pick a date or jist drive around Canberra tooting their horns because that would be a WOFTAM.

Basically it will be done by element of surprise. A few of them blockading a couple of states freight route would cause enough havoc to send the country over the edge.

Wait and see. Not holding my breath but if it gets bad enough all bets are off.

ugh “1.2m children aged between 12-15 should be vaccinated by the end of the year. Children are increasingly falling victim […]” SMH

ugh… victim? how is it different to them getting a cold.

Full disclosure: I am vaccinated. But personal choice.

Will you get a booster shot?

that’s a good question……
I want to travel and realistically being vaxxed is a precondition for almost everywhere. it will be to get back to Australia at some point to qualify for a reduced quarantine. lol but by then yeah I probably will need a booster ffs.

Are there any links to the vids of the students having seizures?

Rest are on Telegram