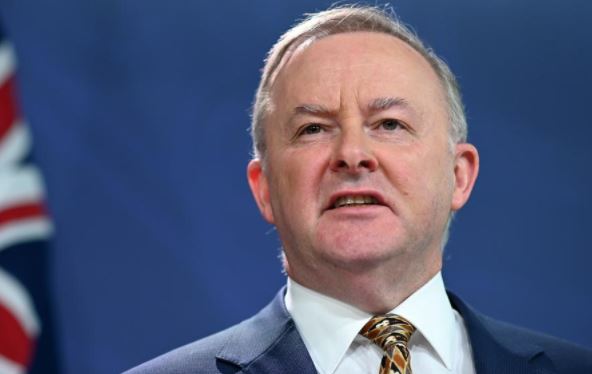 EZFKA opposition leader Anthony Albanese has demanded that an immediate airlift of 500,000 Afghanis begin from Kabul.

Albanese said it would be on the usual ALP condition of a ticket in exchange for a vote, with the carrot of full access to the usual suite of EZFKA public services and debt.

‘We’ve seen this great resettlement program work to a treat all across the EU and the rest of the five eyes countries so I think it’s unconscionable that we are not taking in greater numbers,” Albanese said.

“It’s also the only hope in hell we have of winning the dog and pony show election, that’s if we can’t get enough dead voters to vote by mail-in ballot.”

Albanese has vowed to increase the annual humanitarian intake to 500,000 a year if elected next May, in a desperate bid to keep house prices afloat.

“We have a moral obligation in this country to people who are fleeing all their obligations to their own country – they’re always the best future EZFKA citizens. As we are now not sending our own men to die for people who won’t fight for their own freedom, we need to bring them here to fight us on our own soil.”

4 deaths
All in their 80s
-2 from nursing homes
-2 who were acquired the infections in hospital where they were already inpatients, and probably headed towards death already

This is an absolute fucking farce

Desperation in my opinion.

The announcement of boosters is hilarious. Swampy and Ronin and the rest will be rolling their sleeves up don’t you worry.

I reckon in another few weeks the hospital system will start struggling though, we all knows it’s had no investment in years

Did you just pull that from your arsehole?

Admissions and ICU are stable for weeks and weeks now

This is no worse than the flu

Beyond a joke now – it can only be a conspiracy

Well, 10% of all NSW ICU beds are being taken up by covid patients now with about 80 beds in use. 6 weeks ago it was just 10 beds. Elective surgeries now being all postponed in Sydney.

That also doesn’t factor in the distribution of beds. No good having an ICU bed in Dubbo if you get covid in Liverpool.

We really need to know what % of total ICUs are in use but good luck finding that.

Overall sounds like your faith in our run down health system is better than mine. 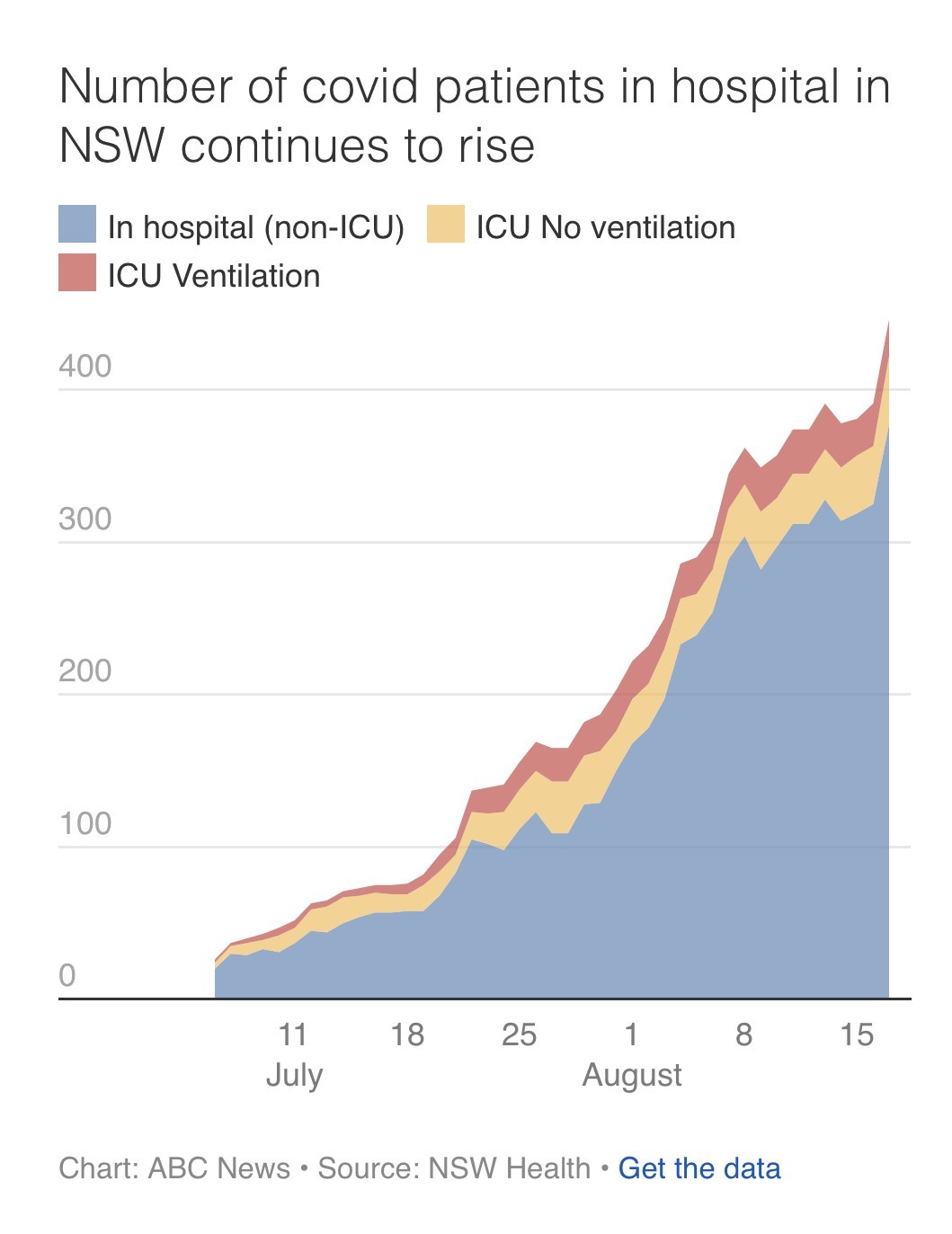 Getting closer. Need % of total across each bed type by LGA 🙂

There’s these things called ambulances, and even air ambulances that allow you to move patients between hospitals, especially patients not likely to die in the next day or 2.
Maxing a single hospital with covid patients is an inconvenience at worst.

Are they actually doing that with covid though?

Hey 90kwbeast – you raise the subject of hospitals.

on the topic of hospital systems – are there any numbers on how important/effective the hospital system is at changing the health outcomes of COVID patients?

I mean, of 1,000 people who are admitted to hospital

And if the same 1,000 people don’t get admitted

I submitted an article Peachy. I clicked the submit button but it didn’t seem to confirm if it had been submitted or anything. If the article is no good no problem I’ll try to do a better one!

Great question, no idea on the stats for that or even where you’d start to find them 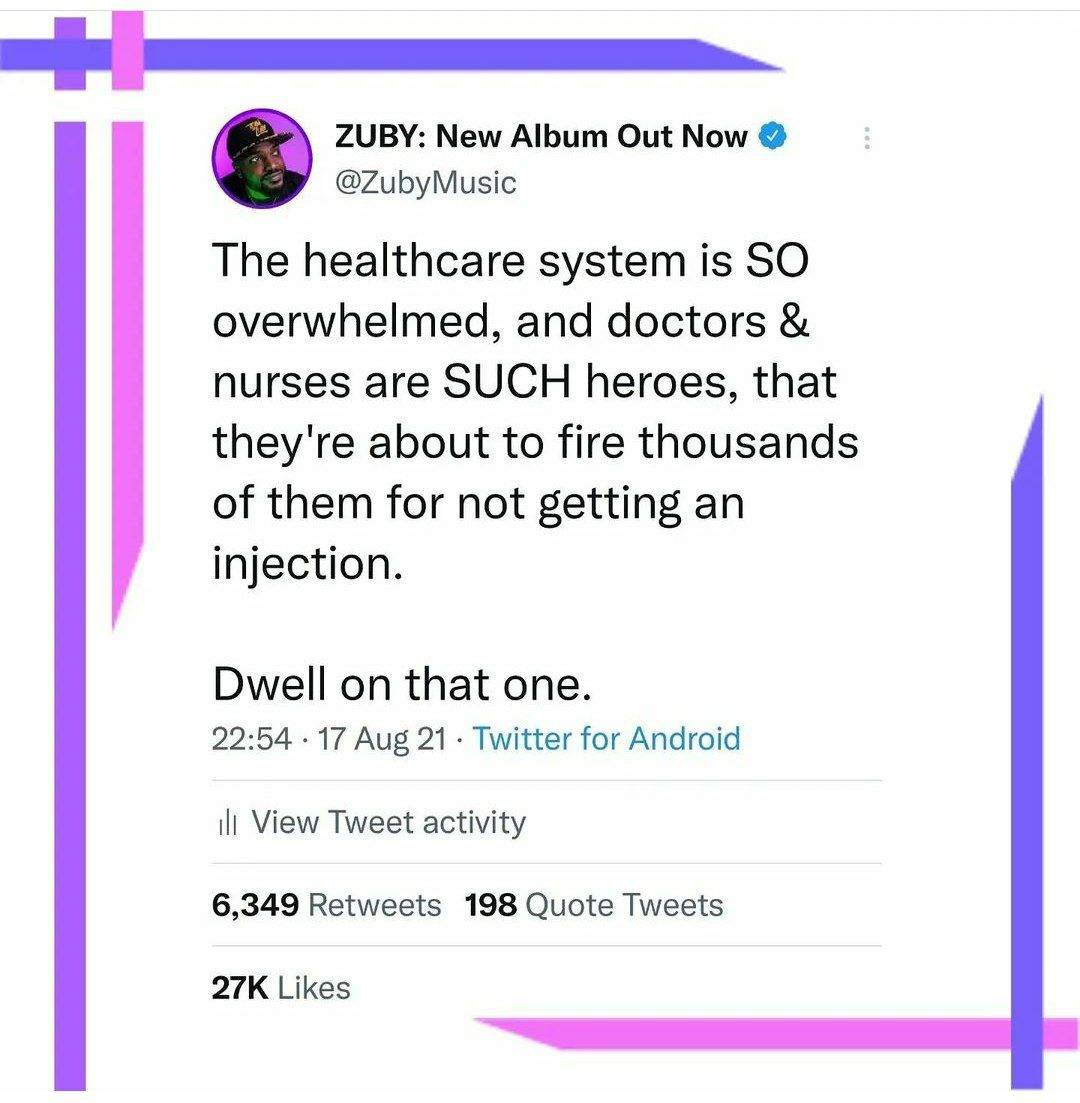 there’s a headline I saw that Chant chocked up when announcing those deaths.
they are in their 80s….. 80s….. is this a tragedy?

That last paragraph nails it.

It may be seven years before the sandgropers can go to Bali:

that’s like, a full decade, people in their early 20s will have ‘missed’ completely out and by the time they’re allowed to go there, they’ll be old, boring and have a mortgage with a fat wife and probably wont want to anymore.

that 2028 stuff is scaremongering – I shall eat my hat if it is that long.

2024 is a more plausible “bad case” scenario, (unless my zombie theories are true or there is another Really Bad Thing (RBT) that is true about COVID but is being suppressed)

yeah I think even the sandgropers will start to get pissed off… apparently the West Australian is starting to stand up to Emperor McGowan via an editorial that he has no endgame just to keep the borders sealed off forever.

That is the endgame. Keep covid at 0.
It has to be, it’s the only logical one that follows from what they are doing now.

You assume they are going to give up on containment and 0 covid.
I think that is not a certainty, especially if summer gets us back to 0 cases locally.
The thing about pushing that much fear into the community is some people will never let it go and will not accept anything less than compete irradication no matter the cost(see mb commenters)
The real question is how many?
And of course no one is going to say it’s until 2028, it will be just a few weeks, then a few more and before you can think logically we are at 2028.

I understand that line is thought mate, and it is logical.

im just not quite ready to believe that this is the “high percentage” case or the main game.

anyone been over to macro lately?

the site is so fukn dead its not funny. posts get like between 0-3 comments usually and the big ticket threads only get like 30-40 posts a day.

Have been reading it but seems many articles have the comments locked for paid subscribers only. Leith has changed his lockdown stance quite a bit now it’s affecting him more directly! And DLS I find as snarky and disagreeable as ever.

But as the last couple of years have shown, at the core both are Menshevik/NIMBY types.

Happy to issue prescriptions and advice from on up high.

Even viewing comments on most recent stories is now limited to paid subscribers only. LOL at trying to trying to force suckers to pay for “user generated content”.

has shades of the “death spiral” they like to bang on about when referencing Foxtel and health insurance power grid….

only the power grid and Foxtel and health insurers are still fine.

Maybe mb can get some:)

Hello everyone. An old timer from Macro (still there as Anon) but only just found out about this site from a comment on MB before it got moderated. Nice to see the discussions!

Glad you could join us