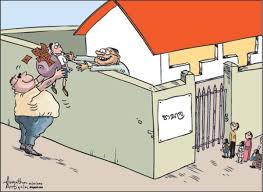 Today Scott Morrison announced that the 3,000 visas to be offered to Afghan quislings and mercenaries is just a ‘floor’ and more could be offered as reward for decades of collaborating with enemy occupiers and the corrupt puppet government to order to enrich themselves.

In an unprecedented move, Scott Morrison is also set to fast track citizenship for all 3,000 Afghan enemy collaborators since their already high level of English competency albeit American English, willingness to climb over of women and children at Kabul Airport as they tried to secure a plane seat, and willingness to sell out their religion, culture and own people displayed the necessary level of cutthroat selfishness, opportunism and rat cunning required to make a go of it in the EZFKA economy, therefore making the citizenship test redundant.

This morning Scott Morrison stated “I will make absolutely no apologies for bringing in Afghan enemy collaborators ahead of ordinary EZFKA citizens stranded overseas for 17 months since the Afghans’ preparedness to white ant and undermine a culture that goes back three millennia shows we can rely on them to white ant and undermine individual EZFKA economic units in what is an already extremely fractured economic zone along lines of race, religion, sexuality, gender, media, wealth, asset ownership, employment, politics, vaccine adoption, COVID response, etc.”

I think this article is underrated!

I do too! I submitted another one.