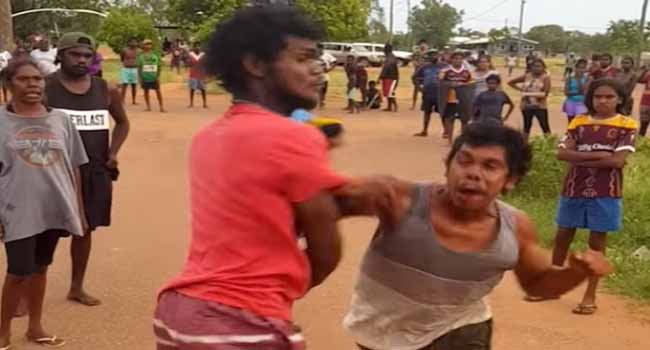 The AFL has successfully celebrated it’s annual Dreamtime round with a celebration of alcohol-fuelled violence inside and outside the grounds around EZFKA.

Traditional weapons, such as didgeridoos and star pickets, were handed out to patrons for use in altercations during games this weekend, with notable clashes at the MCG resulting in some good old fashioned clan violence to ‘really celebrate the remote community spirit.’

“It’s been another successful celebration of self-loathing white people from Melbourne virtue signalling about traditional Aboriginal culture while avoiding addressing the real issues themselves,” a spokesman for the EZFKAFL said.

“We all know that the Dreamtime round is a complete wank and festival of white guilt. We can’t for an aboriginal treaty and then it’s going to a million times worse.”

Adam Goodes was a notable absentee from the celebrations, stating he would only attend if he could punch on with a 13-year-old girl in the crowd.

How wonderful are primitive cultures though?

[in 1998] Judge Wodak said Lampton and his friend offered the victim a lift but instead pulled the car off to the side of the road and attacked her in the front passenger seat, according to the Herald Sun

say what you like, but I reckon the bloke was a fucken pioneer and trailblazer!

5 years is a fucking joke too

and im generally misogynist, but they should have just castrated him

I can’t wait for ‘African Gang’ round when Sudanese participation reaches critical mass.

Get whacked over the head outside the MCG with the ceremonial machete.

unfortunately the article doesn’t mention whether it is local eshays, or vibrants

which to me suggests its more likely the later

‘Fortunately (the Ferrari) has a little bit more power than most cars and I managed to get away,’ he said.

Shit, I hope that next time he’s also got an open road in front of him and is not stuck in traffic behind some of those delivery moped drivers…

On the money as usual

I’m an inner-city type. I drink soy milk and enjoy natural wines. While I don’t really feel ‘the self-loathing white-guilt’ mentioned in the article, I definitely am confounded by the whole post-colonial issue.

People here seem to have some pretty strong feelings about it, but does anyone have proposed solutions beyond the usual 4chan posturing?

am confounded by the whole post-colonial issue.

what is the whole “post colonial issue”, as you perceive it? And what bothers you?

How these communities can move beyond the violence, neglect and incarceration. Greater self-sovereignty? Reverting to Howard-era intervention? MPLOL?

The lefty brunch mates shrug helplessly when I ask them about this. Conservatives seem more to just talk in pejoratives without actually proposing anything sensible.

Study anthropology. Violence is a way of life in many hunter gatherer groups. To “fix” it, you need people to dissociate from their families and their land. Just like people in The West have. Then you can talk about abstract principals as the things that should really demand one’s loyalty and effort. Then you’ll get exactly what we have. Men that would rather be women, nobody who knows how to fight, families that fracture before a single generation is complete, etc.

I weirdly majored in it at ANU many moons ago. You make a good point though. But is existential malaise is really inevitable to those dissociating from their culture of violence?

But is existential malaise is really inevitable to those dissociating from their culture of violence?

well it must be inevitable… unless they adopt some sort of substitute culture.