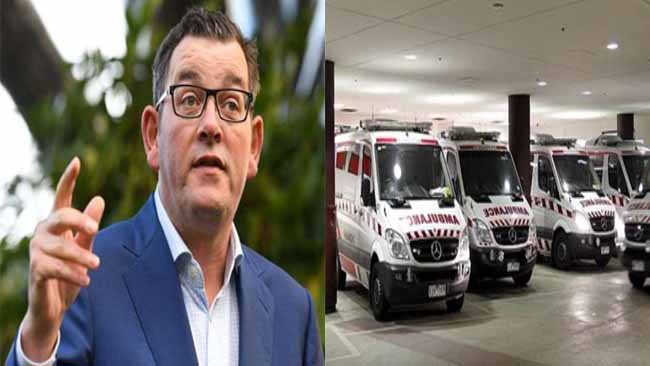 Premier Daniel Andrews has solved the state’s ambulance crises by renaming all of Ambulance Victoria.

The Premier moved quickly to rename Ambulance Victoria to Victoria Ambulance and proudly declare that there were no staff shortages.

“From today forwards, Ambulance Victoria will be known as the Victoria Ambulance and I can say confidently that there is no ambulance ramping anywhere,” Andrews said.

“It’s another stroke of genius following on from when I solved the 000 crisis by renaming ESTA. I really don’t understand why other states can’t solve these very simple issues this way.”

They don’t want to solve the ambulance or hospital crisis. They want you to suffer and die. They also want to make healthcare as uncomfortable and difficult as possible – psychological warfare in my opinion. They could easily bring back the staff terminated due to mandates but they won’t.

All intentional. Going to get worse.

somebody help me out with some background to this? Please?

This is what they are referring to.

“There has been no structural change to ESTA in 20 years.”

The review found the service had suffered over the years and noted the change would ensure its role within the emergency services sector is properly understood.

The change will also build a “more positive organisational culture right across its workforce”, the review stated.

Ha yes, they’ve certainly nailed the problem and the solution. It’s the wrong structure diagram and the organisational culture. Inhale positivity, exhale negativity. Draw some lines on the chart.

…and Graham Ashton is certainly the guy who knows how to make an organisation vigorously exhale negativity!

Don’t forget to redesign the logo and order new stationery. Some contractor mates gotta get paid too yo.

…and remember it needs to be outsourced to an indigenous owned and run company. Whether they are competent or not is a secondary concern.

Org chart reorganisation is just a smokescreen for the real issue being Melbourne’s population grew 50% in just 15 years. Covid just brought forward the collapse in the health system.

Getting cars/vans to peoples houses and back must be damn easy these days with radio and gps and computers and shit.

uber can do it no problem. Even dirty old legion cabs can do it.

what’s the difference between Uber and Victoria Ambulance?

The difference is that Uber just drops you off at a location and keeps going. An ambulance has to ensure that you are transferred from their care to appropriate hospital care. Any delay at the hospital end will mean ramping.

Is that really where the issue is? They bring the people to the hospital, but can’t offload them?

yes really.
Its a vicious positive feedback thingy too. As demand increases for ambulances the hospitals get increasingly overwhelmed meaning the ambulances become less available, meaning less ambulances available the more demand there is beyond a certain point.

how many new hospitals built in victoria in the last 20 years? How much has the population increased?

eventually the increasing population overwhelms capacity if you don’t increase it.

seems like it has absolutely fuck all to do with ambulances, then, and everything to do with hospital capacity – at least at the emergency/triage level but probably extending beyond that.

how many new hospitals built in victoria in the last 20 years? How much has the population increased?

I imagine that these numbers are at least an order of magnitude apart.

So if population increased 1m, only enough hospital capacity for 100,000 has been built (based on previous bed/bod ratio).

im going to see if I can get the numbers

Population of Melbourne has increased by around 2 million in the last 20 years. There were ramping issues in 2016 and not much changed since.

I don’t trust the hospital system here. My wife had surgery three years ago and they got basic stuff that we had to correct like the tumour is on the right side not the left. I also had a child who had to wait several hours to see a doctor in a hospital.

The health system here is the victim of mass immigration and yet the premier wants to kickstart turbocharged mass immigration. Won’t be long before the system collapses in Victoria.

This is standard EZFKA operating procedure.

AV does need a cleanout, but a logo and name change FFS…

I never understood what the issue with paramedics is. They seem to have trouble with each other.

and often people who they are tasked with helping attack them too. What’s the go?