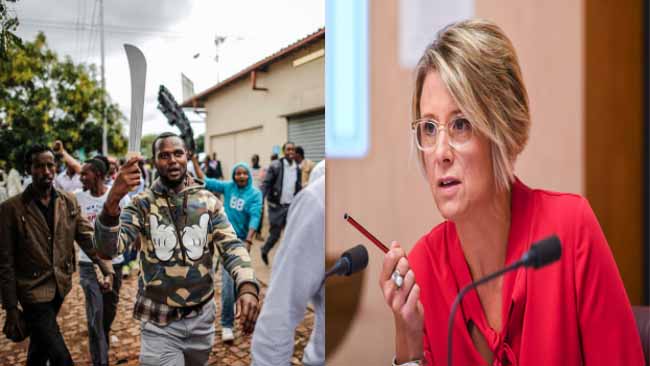 The visa, the brainchild of former immigration minister Amanda Vanstone, will see males from shitholes in Africa fast tracked into Australia. The move comes in after another gang killing in Adelaide last weekend.

“We’ve seen how effective the mass importation of Africans has been to Sweden, France and Germany and also in Melbourne,” Keneally said.

“It’s a priority to turn Australia into a third world shithole and the coalition have clearly dropped the ball on this.”

The bill has full support from the Greens who have indicated that they would advocate for free housing and community corrections orders for future offenders.

There are a couple of problems with Kennealy’s plan.

Firstly, the people on the African Gabng Visa typically won’t have the money to bid up EZFKA houses.

Secondly, and more importantly, the foreigners who DO have the money to bid up EZFKA houses (Asian, including subcontinental) are typically very racist. The presence of African Gang Visa holders would really dissuade them from buying local property.

Nothing wrong with her plan Peachy. You are falling into the trap that quality (high amount of cash) is the most important factor rather than quantity. If you import enough of them even if 20 live in a 2 bedroom apartment you will engineer low vacancy rates which will drive up rental yields and price.

Secondly our cities are segregated with moneyed living in totally different areas to the non moneyed. This will basically have no impact on purchasing decisions.

I’ll take that one step further and say that basically no one wants to live next door to them, so prices get driven down to a suitable purchase point for developers to buy the block of departing neighbours and voila, gentrification.

Yes, but to address Peachy’s point, they will live in Dandenong, SW Sydney, Inala etc. The new EZFKA units with money usually want to buy in Glen Waverley, North Shore, Sunnybank, etc. which is well away from them. EZFKA will just keep doing what it’s doing until you import so many that at some stage they will end up being neighbours.

The solution to African Immigration is to build African housing next to each and every politician and their children’s homes, and a block of African Housing commission homes next to every property developers estate.

That they miss out on the benefits of African enrichment is one of the biggest travesties of our societies today.

Amanda Vanstone should be deported to Sudan.

That and half of Fitzroy and Northcote.

Amanda Vanstone could eradicate African hunger for a week as they feasted on the giant whale.

Do I need to provide more examples of how long term disastrously those decisions will be on our respective societies across successive generations, in terms of creating stable, fair and safe societies, long term I struggle to think of two worse decisions in recent times.

The pursuit of ‘equity’ in a world filled with natural inequalities, destablises societies and civilizations.

Last edited 9 months ago by Stewie
0

Definitely happening. The lure of having your own personal thug army of brown shirts is impossible to resist for the leftist Karen.

Also, as a side benefit, aging Karens no longer need to book ‘girls-trips’ to Mauritius for some of the sweet sweet chocolate goodness! Double stuffed when you are feeling naughty!

EZFKA correspondents on the ground can reveal that in the coming days the ALP Senator Kristina Keneally will reveal the second part of this strategy to develop parts of the Simpson Desert to provide free public housing and associated facilities to assist the new Australian arrivals to assimilate into an Australian way of life in conditions as close to their previous lived experiences as possible. The locality of Simpson, NT has been earmarked.