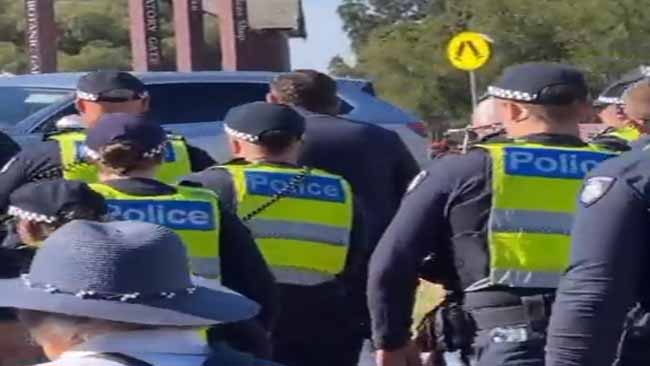 Victoria Police are reeling from staff shortages, after a report that half of the force was assigned to protecting Premier Daniel Andrews.

After video surfaced of Daniel Andrews being escorted by a huge Police presence at the ANZAC Shrine of Remembrance, Police Commissioner Shane Patton revealed that this was the main cause of staff shortages and not the vaccine mandates.

“I can confirm we have at least half of the force on close personal protection duty to the Premier on a 24/7 basis,” Patton said.

“The most popular Premier of all-time is our number one priority, so if you’re being home invaded by some imported gangs, please call Crime Stoppers and free up 000 for critical calls only relating to the Premier.”

Victoria Police said that a massive recruiting drive was underway in order to offer the same protection to Fiona Patten and Andy Meddick.

LOL I saw this. About 20 cops protecting him at the shrine and he was wearing a vest.

I doubt he’ll stay in the state once he’s done with politics because if he does hell never be able to leave his house unprotected.

So popular he has to wear a bullet proof vest.

You have to really fuck things up for yourself when you have people as apathetic as Australians riled up.

After politics he won’t be able to walk the streets again without people muttering “whatcha lookin at cunt”.

So are there pics of him wearing a vest?