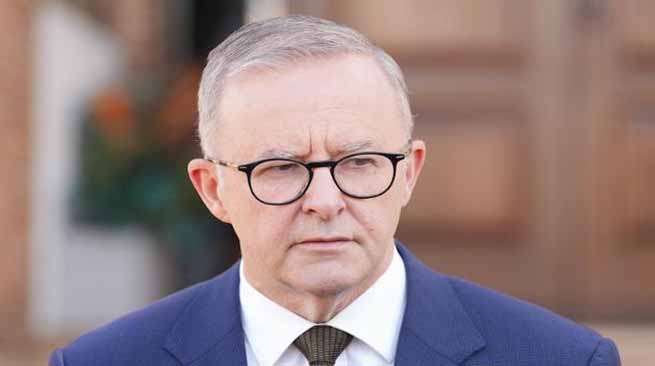 Opposition leader Anthony Albanese is in isolation tonight after testing positive for elevated levels of oestrogen.

The PM hopeful tested positive last night and will be off the campaign trail for a week, depending on “how much of a pussy he’s feeling like later in the week.”

“He’s at home resting with sensitive man boobs and a inflamed vagina. Adam Bandt is assisting him with this process as he’s a chronic sufferer of the condition,” a spokesman for the ALP said.

“He’ll be back out on the campaign trail when it’s next politically convenient.”

FFS this non birth giving person has lost lactation and have some understanding for this life trauma of which only the horror Ash Barty suffered after Pootin destroyed her chance to play the last game in BNE is greater suffering.

I just received this

Teh gates are open!

bag of salt, pinch is not enough.
not visible on Rennick Telegram but may be coming to a town near you tomorrow

This is wonderful – there is a lot to like about high prices!

they need to seize this opportunity to devalue fiat money in an enduring way. To create more room for debt expansion to run.

but to do this, they need to bite the bullet and let the broad level of wages lift significantly.

House prices have been setting the bench mark, now everything else will also double every 7 years, EZFKA for the win.

What was it like during the stagflation period of the 70s?

Honestly , is this cunt for real ?

1 week now stuck at home, and he was already doing poorly

all because this cunt couldn’t keep his nostrils shut , and just had to get swabbed

why not just take some codrals and pretend everything is alright ?
tell everyone it’s allergies

+
It’s the campaign catastrophe that no one in Labor wants to talk about publicly: what happens if Anthony Albanese catches COVID-19 during the federal election?
Prime Minister Scott Morrison tested positive for COVID at the start of March and, after a week of illness and isolation, returned ready to hand down the budget and call the election.

Federal Opposition Leader Anthony Albanese. GETTY
But Mr Albanese has not caught coronavirus, and with the election due to be called in a matter of days, the opposition leader will hit the campaign trail – where he is likely to meet scores of voters every day – at risk of contracting the virus.
Last week, manager of opposition business Tony Burke returned a positive result and went into isolation. Mr Burke works closely with the opposition leader on a range of matters, including parliamentary tactics, and the pair had spent considerable time together.
A day later, Mr Albanese’s chief advancer tested positive for the virus too. That’s despite the opposition going to much greater lengths, such as regular tests and mask wearing, than the government to protect the leader, and themselves.

Labor staff were even told to not go out to pubs or bars after the opposition leader’s budget reply speech on Thursday night, to lessen the chance of people picking up an infection.
RELATED ARTICLE

AUSTRALIA VOTES
Campaigning in the COVID-19 era splits Liberals and Labor
If, or when, Mr Albanese contracts the virus he will have to enter a week of isolation and stop campaigning when the stakes couldn’t be higher.
Labor has already issued strict protocols for journalists who will join him on the trail: to get on board the Albo bus, you have to be triple vaccinated, wear an N95 mask in most settings and take a rapid test every three days. Anyone who tests positive is off the bus. The rules for the Morrison bus are less strict – essentially, it’s follow the rules of the state or territory you’re in.
The Sun-Herald and The Sunday Age spoke to seven senior Labor MPs about what other contingencies were in place to try and manage the situation if the leader, and figurehead of the campaign, falls ill.
None would speak on the record as they were not authorised to do so, but the MPs confirmed the campaign has war-gamed what to do if Mr Albanese catches COVID.

Senior shadow ministers including Richard Marles, Penny Wong, Jim Chalmers and Mark Butler will play a more prominent role if Mr Albanese is sidelined, taking on the job of being the leading spokesperson for the party on a particular day, depending on what the issue might be.

Prime Minister Scott Morrison and Opposition Leader Anthony Albanese have different COVID-19 rules for media on their campaign buses. ALEX ELLINGHAUSEN
Mr Albanese, if he is well enough to do so, will conduct campaign events via video conference and potentially also press conferences. And it is also possible that a senior MP, perhaps Mr Marles as deputy, could take over the leader’s campaign plane and take the travelling media pack with him, too.
As one MP put it, “we have been working through every contingency for a while now, like we did for budget week”.
“Morrison has had it [COVID] but Albo hasn’t, so it’s another wild card in the campaign for us.”

With the Prime Minister lagging behind the opposition leader in all the opinion polls, every possible advantage – such as Mr Albanese being unable to campaign for a week – will be welcomed by Mr Morrison.
For Labor and its leader, COVID-19 is yet another risk to manage during the campaign.

Ps – what about this

“Morrison has had it [COVID] but Albo hasn’t, so it’s another wild card in the campaign for us.”

have they forgotten about the risk of catching Covid again and again…and the resulting “need” to keep “vaccinating” and “boosting” people who have recovered from Covid?

or is McCullough actually right about “one and done”? Hmmm?

Or maybe he just doesn’t want to win the election.

With what’s looming on the horizon, would you?

I think he does want to win. But he is a complete dope.

so is Morrison, but at least that guy has hands-on experience selling houses and stuff, so he can sell himself better

As someone else has said, we aren’t voting for Albo were voting for Plibersek in 3 months time.

Knives will be well and truly out.

If Labor wins the election, he is set to become the next federal treasurer. So who is Jim Chalmers?

Shadow Treasurer Jim Chalmers decided it would be premature to stand for the Labor leadership after Bill Shorten’s 2019 election defeat. However, he is likely to be a serious candidate if Anthony Albanese loses the 2022 election. At the least, Chalmers has positioned himself to be a very capable senior minister in an Albanese government.

I don’t think that Plibersek would have a trouble-free run at the leadership, win or lose.

Chalmers is another fucking union hack that never had a real job.

That and absolutely no personality

I’d prefer a union hack to an Emily’s lister. I will never forgive Labor’s women for changing the definition of family violence to include claims of threats unbacked back any evidence.

True, mate of mine personally really fucked up by that caper.

Charmers is a big-Australia booster through and through.

No leader (current or potential) of the Libs/Lab/Greens will advocate for anything other than mass immigration. Remember KRudd and his dream of a big Australia and he was replaced with someone whose actions were different from her words, so the migrants kept coming.

Not being able to speak in public will probably help his chances of winning.

“the emergence of a group of smart, articulate, female independent candidates, who want real action on climate change, renewable energy, electric cars and an end to dishonest politics, can be appealing.”

Not a thing matters unless mass immigration, and global population is addressed. Fuck this country’s dumb.

Last edited 9 months ago by Totes
2

Of course they are smart, they are convincing the plebs that massively subsidising their $60k+ Teslas will save the world.

You are right Totes, most of the things they advocate are feel good measures and will make little difference to the climate change.