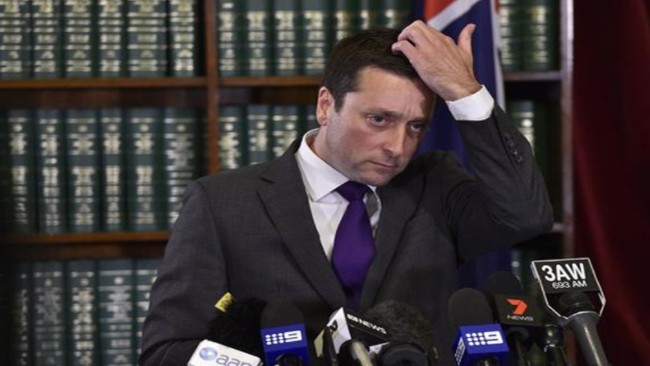 So, with the 2022 Victorian State Election upon us in a few months time, here comes the latest brain fade from a so-called conservative government:

“Victoria’s Liberal opposition has shifted its stance on climate change, saying it now supports a net-zero emissions target by 2050 and will take up the fight to the Andrews government on its environmental credentials.

The opposition’s new environment and climate change spokesman, James Newbury, said the Liberals would push for ambitious policies, signalling his party’s intention to modernise and reflect the concerns of Victorians.

“We will not be touching the legislated target.”

Mr Newbury expressed admiration for NSW Liberal Treasurer and former environment minister Matt Kean, who adopted aggressive climate change targets, including a 50 per cent emissions reduction by 2030, and said his state could phase out coal-fired power by that year.”

First of all, I’m no fan of the LNP, couldn’t care less for them. But net-fucking-zero, particularly as inflation strangles the consumer and petrol prices? Just buy an electric car! Pretty soon they’ll be supporting trans women in women’s sports in Victoria, set your watch to that and Michael O’Brien inducting Hannah Mouncey into the Victorian Sports Hall of Fame.

Essentially, they’re doing exactly what the WA Liberal Party did at the last state election under that tossbag Zac Kirkup, which resulted in a one-party state for Maogowan. Greens in blue ties are now running the LNP in Victoria and everywhere else it seems and this is a symptom generally of the conservative movement globally.

The only good thing the LNP have done in Victoria was the $10,000 cash ban from our favourite stuttering, hyperbolic economist John Adams and Robbie Barwick and the Chinese Electoral Commission Party. Other than that, they’re completely fucking useless and have no courage.

Dan Andrews has gifted every other political party in the state with scandal after scandal and yet, the Victorian LNP can’t lay a glove on them. Guy is useless, and you would have thought as much of the LNP bringing back the same bloke who lost the previous election as a step forward.

Again, it’s just a reflection of so-called conservative governments worldwide. Utterly ball-less and conceding the Overton window shift further and further left on the traditional political spectrum. Too scared about ‘muh optics’ and what people that don’t like them anyway think of them, while Rome burns.

Some people are of the opinion that Melbourne is a test city for the World Economic Forum’s Agenda 2030/Build Back Better nonsense and I’m tending to agree, given this latest stunt being indicative of a broader trend. In my opinion, they’re being told to do this. That’s on top of Slut Party MP Fiona Patten turning the city into a drugs and sex Bablyon-lite and all the rest of it.

Matthew Guy also tends to care more about other countries other than the one he’s supposed to represent:

Seriously, out of all the protests in the last two years and this is the only one you attend?

Anyways, if we get to November in one piece then Andrews will win. If not only for the fact that most people that can’t stand him have fled Victoria, leaving only his supporters with the majority. Not that voting seems to matter anymore and hasn’t for some time, and in my view is just now mainly performative bullshit to give people some comfort as civilisation declines.

And if you’re still living there, get the fuck out if you can.

Agree that Melbourne is some kind of testing ground. IMO They would have seen the levels of debt here and forward planned for a lot of it.

Plus all the Bolsheviks in Caufield and Elsternwick are on board with it.

NZ another test ground for the big agenda – in fact the WEF website even has the document showing NZ as the ‘pilot’ for AI in the future – our health dept website has all the details on how AI will be monitoring us from our homes -evem the kettle and the microwave will have monitoring devices in them which will pick up if we have any health issues eg heart beat irregularity, blood pressure etc and it will send a msg to a data centre which will trigger a virtual nurse to contact us – it’s true it’s all there! Most people have no idea just what is planned for us all!

and in my view is just now mainly performative bullshit to give people some comfort as civilisation declines.

To make my usual comment, it was always so.
The point of having representatives is they are few in number and easily captured/bought/controlled or outright installed, and that isn’t an accident.

In all fairness it’s probably a good election to lose.
Hopefully Tim and David can get some more people in.

How about Scott fucking morrison

Took him a week to show up at the floods
All he had to do was hand out some hampers, and throw a couple sandbags

All he had to do was contrast himself with albo
Who at that time was turning up at mardi gras on penny wong’s arm, wearing tight white pants

I think he dgaf

Last edited 10 months ago by Coming
0

Yeh maybe neither of them really want to win g8ven everything is legitimately (18 months) is going to shit.

My theory is that is why the current crop of pollies are so shit, even by the standard of pollies. In the last 5 years anyone with half a brain decided now was not the time to be in politics cause it’s all going to shit.
See the current ministry, lucky to have half a brain between em.

Didn’t Scomo have Covid on the 2nd, so actually had to isolate for a week.

dunno.. did he? how can I find out? lying fat cunt it is

Morrison is just a lazy cunt. If he gets kicked out, retires on a fat parliamentary pension for life.

State Liberal parties are on the nose because in many cases they’ve been overtaken by the religious right.

It’s more out in the open in NSW – you can see this with Pentecostal MP Alex Hawke’s nonattendance at branch meetings leading to a federal takeover of the NSW state party, all designed to avoid democratic plebecites introduced by Tony Abbott and ensure preselection of desired candidates. Fierravanti-Wells is definitely right wing, and even she hates Alex Hawke.

Leave Victoria I say….get out while you can before the WEF agenda has you enslaved and locked in – I’m in NZ and we have a WEF paid off HItler running our country changing laws like a madman so we have no rights whatsoever and like Victoria …hush not a word from out National conservative party – in fact they are backing Ardern’s socialist actions up! We feel we are in a fight for our lives with not one politician speaking any sense!

If voting really mattered they wouldn’t let us do it. It’s another opiate for the masses.