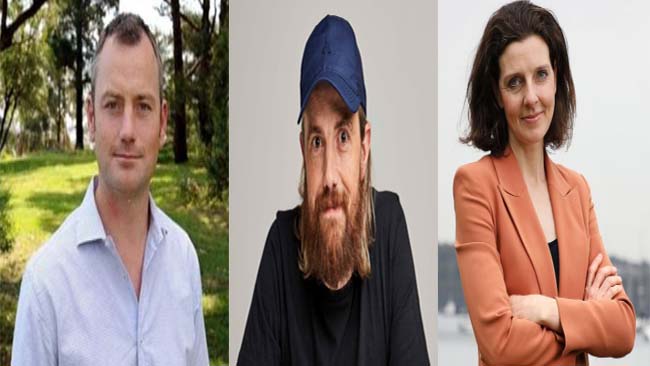 A new study has shown that all of Australia’s climate change activists, are actually just rich wankers wanting to spend public money.

The report, released today by the For Thee Not Mee Institute, showed that the majority of EZFKA’s prominent climate activists are just insufferable fuckwits that want to pass the cost of their own lives and vanity on to the working class.

‘From Mike Cannon-Brookes to Simon Holmes A Court and Allegra Spender, the research clearly shows that it’s nearly all some super wealthy fuckwits wanting to spend other people’s money to fund their own lifestyles,” Dr Richard Sloane said.

‘None of these tossers genuinely care about the environment, it’s all just about someone else paying for their Teslas. Pass the cost on – it’s the EZFKA way!”

Zali Steggall has disputed the report’s accuracy, and is meeting with corporate lobbyists as to how to get an ICE vehicle tax introduced into parliament.

Incidentally Commie-brookes is a WEF Class of 2009 stooge. On top of being an insufferable fuckwit who lectures the plebs from his 100 million Vauvluse trophy home which probably uses more power than a Sydney suburb.

If Brooke’s energy plan is so good, why wouldn’t he just use the 20 billion and start his own energy company and put AGL out of business the old fashion way via competition and make many more billions along the way.

Because like all EZFKA billionaires, he wants you to wear the risk and cost.

Brookes is sensing a change of government and will have his hand out for money.

Starting a renewable energy from scratch is hard work and you are likely to lose money. If it was the bees knees, we would have transitioned years ago.

All these people talk about energy supply, but not one of them talks about demand.

Starting a renewable energy from scratch is hard work and you are likely to lose money.

According to the hysterical preaching over at MB they claim it’s a licence to print money and has been for nearly a decade according to the cost table they constantly print with no justification whatsoever.

its amazing how completely blind to reality they manage to be!

And anyone who dares suggest it may not be correct is astroturfing. In their heads that’s the only possibility.
How does one become so self confident while always being so wrong?

it’s a licence to be regulated out of business and into bankruptcy if y’all don’t grease the right palms ….
ezfka styln

All these people talk about energy supply, but not one of them talks about demand.

And therein lies the nub of the problem.

A fly in your ointment
Reply to  plaguerat

Indeed.
Power wastage due to hubris, vanity or ignorance is the first and easy bit. But alas… life is so good when on a hot summer day AC is on Max to cope with non-existent thermal insulation

why wouldn’t he just use the 20 billion and start his own energy company and put AGL out of business the old fashion way via competition and make many more billions along the way.

Because the uncomfortable truth no one in authority wants to acknowledge is that renewables aren’t cheaper in the real world…
That’s the only thing that makes sense to me anyway.
All the big renewable projects are still being funded by governments not investors, so that should tell you how profitable they actually are.

Many of Atlassians early customers were the Wall St banks. Essentially all of them picked up Jira super early, when it was a pretty crap product.

My guess is some deals were made along the way.

But if you were WEF/Schwab, if you made big investments in Atlassian and Canva, well that is the majority of the Tech Council of Oz, which would be very useful I guess.

MCB is a meddling cunt. I hope the peasants that think he is their saviour, become enlightened and burn down all his trophy homes.

Cunt needs to be dragged out into the street and flogged.

Levelling all his trophy homes would have a massive environmental benefit

The American satirist and libertarian commentator P. J. O’Rourke, who passed away this week, once put it this way: “At the core of liberalism is the spoiled child — miserable, as all spoiled children are, unsatisfied, demanding, ill-disciplined, despotic and useless. Liberalism is a philosophy of snivelling brats.”

sums up most pollies

Do they even know how Western civilisation happened 🤔

Is Western civilisation allowed to be taught at schools?

What they did was copy a whole lot of open source tools and make them worse but sell them with “support” to the corporates.
How much that support was actually worth I have no idea but I suspect not a whole lot practically but it looked good to senior management types.

My employer bought unto the Atlassian hype. I used Jira for a couple of years and I was astonished at how little it delivered for the complexity of the product.

When I introduced JIRA at a major organisation in 2005 (my team only), it only took a few months for every other team to be impressed and switch over to it. It is far from perfect but it really had no competition.