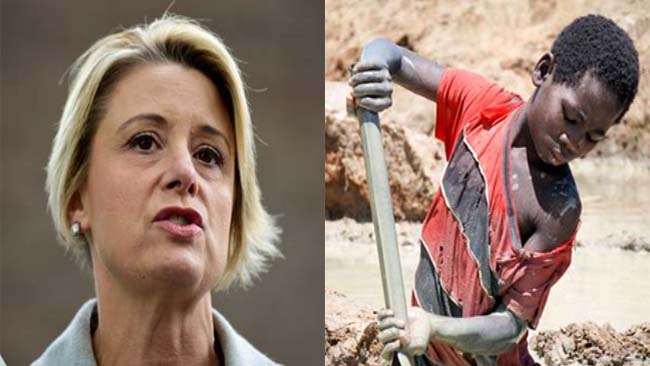 Keneally said the ALP will fly in child labour from Chinese mining operations in West Africa and remains ‘far more committed’ to the tenets of the Great Replacement, claiming a more diverse child labour force could fill skills shortages in the logistics sector.

“If the ALP is elected we will instantly introduce legislation to bring in West African child labour to assist the supply chain crisis, with a fast track to permanent residency for them and their extended families,” Keneally said.

‘This policy by Morrison is completely unethical and racist, only a Labor government will import the correct workforce to replace not only the workforce but also voters.’

Keneally will be on a tour of the Congo and Cote D’Ivoire as part of a voting recruitment drive, with a stop to Indonesia to meet ‘the Australians of the future’ before they board boats.

LOL this is exactly what she’d do. Throw in a Medicare card.

I just don’t understand why they don’t ever learn….

In the immortal words of forest gump,

stupid is as stupid does.

I notice DLS has geared up for the election and started deleting posts that point out Labor hypocrisy. The other day someone linked to site that listed politician financial interests and I pointed out that Albanese was negatively gearing four properties. Instantly deleted.

I actually quite enjoy watching Totes troll the comments section pointing out how shit the ALP are and the subsequent indignation and denial from the commentariat.

I mean he does annoyingly spam the threads but he’s right.

Totes is absolutely right. I have pointed out many times on that site that the only thing that has changed in last 30+ years is Labor party becoming a right wing party. Deregulated and privatised the banks, privatised education (HECS), privatised the pension (super), free trade agreements used to suppress wages, the list goes on.

Then I get the usual “but they are still better than LNP”. They don’t get it that they are useful idiots supporting the status quo.

Totes is kinda right but moreso not.
He is also a useful idiot supporting the status quo.

The labor party has moved the same amount as the liberals at the same time. They are virtually identical and always have been. Neither the libs or lab are the problem. They are the symptom of the failings of representative democracy.

The illusion of choice when there is no one, we need to do something totally crazy and vote independent so that no lib/lab/greens get in.

Wonder how many UAP voters have buyers remorse now Clive Palmer announced he is running?

Was always going to happen.

Totes has the same mindset of voting independent to kill off the existing parties.

Have you looked into the Liberal Democrats? Their policy statement seems quite sound.

MB is a joke. They have shifted in a big way to Labor. Especially that weasel H&H.

I’m banned now. There was a name I just saw arrive, @Turvell, a member, I reckon he’s banned too.

Going to take it to consumer affairs. Last time I did that, they said I’d breached the standards. This time I have screenshots of the abuse Gunna, H&H’s and others have given me, which sets the standards as far as I’m concerned.

Couldn’t care less about the money, I just want to wind them up. You can’t ban someone because their opinion differs can you!!!!

I won’t be subscribing again. They’ve lost the plot. I think most here at Ezfka, worked that out a long long time ago.

Now that they have their fund and also have articles in new.com.au, what is the purpose of EmBee other than getting some extra dollars from a few suckers to participate in groupthink?

There are a few good commenters still left on EmBee, but they are well and truly outnumbered by the groupthink.

This. There’s no diversity of thought left there.
They’re all disillusioned centre left, too gutless to admit their beige political viewpoint, tolerance and determination to occupy the ‘sensible centre’ has been the great enabler that has flushed western civilisation down the toilet.

Couldn’t have said it better. It’s a reflection of DLS and Becker – middle aged upper middle and upper class men who have had pretty comportable lives, unable to admit that said comfort has led the country to the predicament that it is in.

Yeah I saw your posts on the immigrant thread a few days back.

I laughed and mocked DLS saying it was his eternal wet dream that the Labor party would actually stand up for AUSTRALIANS. It lasted about 30sec… he’s such a lame pussy.

Chortle, such a butt hurt retard.

I still remember when you let them con you into buying a membership through peer pressure and dangling that carrot that paid membership garnered some kind of prestige and respect for your opinion.

Then you kept carrying on about others like me being allowed to shoot down your dumb shit arguments without being paid up members showing how much you believed in that carrot of prestige membership you dumb gullible fuck lol.

You do care about the money, because you were dumb enough to spend it thinking it would earn you some clout and then you got burned and regret it bahahahahahahahahahaha

Try and blame labor for this somehow, you’ll struggle but I’m sure you’ll find a way.

Lol this post fuckin made my weekend, you are an idiot. Cheers cunt.

I have never commented on MB as a non-member. Ever. In ten years. As usual, you’re making shit up.

You are still the same. A brainless moron.

If you want to argue. I’ll argue with you. Stick to the argument. Don’t twist what I say, and you’ve got no chance because you’ve got the IQ of a rodent.

How’s the forklift driving? Morisson wants to replace you with 16 year olds, until they can train up and collect the lunches..

What do you get out of what you do online, what I see you do here and previously MB? Do you have a point to make?

You think that’s a “gotcha”?

Never in 10 years, have I ever commented as a non-member. Ever.

What else have you got?

Are you or are you not the artist formerly known as rich42?

Sure. Show me where rich42, or totes commented as a non-member. It’s never happened.

The only time I’ve interacted with you was as totes.

One of many lol

Might have been when I was banned as rich42, and started another account as totes? Not sure, but I’ve always had membership because I wanted (and had) access to all of MB.

Over 10 years, and I’ve never made it through the year without getting banned.

I like that you and that fking idiot mig aren’t there. Maybe there is some good in them banning people!!!!

Lol keep scrambling dickhead, you’ve been exposed, wear the egg on your face and move on.

You’re a dumb fuck, accept it. Anyway man, I’m done with this shit hole for this weekend, have a good one.

Your aim was to make me look cheap and coerced into taking out membership. That didn’t happen. I’ve always been a member.

Either way. This will be the last time I reply to you.

Oh what, now they kicked out my friend mig as well?!

Long ago I reckon. I haven’t seen him there in maybe a year.

Ah well, so much the worse for them!

Has he been deleting LVO’s articles? He can’t stand Labor!

Yep, I’ve noticed, but LVO is pretty subtle about it.

Based on the last 2yrs in Vic, I will be helping out Timmy and David to get back into parliament. Really would love David to hold the balance of power in the Fed Upper House.

We must never allow feral plants or animals into our precious Aussie biosphere….but feral human beings…..??? No worries mate.