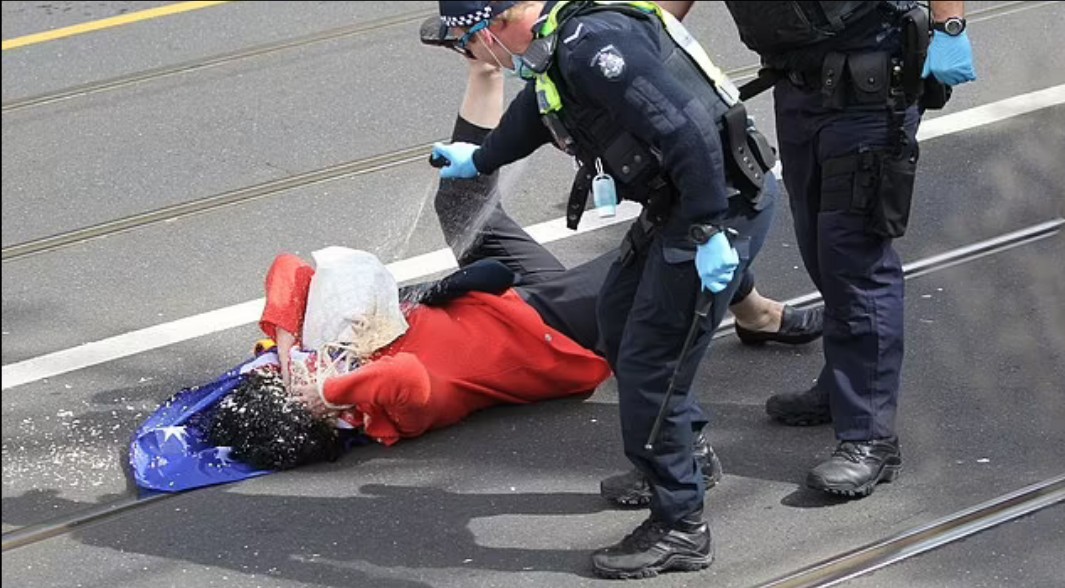 A new study has shown that Melbourne anti-lockdown protests only turned violent once Victoria Police turned up and started shooting protestors.

The study, conducted by the Rodney King Institute, found that violence only begins once Victoria Police arrive and open fire on unarmed protestors.

“The data showed that very other state was able to conduct a protest peacefully with police managing traffic and facilitating the event. In Victoria they came in trying to be hard cunts and shooting the unemployed,” Dr Mick Garrison said.

“The UN Strong Cities Network policy really was all the difference here.”

“Yeh it was a great junket and waste of tax payer money to tell us what we already know. Just wait until we roll out the predator drones next time,” Patton said.

Victoria has turned into a communist state faster than I believed possible, I still don’t understand why anyone would “stand with dictator Dan” unless you had severe mental issues.

That’s why so many complete middle class faggots here support him.

Yeah that makes sense that people would want to protect their income, those million dollar mortgages don’t pay themselves.

That and construction (10% of the workforce) which relies of government contracts or government support of the RE market.

That is because it is a mental issue, in a way.
https://youtu.be/uLDpZ8daIVM

As much as this is just an innuendo into immigration prawn, I can see this happening. Burn out at work has been recognised by UN as a workplace disease. Workplace toxicity has became norm, at least in my microcosm

Once borders are opened people will be easily replaced, so the great resignation will be a non event. Newer arrivals are more compliant anyway. I remember having an argument with a Chinese lady about mental illnesses as she was implying that we are soft.

The only people who will be resigning will be people who rode the sharemarket and house price booms. Anyone who has taken DLS’s predictions is destined to work until retirement as a bitter and twisted subscriber to EmBee.

I can only speak from my perspective and that is hugely tilted by my own experience.
I want to go from toxic environment and overworking at 0 recognition but my employer wants to have a cake and eat it and won’t let me go. There are more employees whom expressed the same. Astoundingly, I have 0 anxiety over being unemployed as it is still a better proposition to daily poison and burnout.
Anyone with spare 50 G’s and no mortgage blues can probably go a full year on cruise and contemplation. No wonder at Sydney Olympic Park waxing spot one can exclusively see demographic of those most likely to take $1mn loan with under 10% deposit for an apartment or dilapidated free-standing home.

I want to go from toxic environment and overworking at 0 recognition but my employer wants to have a cake and eat it and won’t let me go.

how does that work? Can’t you just walk out? Or are you angling for some kind of golden handshake?

Interestingggg. I have previously pondered about how interesting it would be to look at the “with mortgage” and “without mortgage” breakdown of the reluctant jab takers…. Hypothesis being that a mortgage is a very persuasive “argument”…

so, describe the demographic for those of us who haven’t been down that way?

No angle, I want redundancy as it is de-facto the case, they want to give me summary dismissal.
Whatever the case I have to move on and if they endanger my family well being, gloves go to the bin as I have nothing more to lose.

Once borders are opened people will be easily replaced, so the great resignation will be a non event. Newer arrivals are more compliant anyway.

yasss! And the quick replacement of those who do go will be a good lesson for those that remain that they are all a hair away from being replaced by a new arrival (and defaulting on that mortgage). Yasss!

I doubt one can replace all the vacancies that easy. I found it impossible to find a hard working non-bludger in a decade behind me. They come, they go, by the time you train one he’s gone and then the next round. too many people want t work just enough and not a millimetre more.

Why should anyone work for free?

A fly in your ointment
Reply to  robert2013

More work = more money- resulted in nothing.
Not free

In the IT world in the last decade or 2 they’ve worked out those new arrivals aren’t always that great at actually replacing someone effectively.

In the IT world in the last decade or 2 they’ve worked out those new arrivals aren’t always that great at actually replacing someone effectively.

Hasn’t exactly stopped the behaviour, has it?

She’s right about mental illnesses. I look down on the mentally ill as basically just weak.

There are people who are genuinely bi-polar or schizo and need to be treated for it appropriately, but most people with mental “illness” aren’t sick just weak, soft and entitled, unhappy life didn’t turn out to be as easy as they thought it would.

Doctors make diagnoses based on self reported symptoms. It’s a joke and borderline criminal how they hand out these powerful drugs to people who aren’t sick just weak.

It’s why China is eating and will continue to eat the West’s lunch.

If you can get on NDIS then you are set for life bro, heaps good income and you can chill every day.

fuck that is a shit article.

“Journalist” made up some names and some stories and added some stock photos and called it “news”. also she quotes some consultant dickhead that says 60% of people are going to change jobs and Microsoft, who take the other 40%.

The message is between the lines. It is the best and only purpose of the cesspool like news dot com.au

Oh, alright. Maybe when I read it I was too grumpy and ready to storm off in a huff and not ready to distill the subtle messaging….

No, it is a fecal mater, the article.
I am just so bent on reading between lines sometimes I miss a good article and begin to think everyone else does too.

Someone shared it on my facebook the other day. I also picked holes. Zero local research, assumes everything happening overseas will happen the exact same way here.

LSWCHP
Reply to  A fly in your ointment

I could keep working for another 5 years, but I’m pulling the pin next year.

No amenities, isolation, and fucking masks all day in the office. It’s completely alienating. Top all that off with an enormous workload and inadequate resources, along with responsibility for outcomes that I have no control over and its an easy choice.

I’m on leave at the moment, and I’m shooting, fishing, making music and generally having a great time. Today I’m going bushwalking. Woot!

I spit on the Australian flag.