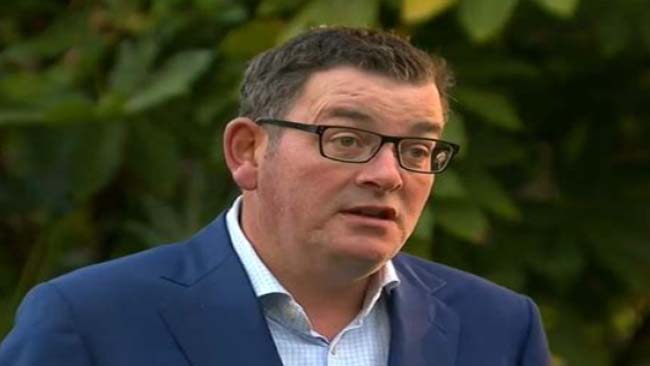 The announcement came right after IBAC proceedings had already lead to the resignation of one minister.

Andrews admitted that nervously glancing at polling data and NSW influenced his decision to open the EZFKA state earlier than planned.

“This is not about making a media distraction away from other things showing my party’s terrible behaviour. It’s completely based on the science,” Andrews said.

“I’d like to make the point again, we spent the last 18 months destroying your lives, so you should be grateful you’re getting freedoms back that aren’t ours to give back anyway.”

MSM journalists have agreed to continue not asking any real questions.

Who is that blubbering toad?

Crazy the language they are using.

I know several people that have been stood down from work and the treatment they’ve received is nuts. They are fair game because unwaxxed which means it’s ok for group pile on. They’re being treated like sub-class humans and it’s all because of the way politicians and media are talking about the unwaxxed.

This is the reason why I am so suspicious about the vaccines, if they have to force you to take a vaccine for a virus that you have to be tested to know that you have then there is something else at play.

That and the data now showing there are people dying in droves from the vaccine. To the point now where northern European states are stopping the rollout of vaccines to below 30’s and in some places to below 40’s.

“That and the data now showing there are people dying in droves from the vaccine. To the point now where northern European states are stopping the rollout of vaccines to below 30’s and in some places to below 40’s.”

I’ve not seen this, can you point me in the direction of links that I can read?
﻿

Will try to find the link, but for excess deaths it was a study in the Netherlands that was recording a excess 300 deaths a week, posted somewhere here before, and Norway and a few others were pulling the vaccines, google is hopeless trying to find it again

There is a ‘super cold’ being advertised in the UK. The vaccines likely cause ADE and these people white blood cell counts are screwed, meaning many will it survive next cold and flu season.

It’s AIDS in a syringe and no surprise considering Fauci was the fucked involved with AIDS cover ups in the 80s.

The vaccines likely cause ADE and these people white blood cell counts are screwed,

my impression of this ADE stuff is that it’s not really substantiated yet. Sure, it remains on the spectrum of possibility, but somewhere down the end.

That said I do subscribe to the law of big numbers and the law of unintended consequences, so I’d be very very surprised if some unpleasant outcomes don’t ultimately manifest for millions of people. As we get 2, 3, 8 years down the road.

“google is hopeless trying to find it again”

Well there’s your first problem. Google censors what you can and can’t see. Fuck that shit off and use something like duck duck go.

Fuck that shit off and use something like duck duck go.

even without the censorship issue, google has gone to the absolute dogs.

almost any search you do brings up:

probably the product of SEO and clickfarming industries (ie responding to incentives), but man it’s annoying.

duck duck go is better in this respect.

Is 300/week a lot for a country like Netherlands (pop. about 20m)? Or within the bounds or ordinary variation for such measures over time?

also, I’ve seen lots of comments about lockdowns etc being likely to lead to excess deaths in the future (through the mechanism of non-detection/non-diagnosis of treatable conditions, such as early stage cancer, due to hyperfocus on one virus), but I had the impression that this would take a couple of years to begin to flow through the numbers.

Thanks for finding it. Interesting reading.

The “excess” deaths is an interesting one because that actually went down in a number of countries when the flu “disappeared” because of whuflu. Now that there is a spike in non whuflu deaths above what the normal is, it makes me want to look into it more

Something scary to read

I don’t know of this site though, it could be a bit fringe, but if true then things are not looking good for a lot of folk

This bit
What we notice in the most recent week, is that the mortality is most strongly elevated among the younger age groups. Last week we had 300 more deaths than we’re supposed to have. Twenty of those are COVID-19 deaths, the rest are mysterious and unexplained. You can see a graph here, dividing the mortality rate between institutionalized people (mostly elderly nursing home residents) and the rest of the population:

The treatment of people that won’t submit to the injections by the general population, government, police, big businesses I have filed away and won’t forget.

This country has a real nasty streak where the even the general population go out of their way to f*** with peoples lives in the worst way, desperately trying to destroy everything they’ve worked for, making them social outcasts overnight.

At least blacks in South Africa had their own buses, own toilets.

Here people want me able to only purchase essentials for basic survival, strip me of any ability to earn a living hoping I end up destitute and bankrupt as some kind of lesson. I spit on the Australian flag.

My guess is that IBAC won’t really find much.

Branch stacking is not illegal. Unethical, but not illegal and most of the population doesn’t really care as whoever is chosen is going to be a party apparatchik anyway.