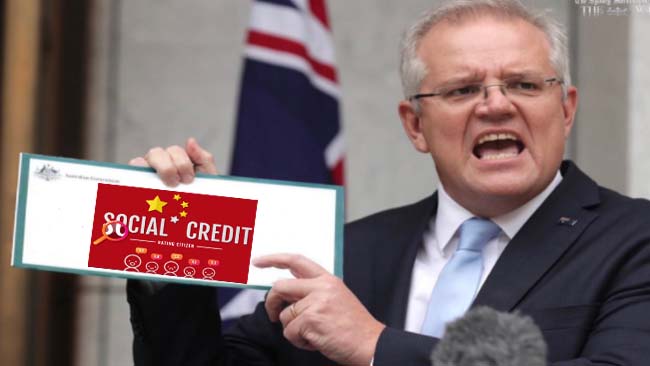 EZFKA Prime Minister Scott Morrison has unveiled a new name for the Digital Identity scheme currently being planned for the nation.

‘Digital Identity’ will now be known as “I can’t believe it’s not a social credit score” as it is rolled out across the nation.

“We had a problem with the copyright for a social credit system with China and we didn’t want to annoy them, while we’re also standing up to them at the same time,” Morrison said.

“I mean, it will only create a giant centralised information hub that can ban you from society at the push of a button for saying something we don’t like online, but remember it’s total optional.”

The consultation period is currently open, with Morrison vowing to allow Australians a brief moment of catharsis before throwing all submissions into the bin.

Mr Hawke’s blunt message comes after Victorian Premier Daniel Andrews said on Tuesday he did not think unvaccinated tennis players would get a visa to enter the country. If they did, he said they would face quarantine and vaccinated players would not.

“I don’t think an unvaccinated tennis player is going to get a visa to come into this country,” he told reporters.

“If they did get a visa, they‘d probably have to quarantine for a couple of weeks when no other players will have to.

“I don’t think any other tennis player, or golfer, or Formula One driver, will even get a visa to get here.

“The vaccine doesn’t care what your tennis ranking is or how many Grand Slams you have won. Sorry, the virus does not care.

So what’s the message here:

In general I see diatribe like this as a sign of powerlessness as the need to bring something like this to limelight is the tool of the last resort. It means that such decision would be so bad it needed peddling the public support hence this article (btw, this is the 3rd rerun of this story on cesspool aka news dot dot au). Power, when exists in cases like this, is silent and unadvertised.

The support for poor/quasi science is vanning and as it declines we see more and more stuff like this. In communism, when support for it was irreversibly decaying, the state was turning propaganda to 11, then to 12, then to 20 and then it became so irrational that not even state believed it, but they still did it. Hypocrisy was in plain sight and prevalent.

“Sorry, the virus does not care.”

well, it also seems that Novak doesn’t care about the virus.

because he’s a healthy bloke

Novak has already had Covid, so wouldn’t he have antibodies?

The thing that makes me the most sceptical about this whole vaccine mess is that fact that in spite of studies showing that having had whuflu is better than any vaccine by a factor of 13, they are not recognising natural immunity. That makes me think that there is something bigger at play here.

Yes. It seems that there is no rational reason that can be accepted for not taking the shot.

I don’t know if this is the thing that would make me the most sceptical, but it’s one of those things.

these sorts of blatantly irrational things make me concerned about the zombie scenario.

This is also interesting

People aged 40-69 have already lost 40% of their immune system capability and are losing it progressively at 3.3% to 6.4% per week…..Everybody over 30 will have lost 100% of their entire immune capability (for viruses and certain cancers) within 6 months.

I am open to the possibility that these jabs might upset your immune system somewhat, but not so completely and not so quickly. That is beyond plausible.

Depends on what the cut the vaccine with …..whuflu is known to have traits of HIV so there is nothing saying that the spike protein in the vax is not cut with that too as a “carrier” but with some unintended side effects.

“,,,,something bigger at play here.”
https://www.biometricupdate.com/202110/yoti-seeks-accreditation-as-private-digital-id-provider-from-australian-government

No doubt what’s ahead!

Former test cricketer Michael Slater openly criticises the prime minster, then gets sacked from his commentary job and has now been arrested on domestic violence charges.

If that’s not sending a message about social credit scores, I don’t know what is!

I don’t know jack about cricket, but woudlnt be surprised if the domestic violence thing is trumped up (eg he’s just called his wife a bitch, or neighbour called the cops because they “heard a commotion”).

it’s quite clear that the EZFKA government is full of cunts who rely on an army of obsequious sycophants, bootlickers, yes-men and climbers in the bureaucracy (and in the corporates) to serve them.

I think that you just described any government around the world, there is very little that differentiates a democracy from a dictatorship these days it seems.

Next up we will be the Democratic Republic of EZFKA …. like Congo you know.

He’s a nutter and druggie. Kicked off a flight for arguing and being under the influence a couple years back too.

I thought he got sacked for erratic behaviour whilst working for Channel 7. His behaviour has been erratic even during his time playing cricket.