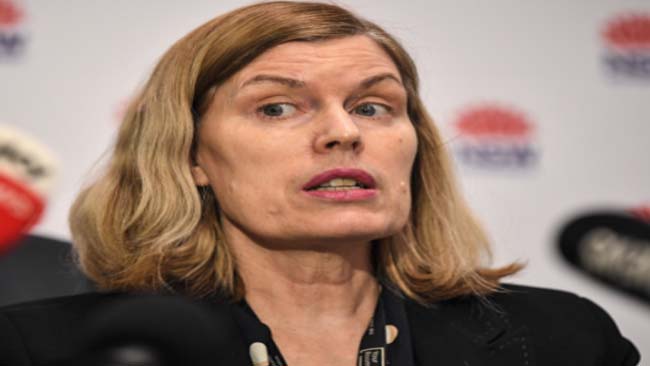 The CHO is currently under Satanic quarantine and believed to be in good spirits, sharing a brimstone rock with Jeffrey Epstein.

“Kerry really gave the game away when she muttered New World Order at the press conference a few weeks ago,” Premier Dominic Perrottet said.

“Saying she also ‘really wanted to get stuck into the children’ was probably something else she should not have said, as the child sacrifice rituals she was involved in were already difficult to hide.”

Chant is slated to return from hell next week.

she should have been a prize fighter

She now looks like Beavis, from Beavis and Butt Head,
https://www.durangoherald.com/articles/beavis-and-butt-head-staging-comeback/

Would take a punch better than Wilder

Andrews is just about fucked. Remember that Adem Somyurek guy that Andrews backstabbed last year? Well it seems he’s been biding his time for the right moment to exact revenge. He marched into IBAC HQ this morning and dumped a shitload of stuff on the commissioner’s desk. Thumb drives, discs, hard drives, a laptop and a computer. All spilling his guts about every dodgy deal, corrupt business deal, bribes, the Belt & Road details, everything. Especially his dealings with Peter Marshall the UFU secretary re all the bullshit that went on with the separation of the fire services and everything about all the promises he made in exchange for votes, all totally illegal. As soon as he heard about it Andrews had a massive meltdown this arvo and literally tried to demand that ALL members of parliament (not just Labor) have their phones handed in to his staff to be searched for contact points with IBAC and for any incriminating messages or emails.

anyone know if true? Seeing this floating around

It would be glorious if Dictator Dan was sent to prison

Someone care to provide a summary of the Somyurek backstory? Who the guy is, how he’s been slighted, etc?

He was Richo on steroids. Got caught (4 corners I think) and then thrown under one of those big ass cop vehicles along with that chick who said Vic would have another extra 4500 ICU beds within 12mths neatly 2yrs ago.

Here is the 60 minutes story:
https://youtu.be/Xm07CBiYoDM

Basically branch stacking with some misogyny as well.

Yep, branch stacking was the official reason for being thrown out of the Labor party but unofficially his real crime was being caught on tape making disparaging remarks about a couple of female Labor MP’s which sent the wokerati into meltdown.

Ugly, corrupt immigrant apparatchik who used public funds to pay for branch stacking so he could use his office for personal gain. A truly disgusting and vile thing.

I would say the worst of Australian politics, but I think it’s just what they all do.

Nothing seemed to have happened for the Red Shirts nor any other corrupt deal. All that really happens is that the paid trolls and supporters go into overdrive stating that they stand with Dan. Two weeks later the media has forgotten everything and the media is showing the latest Twitter trend.

Nothing happened last year with the health stuff ups that made people live in lockdown for months. All involved had collective amnesia and a report was released prior to Christmas.

And I have no faith in IBAC after they cleared a copper for stomping on a person’s head and putting them in a coma.

Did you all see the report about the Nipah virus that the Whuhan lab was doing gain of function research on, it is a thing of beauty, 60% mortality rate and 45 day incubation period before you show symptoms. If they had got that to Whuflu level of contagion the worlds overpopulation problem would be solved.

We need to mass produce space suites, reducing the price to affordable. Or, is it possible to live underground with 40 years of nutrition? Easier just to throw my arms in the air, and enjoy every moment.

I haven’t seen it. Link?

(as an aside, the high mortality + long incubation outcome is precisely the sort of model I described in my “zombie” scenario. Although it seems to be unlikely, there is, as yet, no guarantee that COVID doesn’t have this kind of delayed-action, with people beginning to fall over years after they’ve made a recovery)