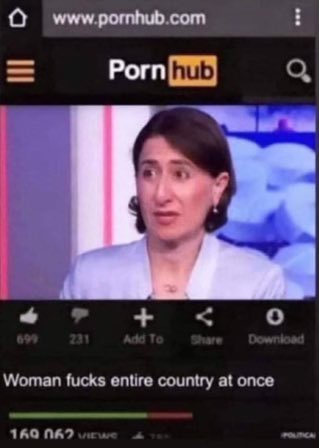 After further investigations NSW Health announced that Premier Gladys Berejiklian has developed a terminal case of corruption, which has been attributed to being directly related to multiple Maguire jabs. It was revealed that Berejiklian was receiving these regularly over the last 5 years, and due to the severe nature of the corruption allegations, is now being investigated by the Independent Commission Against Corruption (ICAC). The prognosis for Gladys was not thought to be terminal, but it appears she has succumbed to the unfortunate complication of political death. Health authorities have issued a public health warning that the exposure risk is high and for close contacts to be on the lookout for similar symptoms. However, it is feared that it may be too late for preventative measures in the political class where baseline corruption levels have already been at career threatening levels for some years.

NSW Deputy Premier John “Bruz” Barilaro made a brief media appearance to reflect on the loss of Gladys. “We’ve seen politicians survive corruption at the Federal level, but unfortunately Gladys had underlying conditions,” which could be assumed to be a reference to other problems facing the former premier like the Ruby Princess and football stadium fiasco. He advised fellow politicians to be alert but not alarmed. “We have been tracking guillotine search data on Ebay, Amazon and other online platforms. So far we’re not at Victorian levels yet so we can continue to claim we’re the Gold Standard. To stop this happening again, we may have to defund ICAC and increase funding to the Fixated Persons Unit.”

On receiving the news of Berejiklian’s demise, members of the Gladys Fan Club were in mourning, with lead cheerleader Leigh Sales quickly organising a tribute show on the ABC’s 7.30 Report and widespread calls for an end to ICAC which since its inception has now claimed three Liberal State Premiers. 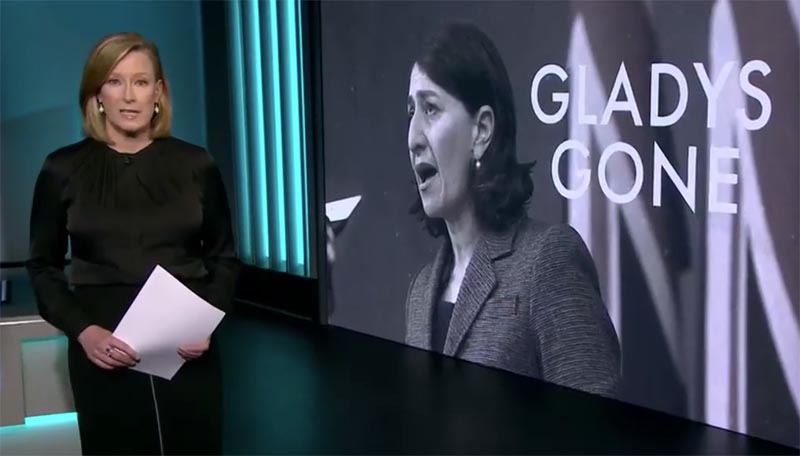 Journalists across the political spectrum were quick to blame Glady’s secret partner Daryl Maguire, despite it being in the public sphere for a year that Gladys gifted him and his electorate million dollars of dollars. Some Gladys supporters were keen to play this down as her having made bad choices, “being in love” and being taken advantage of by a man.

Sky News reporter Laura Jayes claimed people were shocked but didn’t think the media had any responsibility in terms of informing the public a year ago when the allegations first came to light. 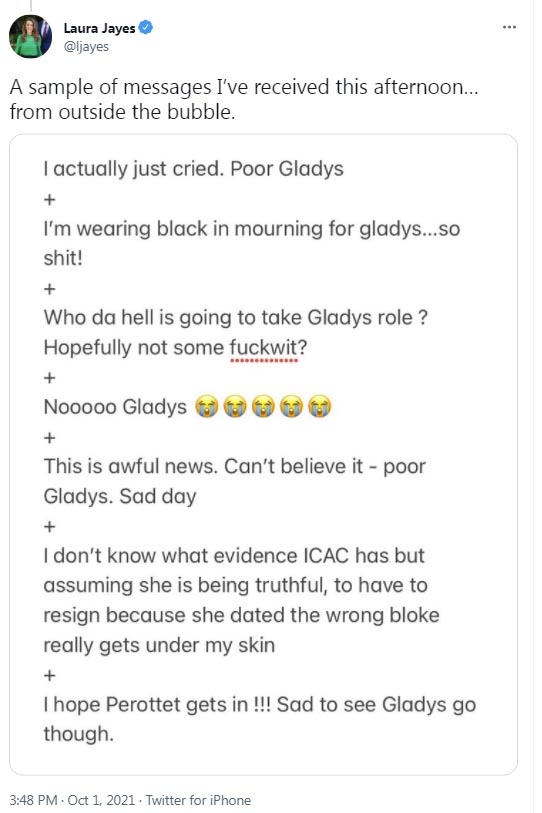 Not to be outdone, Janet Albrechtsen wrote a stirring obituary which was published in the Australian. 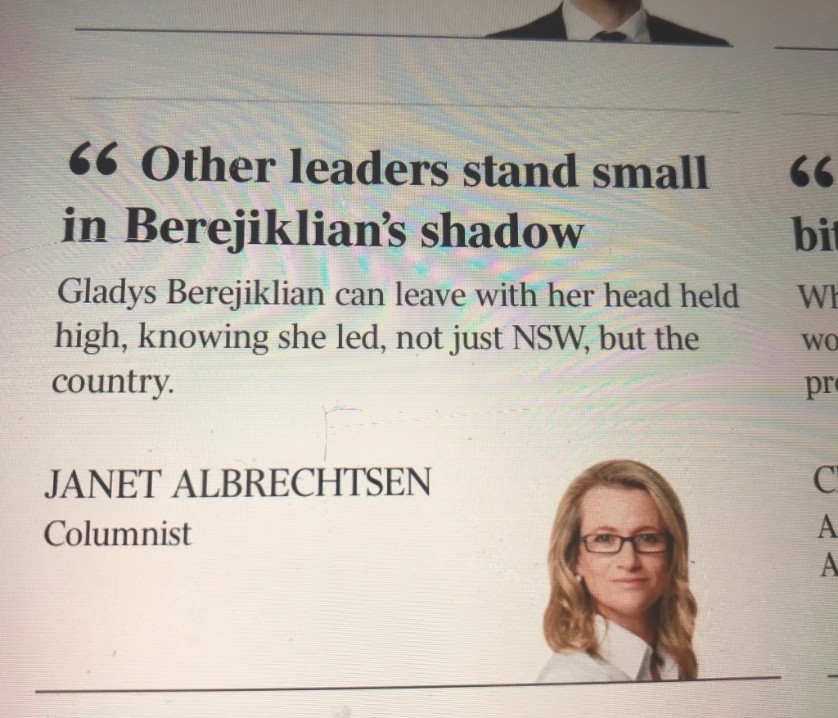 Peta Credlin was late to the party, but provided this powerful tribute in the Courier Mail. 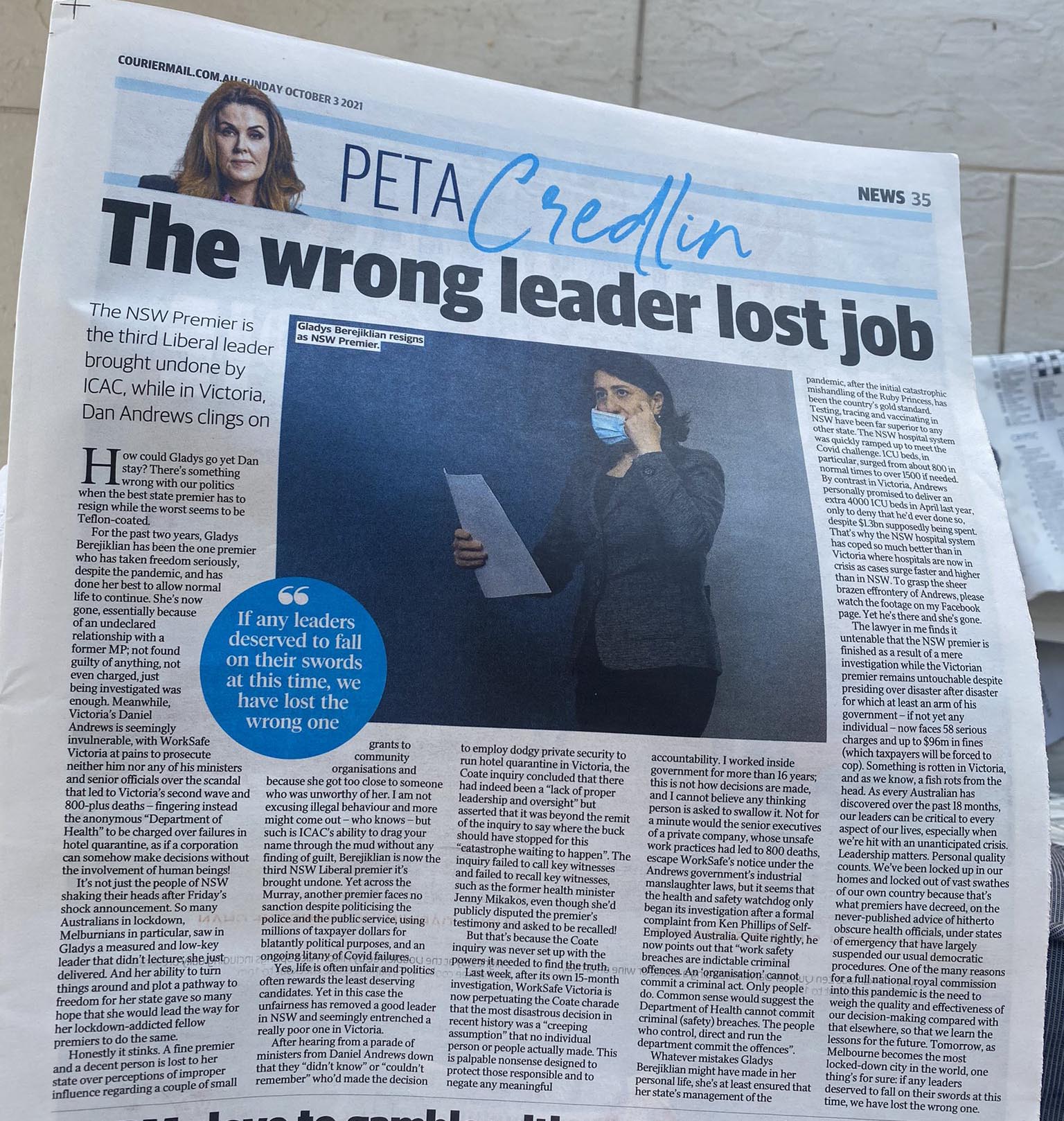 Sadly it appears that protection of the media doesn’t provide protection against corruption.

Grief was not limited to the journalist class, with the levels of adoration for Gladys reaching cult status.

Just one of many grieving Gladys supporters who have been lashing out on social media.

The AFR’s Phil Coorey who previously won plaudits for his “Gladys – The Woman who saved Australia” story was reportedly being monitored in hospital for mental health concerns. Prior to these revelations Gladys image was set to be the latest cover before being replaced by a QR code. The AFR were contacted for comment and reported that Coorey was stable after having too much egg on his face. They were also pleased to report that no editors were sacrificed to meet the publication deadline. 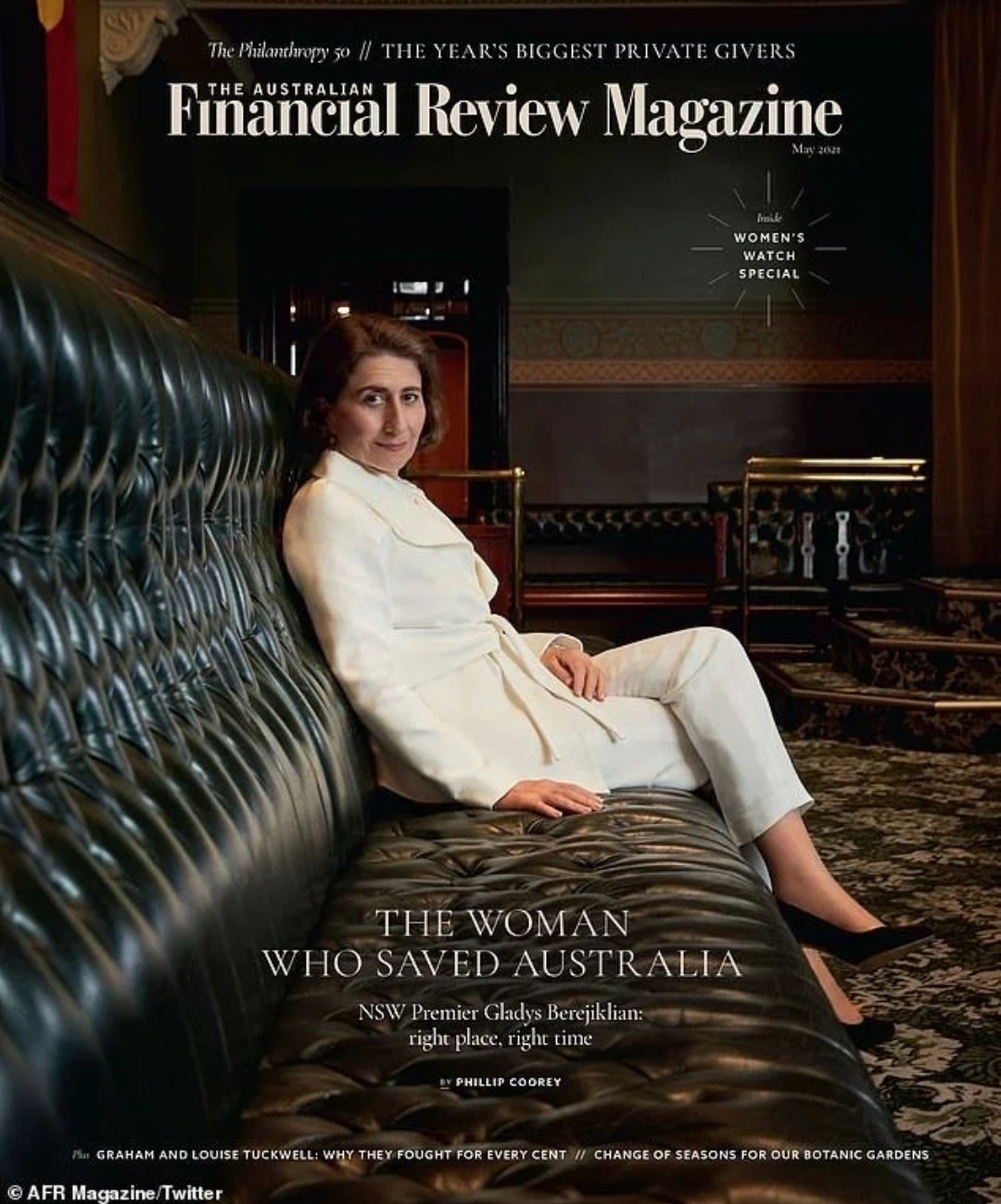 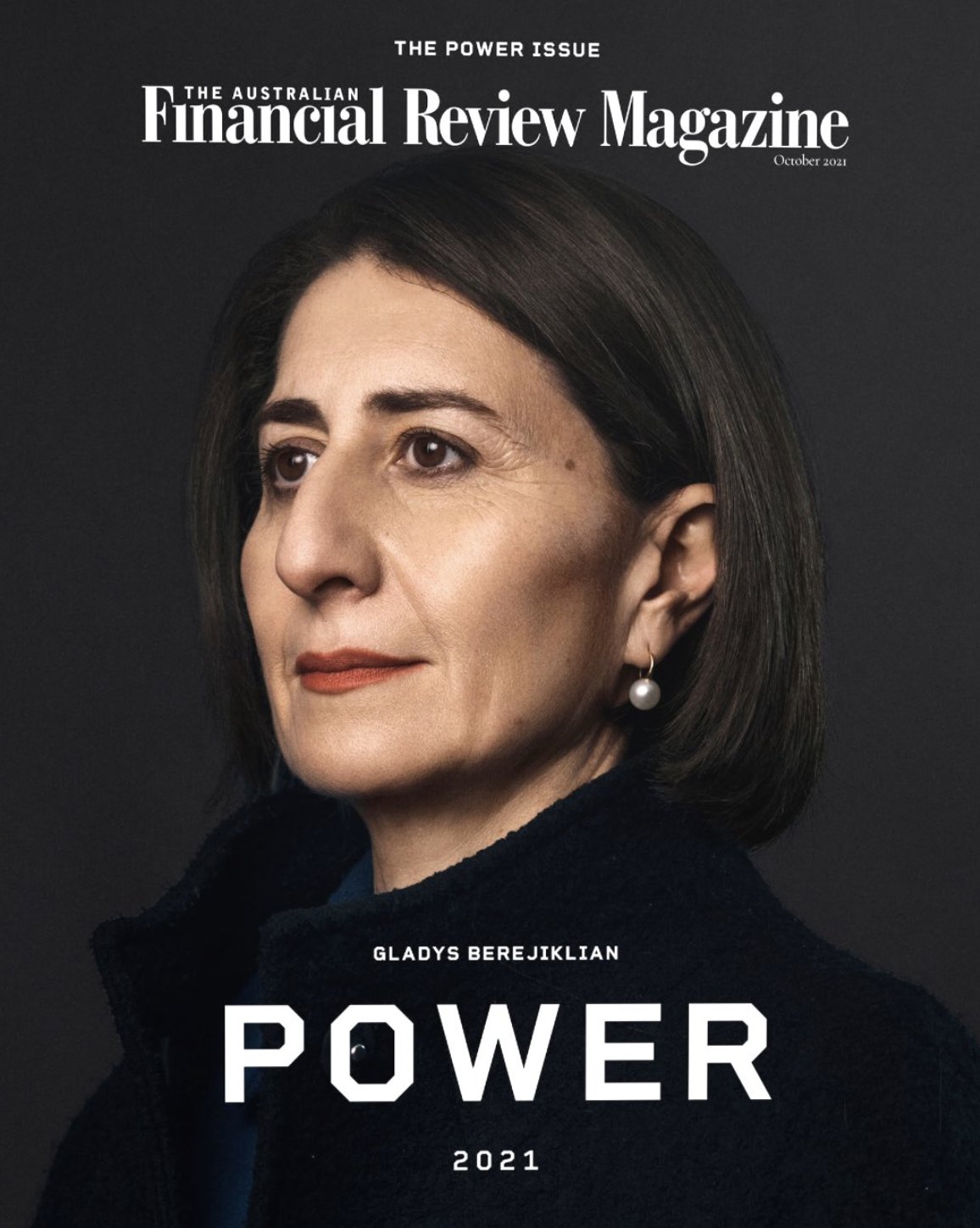 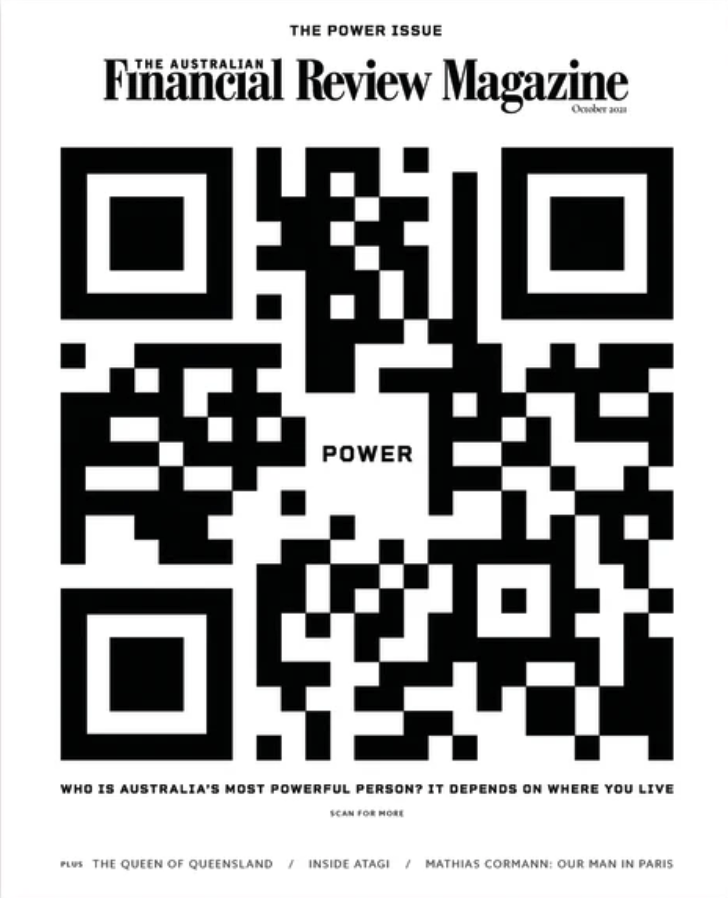 On a more positive note, Federal Labor senator Kristina Keneally felt that it wasn’t the end for Gladys. “So far it looks like it’s cost her her political career, but she could always have a go at the Federal level because recycling politicians is what we do in EZFKA.”

And barilaro resigned as well, probably due to even more corruption based on independent media reports.

It’s been a mad few days. Who would have guessed we’d see the premier and deputy resign within days of each other? For the life of me I can’t remember this sort of thing ever happening before.

Read some chatter on social media about Bruz doing a Joyce and having an affair with a staff member and the family ties getting even murkier because one of Joyce’s daughters is a said staffer with Barilaro.

At his press conference today Barilaro came out and said that he wanted to manage his defamation action against FriendlyJordies as the reason for resigning which is frankly quite pathetic. One has to assume corruption, and that Gladys was probably covering for him as he’d threatened to sit on the crossbench not too long ago. Interestingly we haven’t seen any of the Gladys cheer squad or usual media acolytes coming out in defence of Barilaro.

his press conference today Barilaro came out and said that he wanted to manage his defamation action against FriendlyJordies as the reason for resigning which is frankly quite pathetic.

I wonder if they have a blind trust ready to pick up Barilaro’s legal bills.

Or if they won’t have to bother with that pretence and go straight to
the paper bags, if he’s no longer in Parliament?

at this point barilaro can end his legal bills by simply dropping the defamation case. It is entirely up to him.
Anyone wanting to fund his own choice to pursue is frankly an idiot, which I guess doesn’t preclude someone funding it.

Yeah. Funny also that in one of the interview he referred to this as “defence”… even though clearly he is the plaintiff.

what I find funnier is the huge amounts of material from jordies claiming widespread corruption, bribery and threats is not included in the defamation case at all. Clearly Barilaro is completely OK with that, but being made fun of because he is italian is too far.

Or it’s all just spin and about controlling the narrative.

what I find funnier is the huge amounts of material from jordies claiming widespread corruption, bribery and threats is not included in the defamation case at all.

but this is clearly consistent with the “defamation” being complete bullshit, and jsut cover for a legal way to try to intimidate/silence/impoverish jordoe

I didn’t know that

The strategy clearly works. Not that I am surprised in the least. Every MSM article has said “suing comedian” and mentioned “racist”, not a single mention of corruption allegations.

https://www.youtube.com/results?search_query=friendlyjordies+barilaro+corruption
There’s some serious journalism there mixed in with humour to keep peoples attention, although some videos are 100% serious.