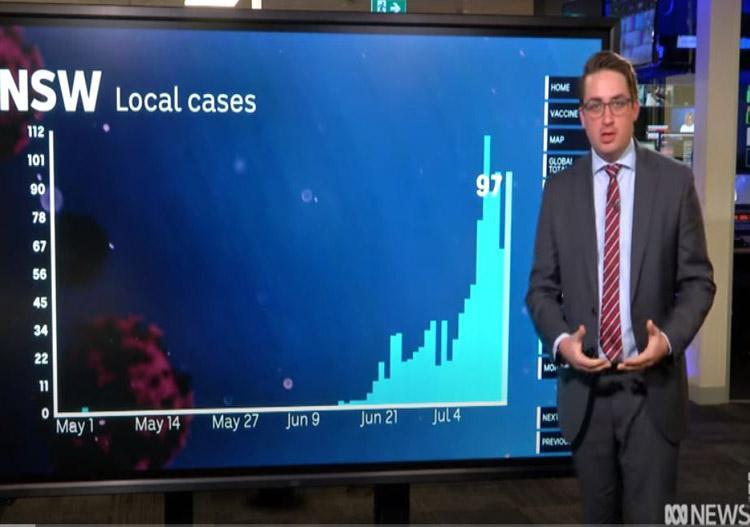 A poll has found that Australians overwhelmingly support mainstream media journalists being made permanently non-essential.

The poll, conducted by the Institute for Based Australians, found that 85% of Australians with IQ’s over 105 overwhelmingly support making mainstream media journalists permanently non-essential during and after the COVID19 pandemic.

“Many of the repsonses seemed to agree that a bunch of self-righteous dickheads being allowed to work by asking softball questions of officials day in, day out while also telling some poor bastard that his small business of 25 years that puts food on his table should close, is bullshit.”

No journalists from any major public or private network were available for comment, but many indicated they would respond with several outraged tweets later in the evening.

this bloke won’t be invited back again

The journalist pushed for a clarification of the mask rules after this.

For those to lazy to look,

Coronavirus: Gladys Berejiklian creates confusion over mask rules while not covering up when getting a coffee

No, just an inadvertent confirmation of one rule for them, and one for us.

Really is worth watching the video

you can sign up to Instagram relatively anonymously, just use your spam email . Then also use it to look at photos of knitting and cats and whatever else you’re into

what if the Mum of the removalist killed herself?

from shame at having her sons outed in the media

if she did top herself, then the media and our “leaders” are responsible

it would be so delicious

The whole thing seems dodgy. Wasn’t experiencing any symptoms but drops down dead from the disease? From what she looks like I’m suspecting pre-existing medical conditions.

And nobody in the family can speak English WTF is going on with this country?

seems like a skills shortage.
Luckily this shortage can be easily solved by importing some interpreters that speak whatever dialect this family is most comfortable with.

And those interpreters can be educated by our fine universities which will probably reduce themselves to offering basic English courses, as there is a skills shortage of people speaking English because of the supercharged immigration program of people from NESB, thus offering a path to residency!

The profits than can be extracted from that feedback loop are immense!

Importing non-English speakers who promise to train here as interpreters is better than importing fully-fledged interpreters. Creates a nice income stream for the colleges that can be borrowed against, etc.

The non-English speakers can maybe work as Uberroo drivers or removalists or builders, 60hrs per week, while maintaining an enrolment in the English language course, (until such time as they know enough English to work as interpreters).

Yes that’s the spirit! So long as every decision can somehow be aligned to supporting the population ponzi/house prices/key lobby groups that’s all that matters.

I understand more as I get older why conservative people are… Conservative. So many times well intentioned political or legislative change is corrupted over time such that one wonders if the change is worth it over a longer timeframe.

So many key reforms the past 4-5 decades have directly or indirectly created pointless industry, entrenched oligopolies or undermined the interests of the average Australian.

Peachy, I’d love to see a Collab post between yourself and Stewie in the theme of EZFKA, proposing the top 3 worst reforms that come to mind in Australia and how they backfired politically or economically.

HECS a privatisation of tertiary education and created a flood of useless degrees.

There must be many more. Have a listen to Hewson’s interview on the Jolly Swagman podcast. He talks about the good old days of Liberal and Labor constructively working together to implement policies without many arguments. They were effectively the same party.

Jon Faine is a detestable fuckwit.

the only purpose bluetick blowhard stenographers serve is to be gratuitously abused on every account ..fuck ’em

Just listen to these lying bastards. This woman in her 50s, they don’t say she died from Covid but rather report a death of someone who was a confirmed positive case. Yet the government and the media are counting it as a Covid death and using it to scare us into believing that “young” people are dying!

Just out of curiosity what is the life expectancy of a massively overweight Iraqi woman?

Last edited 11 months ago by canuckdownunder
1

Why not a suicide ? Shame related

From the reporting, it could be.
I’m sure covid doesn’t make you so sick you die before you can get to hospital.
People take up beds for weeks, not hours.

These people are off the fucking planet

DrBob127MEMBER
July 20, 2021 at 12:41 pm
It’s not a mater of “Not wanting to be outdone”
It’s a matter of possible uncontrolled community transmission.
I’m in SA and I support taking firm, decisive action ASAP.

Goldstandard1MEMBER
July 20, 2021 at 2:31 pm
Given this, and I’m the same (in Vic), this makes Gladys public enemy number one and rightly so. Unless she publically apologises and changes strategy (lockdown early on future outbreaks) borders will be closed indefinately.

Tassie TomMEMBER
July 20, 2021 at 2:09 pm
Interestingly SA has shut down elective surgery.
It will be an interesting few days to see how the doctors’ lobby’s spin this to try to get themselves back into work.
REPLY

All probably retired or close to it on safe incomes.

Average testosterone count there would be sub 100. TassieTom is the Apple isles version of swampy.

Btw I have noticed that an a ove average number of MB members live in or around Byron Bay. Which confirms the upper middle class wanker stereotype of that site.

Which confirms the upper middle class wanker stereotype of that site.

DLS is busy banning anyone that doesn’t agree with him, so guess what that ends up leaving.

How big is the upper middle class wanker population? Can it really be big enough to sustain their business model. Previously they had a more diverse audience, but banning and groupthink has basically brought them to this niche.

Given the ever increasing screaming of SUBSCRIBE! I think we know the answer…

34 year old had the Covid vaccine

who is having a whinge about not being let into Australia

It’s even worse than that. I don’t know the article has been edited but there’s now a statement from his doctor saying there is no link between his Covid and the strokes.

I’m surprised this clown didn’t blame his strokes on homophobia!