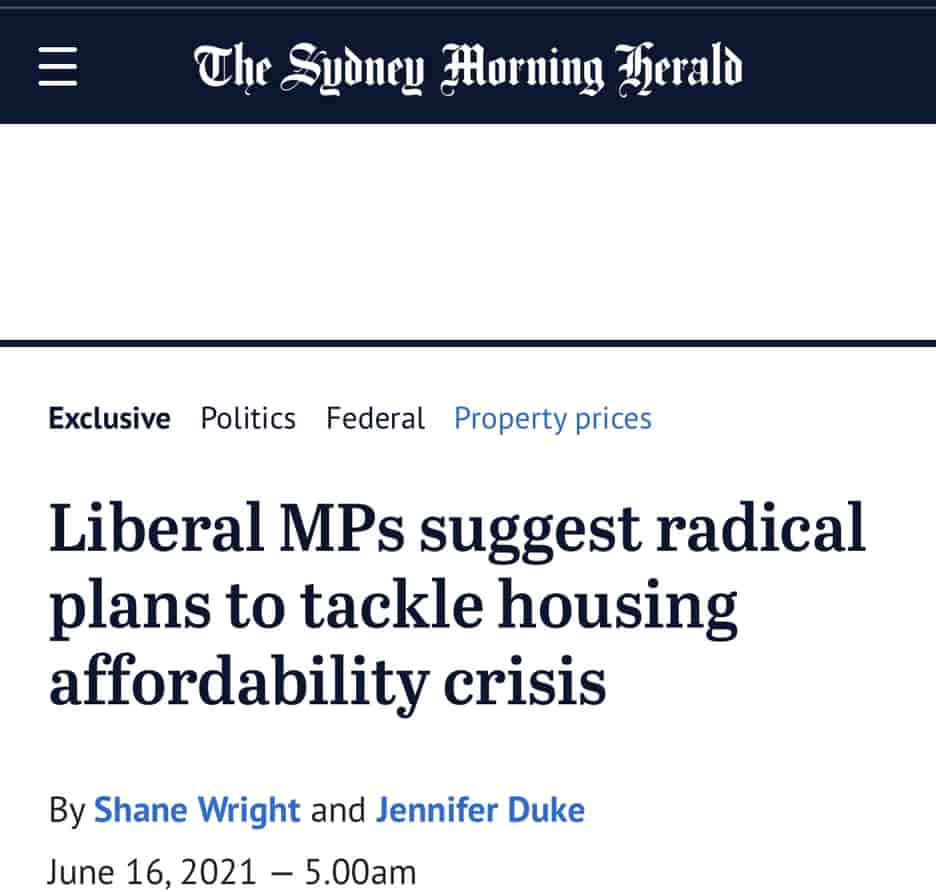 Liberal MPs are demanding the federal government consider radical plans to bring the runaway housing market under control after new figures showed the value of the nation’s homes soared by a record $450 billion in three months.

Sydney MP John Alexander said some of his own government’s policies were feeding into dysfunctional property market while Melbourne MP Tim Wilson said the tax system has to be overhauled to bring some balance back to house prices.

Some choice grabs from teh traitors:

Mr Alexander said all governments had to work together to put in place policies that would gradually bring house prices down to about three times annual household income. In parts of Sydney, they are currently at 17 times income.

…very strange. Housing affordability never means prices going down. It might mean everything else, but not prices down. I wonder if John was misquoted??

He believes an independent authority should set the proportion of losses an investor could deduct for their investment properties, based on trends in the property market.

Similar to how the Reserve Bank targets an inflation rate of between 2 and 3 per cent, this authority could be able to reduce deductibility to 50 per cent of expenses when investor activity is driving up house prices.

Willo is a bit better, with more-standard EZFKA fare:

Mr Wilson is also concerned about housing affordability, warning if people can’t afford to buy then more rising rental costs will lead to a higher need for social housing.

“There are too many factors driving money into homes to think if we just tinker with supply, prices will decline – the biggest barrier for young Australians to buy their first home is saving enough for a deposit while renting,” he said. For this reason, Mr Wilson wants first home buyers to be able to tap into their superannuation for a deposit.

good reasons from Wilson to do nothing-much on supply, and main concern is about maybe having to build social housing and the cost of it.

but this bit is strange and unexpected:

He also wants a rebasing of the tax system, with the same rate of tax applied to income also applied to capital growth. Several other Coalition MPs support his push, including Senator Gerard Rennick who wants capital gains tax charged on homes sold for more than $2 million.

this is, essentially undoing negative gearing. But in a bad way – pinging capital growth (which is high) rather than interest (which is low).

(So what’s the trick here? If it were me, I’d be smart with the commencement date. Eg – capital gains only to be counted after a particular future day (ie all-time-highs))

thankfully Labor is taking the other side, to provide EZFKA units with electoral choice…

Labor’s housing spokesman Jason Clare said the federal government could take some pressure out of the market by backing the efforts of NSW and the ACT to get rid of stamp duty.

what to make of all this? Well, my immediate guess is that LNP is preparing the ground for a stunt/pantomime ahead of the upcoming election. For example – thanking the above mentioned MPs for their input and announcing an inquiry to look at a wide range of housing affordability measures. Such inquiry to report after the election, with findings to sit on the shelf for a long time. Or forever.

“My immediate guess is that LNP is preparing the ground for a stunt/pantomime ahead of the upcoming election.”

This is the EZFKA way.

And Labor will want a Royal Commission into house prices. Either way, the report will gather thick layers of dust.

Maybe we should set up a commission first to work out what kind of commission on housing we need.

not to mention will take 6656 years to complete, meaning by the time its done everyone will have forgotten about the proposal

That is the way

I thought this was about the upcoming intergenerational report? EZFKA thinking says this is for use to open borders up again?

Both can be true. EZFKA is nothing if not adaptable Mote and bailey fallacies are part and parcel of economic reasoning within EZFKA.

The issue with supply is that we are oversupplied with housing that the population doesn’t want (small apartments wrapped in flammable cladding) and under supplied on housing that people want (three plus bedroom non apartments). The wealthiest cohorts own the latter and hence advocate the former as a solution knowing full well it won’t impact the value of their home.

“Mr Alexander said all governments had to work together to put in place policies that would gradually bring house prices down to about three times annual household income.”

When a house was a place to live in and not an object of speculation, the ‘three times annual income’ was the historical norm. Anything over was considered unaffordable 😃, imagine that.

I don’t know much about taxation around housing, but I do know one thing:
All the funny money that has been created in the last year has to be paid back.

Tax grabs are coming big time in the near future, doesn’t matter what the parties promise for the elections. How it’s going to involve housing I have no idea.

Another thing: I never liked the idea of a land tax.
Once you have paid for something it should be yours. It shouldn’t mean that the gov can come in and confiscate it because of taxes owed.

the email address I used in my profile is just a random one I picked from the internet.

I hope EZFKA or GeneratePress/WordPress is not going to send any unsolicited emails?

The email address I used in my profile is a random one i made up.

maybe someone who has used a real email address can comment?

Or do you want to change your email address?

If making one up works I will do that.

All i get is borderline spam telling me people have commented etc.
Nothing you would miss.
Might make a password reset hard though…

Glad I asked, don’t want to piss off people I don’t even know.

Just changed to made up one.

Last edited 1 year ago by Sacha
0

Not really spam and you can probably turn it off in the settings, but i don’t need 70 emails telling me someone commented on my article, or someone replied to a comment.

I checked and couldn’t find anywhere in profile/account where you can opt in/out for getting notified when getting replied to.

All I could find is the bell icon next to the ‘Post Comment’ button and that is off by default.

Maybe you can modify settings on your end so that notifications from EZFKA go to spam folder or auto delete.

Last edited 1 year ago by Sacha
0

I could, but that would require more effort than just deleting them with all the other crap i get so…

I probably only get stuff from the forum and article I author, haven’t really paid all that much attention.

Maybe I can get IT to turn that crap off? Or do some people actually use it?

I’m indifferent, leave it to others to decide.
Although it seems I’m the sucker who isn’t ANON.

you and me both lol 🙂 yeah i ignore the emails, and conveniently gmail lets me bulk delete the conversation so no harm no foul.

Have the MB deflation imaginarium dwellers published a gushing endorsement of this news report yet?

I forgot to include in the article my expectation that they would do so….

﻿You have a way with words.

We’re almost at the one year anniversary of MBs “Second in a Lifetime” sell everything call. It was such a compelling argument that I sold everything I owned and put in all in GGOV. 😅

note all solutions that emerge from this will never actually address the underlying land price, only the ability to service loans or access the funds required for the deposit

“Addressing” land price means taking something away from asset owners. And the banks that have lent into the assets.

They’re just laying the groundwork for getting another federally funded First Home Owners Boost operational again (last one lapsed IIRC). Did I imagine seeing NSW was already handing out $25k to EZFKA units located within it territory…

Yes, that could well be it. Make some noise about housing, then just wheel out the usual “solutions”.

I thought this post was missing the satire tag.

Nowadays most msm would fall within that category.