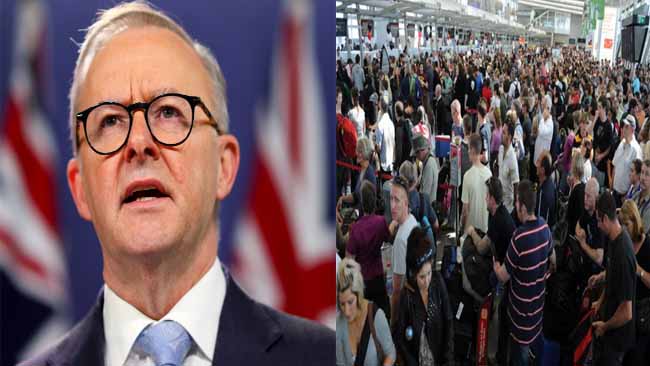 Shock of the century:

“Tens of thousands more skilled migrants will arrive in Australia from next year, as the Albanese government moves to fill chronic labour shortages by recognising trades and qualifications from more countries.

The government wants to increase the migration intake to between 180,000 and 200,000 a year, which would bring in more skilled migrants including tradies, IT specialists and aged care workers.

Skills and Training Minister Brendan O’Connor said the country also needed to better recognise existing skills and qualifications of migrants who come to Australia, which could include “bridging training” instead of forcing them to study again for years.”

I can’t wait for the Chinese built infrastructure. Oh wait.

Well, it’s explicit now so the MB crowd and all the ALP-fellaters who were taking high doses of copium thinking that things would be different on this front after the election, can now start swallowing solid shit instead.

It was never going to happen. Albo’s ‘jobs summit’ is just a fake consent manufacturing exercise for the corporate and property developer fags who want their cheap labour and debt cannon fodder asap.

Manufacturing was never returning here especially when everything is being done to push forward the green fantasy and it’s resultant insane energy prices. Australian manufacturing is coming back though, just back offshore to another country.

Get ready for the return of third worlders (read: Indians) finishing off what’s left of the Australian middle class and clawing wages all the way back down. May as well roll-out those slumlord visas: rent out six to a room and get fast-tracked PR.

The only silver lining about the COVID shutdown was the cessation, like the rest of the anglosphere, of Australia being overrun with every Gurpreet, Abdul and Xiao Wang on the planet.

And this is why house prices are not going to crash.

Now now, let’s not deny that interest rates are going to do their thing.

their thing is very unlikely to be a crash though. a10-15% correction is not a crash.

Completely agree. My wife went to an open home yesterday and dozens of people were going through. Admittedly, it was near new, but the cost of building is going up significantly, so there will be no crash. Prices may decrease some more, but with this immigration announcement, we should be looking at double digit rent increases for the next couple of years. That will put a floor under prices.

For the last two weekends have noticed a place near mine has been having an open inspection, and has had about a dozen cars outside with a line of families and couples each time.

Was walking past on one of those occasions, when the agent called out to me – it was the same guy who sold me my current place so I think he was probably more honest as he knew I wasn’t looking anymore.

Told me that things had been slowing down since the rate rises, but a lot of interested parties were looking to upgrade and get out of rent which according to his colleagues was spiked in some areas.

After I went home and checked the listing online, I noticed that the 3 comparable properties used in the price guide sold for around what I paid for last year – in some cases more for a smaller and older property. The asking price of this place was about the same, although the land size is bigger so perhaps that is where they are seeing a drop. Still, I think there has to be a lot of money in the system looking for a place to go, so I wouldn’t count property out just yet.

I am shocked that the worker’s party wants more competition to drive down wages. Next thing they’ll want to take more money from them for Super. Oh wait, that is happening too.

That party ceased to have any consideration for workers when Whitlem was kicked out. Nowadays they have exactly the same economic policies as the LNP and are only there to prevent alternatives that would support workers from forming.

I remember reading The Grapes of Wrath and Nineteen Eightyfour at high school. Never in my wildest dreams did I think I would be living through it.

did you watch the movie Matrix?