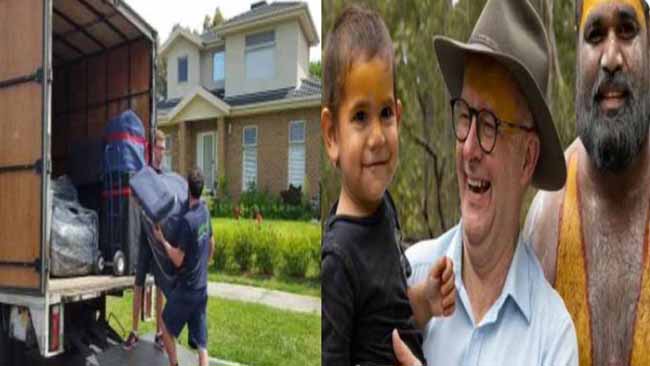 Mass evictions have commenced across Australia moments after an Indigenous Treaty was signed, deeming the entire country as stolen land.

The move came moments after the Voice to Parliament referendum passed, with the Albanese government wasting no time going after white Australians’ private property and seizing everything they could.

Australians were forced to surrender their houses immediately or face removal into the already full Mickleham and Wellcamp detention camps.

“People would accuse us of using indigenous people as a cultural battering ram against white Australia and a trojan horse to destroy rights, erase history and steal property, well they would only be partially correct,” Albanese said.

“This is about fairness and true equality in the pursuit of justice and complies with the UNDRIP treaty that we signed without putting to vote. It’s also the only way we could save the housing market.”

Albanese praised parliament for not allowing the legislation to be made public as per pre-referendum, as ‘it never would have passed without their acquiescence.’

Local Greens voter Tim, speaking from a child drag queen story time event in Fitzroy, said the voice to parliament was only about equal representation and not a slippery slope globalist power grab, revealing he also voted yes on the same sex marriage referendum.

Meanwhile, Black Rock and Vanguard have already entered into negotiations with the Albanese government about the best method to re-distribute assets, with Albanese bringing expert former ATSIC staff out of retirement for “one last grift.”

can somebody explain to me what the ‘indigenous voice’ actually is

what’s it going to do

IMO Timbo nailed it. Trojan horse for a land and power grab using indigenous as the vehicle.

It is going to be a body with all members picked by parliament(presumably, what could go wrong lol) completely undemocratically with as yet undetermined powers.
HOWEVER,
if it requires going to a referendum then it must have more powers than parliament currently does or can give out. That should really worry you.

Yep, the plan to take this to a referendum makes me rather suspicious as well. The official MSM narrative is that it’s simply a group of indigenous representatives who will report to and advise parliament on the issues affecting the indigenous population. I see this as an attempt to resurrect ATSIC (ATSIC 2.0 if you will) so get ready for billions of taxpayer dollars to be pissed up against the wall.

ATSIC didn’t need a referendum to create it.

Same thing is going on in NZ and Canada under different name. Biggest land grab of all time.

I voted against gay marriage.

Monkey pox is the funniest thing I’ve heard of in years. The self pitying videos featuring muscle bound bechancred gay chaps bemoaning their terrible fates are something to behold.

Man Gets Monkeypox- Loses Part Of His Nose
Complains About Free To Air Telly
https://www.thechronicle.com.au/lifestyle/health/so-painful-man-recalls-terrifying-monkeypox-ordeal/news-story/7cac70d5cad5ad1443f809f9c6e8be34

ROFL – wait until LSWCHP see’s the photo of his nose!

So the gay man, who has HIV and caught the disease from his gay partner (or ex now perhaps?..I’m sure a few choice words were exchanged) wants to reassure everyone that monkeypox isn’t a “gay disease” except that “I got it from my sexual partner.”

These degenerates imbeciles can deny reality all they like, but reality is reality and doesn’t change, no matter how much they deny it.

I’m know I’m a Bad Person for chortling gleefully at articles like this, but the smug and arrogant triumphalism of the homosexualists and their fucked up pride nonsense and their foul flag has really pissed me off these past few years.

Pride cometh before a fall. LoL. I hope they all continue to enjoy the results of their obsessive pleasuring.

“This is about fairness and true equality in the pursuit of justice and complies with the UNDRIP treaty that we signed without putting to vote.”

This is true – but what is not mentioned is that those European nations that immediately signed the UNDRIP Treaty then immediately passed laws in their own nations declaring that their own citizens were not indigenous to Europe, despite some of that nations existing existing in some semblance for over 1000 years.

Why? Because the UNDRIP Treaty recognises cultural flooding through mass migration as a form of genocide, which of course our hostile elites don’t want to have used against them as they flood those nations with hostile immigrant cultures.

So it begins – won’t be long until these courses are compulsory at all Universities and start to become required training courses for professional bodies.

Short term maybe but long term, universities will fade to irrelevance over the next 20 years. All the best intellectual work is being done elsewhere. Those who go to uni will be seen as foolish or second rate. All the learning can be done online already and for very little $. Nobody gives a shit about liberal arts degrees anymore since dialectic has been replaced by data (thankfully). The push back is now underway, peak uni and peak leftism is either already behind us or not far away.

We can only hope

We were half joking about this a few weeks ago.

A fly in your ointment
Reply to  Freddy

The pile of em is FAR from exhausted.