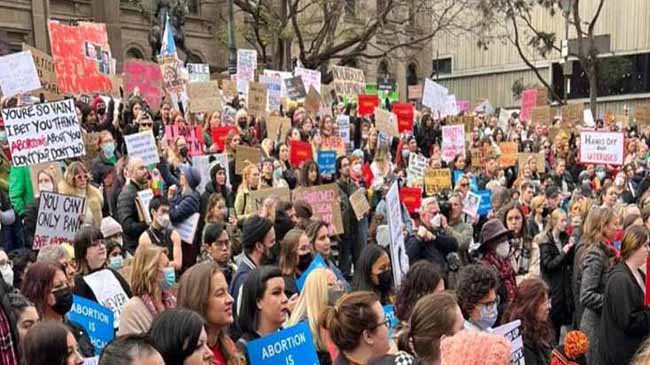 Protests across Australia have broken out in solidarity with the United States, as women seeking the right to bodily autonomy have returned to the streets after almost 2.5 years in hiding.

Capital cities across Australia saw protestors take to the streets for the right to terminate pregnancies, despite the process already legal in Australia and having no bearing on local laws.

“It’s great to see so many Australians out on the streets protesting about a domestic policy decision that they know fuck all about and won’t impact them directly,” a spokeswoman for the march said.

“It’s also great to see so many privileged, upper middle class white women who were the worst enforcers of mask and vaccine mandates the previous two years, come out and support the right to dismember fetuses they don’t want. My body my choice.”

Victorian Reason Party MLC Fiona Patten sacrificed a child to Moloch on the steps of Victorian Parliament in support of the protestors, and was looking at legislation to introduce abortion up to 28 days after birth.

the idiocy and irony of “MY body – MY choice”.
where’s the choice for the baby?

Last edited 1 month ago by Counterfiat
3

IMHO Stonetoss would have to be the most influential cartoonist/satirist around atm.

Yeah. The guy slices like a razor with a few simple lines and words.

Last edited 1 month ago by Counterfiat
0

Well this is nuts.

Here’s something I’ve been pondering with these protests some have been demanding/pressuring that men should get a vasectomy. So why isn’t there an easily available male contraceptive pill yet? We can rush thru a wax worldwide and modern medicine has made huge advances in the last 20 years. The male contraceptive is essentially just testosterone and progesterone in a pill so hardly ground breaking stuff…

I’ve often heard that men couldn’t be trusted to take it. In reality there’s no political pressure and it’s a massive gender inequality. Men are essentially relying on the woman to take it and if they don’t then they are on the hook for 18 years child support. I think if it was readily available young single men would take it in droves at least the smart ones would.

The irony of vaccinated women who think they are going to be able to carry to full term such that they need to be worried about abortion is lost on them.