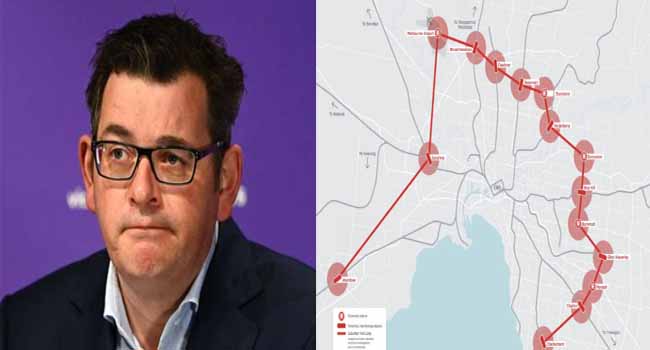 Victorian Premier Daniel Andrews has vowed to fix the hospital crisis engulfing his state by building a suburban rail loop that no-one in the state actually cares wants.

Andrews lashed out at critics of the uncosted plan, and said the solution to fixing the hospitals is to vote in a federal ALP government to fix a problem that is exponentially worse in ALP states.

“I don’t accept the premise of the question – this rail loop is wanted by the only voice that matters in this state and that’s the property development sector. How else am I going to keep this ponzi scheme going and infill the suburbs with shitty apartment towers and migrants?” Andrews said.

“I’ve never had any intention to fix the health care system despite being former health Minister and Premier for the last 8 years. So, you can whinge on social media all you like from your 8-hour emergency room wait.”

Andrews later stated that a further solution to the hospital crisis was more migrants and doubling the population again, and other solution that caused the system to collapse in the first place.

Given the sea of red (and teal) electorates in Fed election for Melbourne, I think it’s pretty much a given Labor will win state election in November… So buckle up for the next 4 years from here.

Last edited 1 month ago by DictatorDavid
1

Yep. Plus Matthew guy seems determined to kick out the last remaining conservatives.

Timely. More “independents” funded by rich people telling everyone else how they should live. Rules for thee and all that.

Looks like I need to brush up on Victorian politics.

but my general sense is that the majority are in love with Daddy Dan in a similar case of Stockholm syndrome as that experienced by the sandgropers in WA.

the progressive dreamers/nutters May well vote in some Teal Tokens who will give them a wokeish glow but achieve absolutely dick otherwise.

The fact that people will vote for a metro train loop which will benefit few rather than fix the hospitals/healthcare system shows just how silly these woketards are. Fat load of good train tunnels are if you can’t get access to decent care when having a heart attack or a stroke…

The train loop benefits the many by goosing house prices all around the city, no?

that’s visible. As are the resulting nice euro cars and boats and shit.

the statistics on beds/bods aren’t really visible, I bet. Out of sight, out of mind.

Yep, that is what it is all about and Minister Sinister mentions it too. It is about house prices and more people. The only thing of value that Melbourne produces is its way of life.

Ambulance ramping was happening in 2016, but everyone was ultra excited that the level crossings were being removed.

I wonder how dan collects the kickbacks from transurban etc?

That’s my view too. To get maximum value he will need to win this election and retire in 2024 before the state goes bankrupt and the hospital system collapses.

Didn’t Bracks get a $500k per year consultant job when he left politics?

I don’t believe it is Dan collecting kickbacks other than lining up lucrative post politics jobs. It is Pallas who signs the checks and he owns Transurban shares.

Ok but 500k is chump change

he could have made that much through semi honest work

how does he collect the real money

The 500k was a part time role at PWC. But that was 2008, so the Andrew Robb salary may be more ballpark

Paet of the problem is that the Victorian opposition seems to be a complete shambles.

If I lived in Melbourne I’d leave. The place is rooted.

Problem is there’s nowhere to go. This thing is global.

SA just declared climate emergency today. You can see where this is going.

Vic % would be higher.