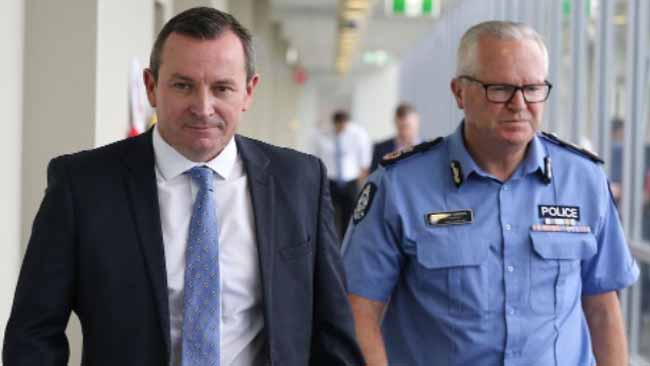 Opposition leader Anthony Albanese has confirmed that Mark McGowan’s appointment of Police Commissioner Chris Dawson to the Governor of WA role, would be outside the terms of reference of any federal ICAC.

Dawson, who will take up the appointment this month, was appointed by McGowan at the height of the COVID pandemic in a move dubbed ‘one of the most corrupt in WA history.’

‘No, Mark’s conduct will not be investigated by ICAC. That would be entirely inappropriate,’ Albanese said at a press conference.

‘We’ll only be going after our political enemies’ corruption, that is entirely clear.’

It is understood Anastacia Palaszczuk has already been granted immunity as she prepares for her inevitable post-politics Olympic Committee appointment.

All these dicks calling for a federal ICAC are beyond retarded. If Andrews hasn’t gone to jail for 8 years of solid corruption then no one is.

But it is not supposed to work like that. Andrews will never see the inside of a jail and that is by design. Jail is only for mid ranking public servants that break the rules.

That’s my point. It’s a dog and pony show for the normies.

Bloke will get a Chicom private sector job and then move somewhere else.

My money is that Andrews will be on the board of John Holland.

Give it time. They got Gladys, they’ll get Dan.

No they won’t. IBAC is weaker than ICAC. The Bailieu government was never going to pass a strong independent commission knowing full well their dodgy dealings would be unearthed and losing government.

This one doesn’t really work for me, as there are already anti-corruption bodies in each state and in reality any Federal ICAC would have nothing to do with State matters.

But jobs for mates – that’s the best gig in EZFKA, and a great retirement plan for former politicians!

Over the past seven years, the Coalition has perfected the art of stacking the Administrative Appeals Tribunal with former MPs and their advisers and pretending there’s nothing out of whack.

Attorney-General Michaelia Cash has defended the appointment of Cheryl Cartwright.

It’s a terrific gig – no set hours or days, with lots of help from public servants – and the coin isn’t bad either. A senior member can earn up to $391,940 depending on how many days they work. Even a regular member can trouser up to $249,420.

Compare that to the base salary for a federal MP ($211,250) or state MPs (about $160,000) and you can see why so many want to jump on the train. The new deputy-president, former WA attorney-general Michael Mischin, really hit the jackpot. He’s on $496,560 for the next seven years.

At the end of the day, the people responsible for keeping the leaders in check are…the people! If we don’t work together they get away with ever more. Perhaps heads will need to roll again literally if things get too far out of hand.