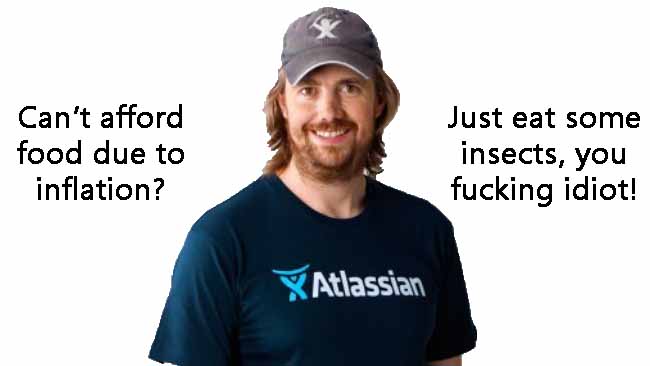 “He has also warned the world needs to change its eating habits by adding insects to its daily diet if the planet is to feed a global population of eight billion.

‘Insects are a huge part of a sustainable future,’ he said.

‘Always looking for interesting opportunities in that space!’”

Petrol and food going up? Just throw some crickets on the barby mate!

The usual rules applies, for thee not me. He and his family won’t be eating any of this shit, but he’ll be making sure you do. Why anyone would take dietary advice from a guy that has man boobs and looks like he’s never been near a gym or a steak in his life, I wouldn’t know.

Most of the rest of the article is a wank about Mike channelling Bill Gates by buying up farmland all over regional NSW. Part of me thinks this is to help drive up his investments in food prices and also partly to stash his money somewhere else in anticipation of a currency crisis. This is in addition to all his massive trophy homes across NSW and QLD, all to fight climate change of course.

I also don’t know why you would advertise where you might be when the plebs start getting hungry and angry and all that, but pride always comes before the fall.

Anyway, fuck this guy and the progressives that worship him.

He’s no different to the current throng of people simping for Elon Musk and thinking (a) he’s on their side and (b) will change anything for anyone other than himself.

These people hate you and want you gone – they always have, it’s just out in the open now.

Insects are a huge part of a sustainable future,’ he said.

My god, those are actually genuine quotes, without the usual sprinkling of funnies?!

also, I’m not so sure about the ethics of insect-eating.

if you want 300kg of “meat” from insects, you have to kill millions of them. How is millions of death preferable to just one?!

Last edited 9 months ago by Peachy
1

Ask the vegans, many of whom casually commit insecticide regularly, just because of minor annoyance.

This guy needs to be held down and force Fed maggots and cockroaches.

Only then will I be convinced.

This is the palace old mate lives in:

Has a swimming pool too. Does it fill itself up from rainwater?

Old mate also has a range of vehicles in his possession:

“Yes. I drive a Tesla (when not ride sharing). I have a small electric boat (Q30), an electric Polaris (Ranger EV) for farm work & looking at an electric tractor (Solectrac) at the moment. A little biased about such things! Always try to promote electrification where possible.”

Fuck me. What gives him the right to own all these vehicles all consuming vast amounts of resources in the production phase?

what gives him the right? Because he is part of the elite and we are not.

what a fucking lying tosspot. As if his “farm work” on 250 hectares is done by an electric Polaris. Couldn’t even mow the front lawn at that place without liquid fuel.

I bet the farm machinery and pumps drink a shitload of petrol and diesel.

Mr Cannon-Ball is a Cunt of a Thing. That is all.

How’d the sydney meet up go? I’d like to organise a perth one

We did not get to do it, I had family obligations, but I am still keen do one, perhaps after Easter would be good