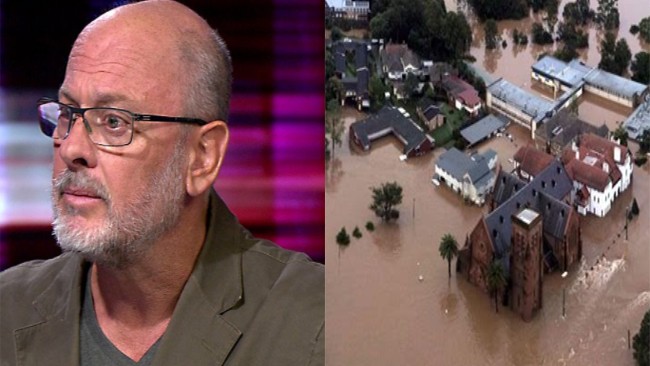 Tim Flannery has announced his retirement from public life on social media, before record flooding in NSW and Queensland put an end to it for him.

The man that pronounced it would never rain again has confirmed that he will not be participating in public debate, and that his decades long grift may have finally run it’s course.

“It’s up to Greta, Mike Cannon-Brookes and Simon Holmes A Court now to take the reins for the climate change doom brigade.”

Flannery is believed to be in talks with Dr Norman Swan and Professor Peter Doherty in starting a podcast entitled the ‘Chicken Littles’ Podcast.”

Never fear, the Climate 200 party to the rescue to uphold the grift.

Obviously I haven’t seen it but someone had the audacity to criticise the Ukrainian actions in the Donbas on Q&A and Stan Grant had him removed from the studio. So much for actual debate on this issue, it’s always been covertly shut down but now they’re doing it in the open.

For a guy who pushes sovereignty when it suits him I guess there’s no room for it in the Donbas. Gadigal yes, Donetsk and Luhansk no.

Last edited 11 months ago by canuckdownunder
2

Glad to see someone is watching Q&A so the rest of us don’t have too. I have tried a couple of times but the guests are just elitist arseholes echoing the opinions of their corporate sponsors or political masters.

yeah i saw that. unreal. didn’t even let the kid talk, some ukranian dickhead in the bg was screaming at him the whole time.

Climate change is such a big issue that Tim Flannery was happy to fly to China to make “Two Men in China”. How much carbon emissions flying to and from China with the support crew?