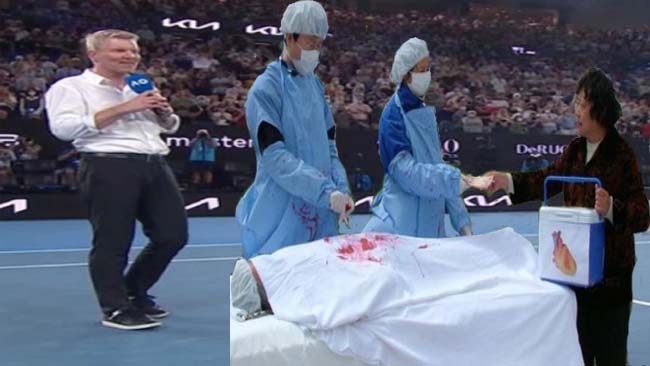 Tennis Australia has been praised for an authentic ‘Welcome to Country’ ceremony at the Australian Open this week, prior to the commencement of the day’s matches.

“We recognise China as the traditional owner of Victoria and that Taiwan has always been part of China,” Tiley told the AO crowd in Mandarin as the organ extracts were performed.

“We’d also like to acknowledge President Xi’s superb leadership as this tournament could not happen without him and his money.”

Peng Shuai also livestreamed a thank you message during her latest water boarding session, to let her fans know that she was ok.

Lol. For extra points, can anyone tell me why ugyhurs. As in why are the Chinese organ harvesting these poor schmucks, were not Falun gong enough 🙂

There’s nothing better than pasting thy enemy with crimes of thyself.
US sanctioned organ harvesting in some parts of the world which they invaded and it is not even a secret, some poor sobs were jailed at the altar of “democracy” for shows and giggles and justice “served”. Highest bidders in US and Israel get to live

I am yet to see a single verifiable evidence of chinks harvesting organs from Uyghurs apart from CNN-like media and “experts in the field” tall tales. The claim is like if UberAussies were harvesting organs from abo’s for their own use… LOL I’d believe without much evidence post-truth reports that chinks are hunting uyghurs like animals as a national sport and removing their children to be brought up by less darkie chinks, but organ harvesting story would be too much of a fantasy even for Tim Burton.

Hope that answers “why Uyghurs”
Because uyghurs are convenient

Nah it’s cause they are halal!

That’s the truth of it, right there.

These articles are so short, you should just post direct them on social media as text with picture. You will get a far bigger audience that way. People dont go to websites, 95% do not click away.

Superb photo in the article. Really captures the moment!!

You disappoint me. I thought you would already be onto this and speculating whether he would allow himself back into WA.

Here we go. More jabs for everyone.

There’s truth in there, it is devastating for needleprofiteering and affects those that ‘just carry the Zyklon B canisters’.

They are mastering their Poker faces with the lies they have to come up with to justify this.

If the majority of people go along with this for this round of jabs, I will fear for the survival of humanity. Nature abhors stupidity and will punish it ruthlessly.

I don’t give a rats arse about the CCP slaughtering uyghurs. The more the merrier. Uyghurs are muslim cunts and the sooner they’re erased from the earth the better.

Not everything the CCP does is wrong, and getting rid of Muslims is one of the righteous things they’re doing.

The 1984 surveillance state centrally planned, 99% conviction rate, etc I could do without.

Ben showering himself in piss once again.

As if the screen print t-shirt paired with the suit jacket and ponytail couldn’t make his face punchable enough.

He has to have been hired just for this purpose. I can picture his job description. Smug, arrogant cunt to give opinions for local propaganda rag. Must be the most annoying person in the world. Must look the part. Must have no friends. Must be a cocksucker. Must have no redeeming qualities etc.

How can he justify border closures now?

Easy to justify. No Covid in China and the students bring diversity and money, but thousands of cases in the East.

That should be popular with the public.

It will be popular with the elite. The ABC was running heaps of articles trying to seek sympathy for the students and migrants prior to NSW opening its border to the world.

What Joe and Jane Bloggs want has never been relevant and was completely made obvious during the pandemic.

And yet McGowan still has widespread support. I wonder what it’s going to take for people to say enough is enough?

They should feel right at home here too. There will be little difference in the government oppression between here and home.

This was the beginning of the end